Over on Google+ we have an active thread going on interesting real world underground cross section maps, an ever-fascinating source of inspiration for me. Photo dumps are cheap, lazy posts and I rarely inflict them on readers so forgive me for taking a tour through these before gearing up for the (supposedly) meatier posts this week.

The Wieliczka Salt Mine near Krakow is a jaw-dropping place: massive soaring spaces, whole ghostly cathedrals carved out of salt, and all. I got there a bare hour before closing time on a trip there in the mid-90s (I lived just across the border in Slovakia at the time) and had one of the worst bits of being tantalized in my life of traveling.

This is a beauty of a map (click to enlarge): 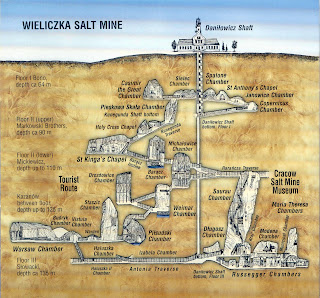 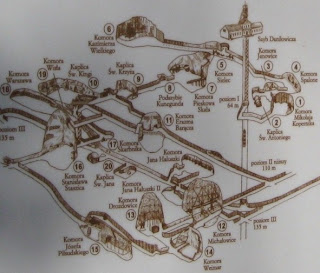 And an actual look down onto one chamber:

You have undoubtedly seen at least a little of the vast underground cities of Cappadocia in Turkey, but they never fail to impress me no matter how many times I take a gander. To get a sense of the sheer size of the largest of the 36 underground refuge cities, Derinkuyu, check out this bit from Wikipedia:

“The underground city at Derinkuyu could be closed from the inside with large stone doors. The complex has a total 11 floors, though many floors have not been excavated. Each floor could be closed off separately. The city could accommodate between 35,000 and 50,000 people and had all the usual amenities found in other underground complexes across Cappadocia, such as wine and oil presses, stables, cellars, storage rooms, refectories, and chapels.” 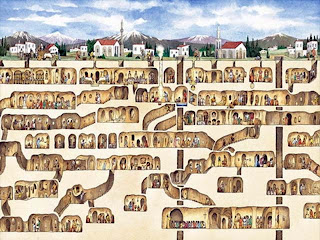 From-above map of one level:

Posted by Chris Kutalik at 4:21 PM