A Quick(ish) Tour of Revoca Town 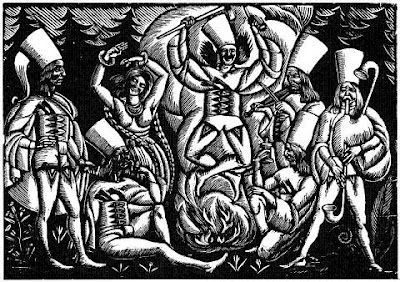 At first sight Revoca Town appears to be an atomized mess of bleak, narrow-windowed tower-houses and muddy alleys sullenly and suspiciously walled off from each other.

Admittedly, repeated glances do not disabuse one of that impression.

The town is, in point of fact, a brooding self-confined mess of mutual hostility, a sorry state only reinforced by centuries of Pikra-Svar, a peculiar local form of blood-feud characterized by ritualized passive-aggression and baleful stares.

An elaborately-embossed beech post-board--weekly festooned with a host of veiled slights, oblique satire and faint praise scrawled anonymously on small pieces of vellum--plays central stage for Pikra-Svar feuds. Rankled talk of such messages typically dominate conversation for weeks (if not months) over dinners taken in the dark shadows of the windowless halls, ultimately culminating with feigning even knowledge of the physical existence of the rival individual or clan.

Fortunately for the traveler, years of near-universal repressed neighborly hate has left each towerhoused clan intensely eager for outside company. Revoca as such is unique among the towns of the Hill Cantons in not only not wanting to utterly fleece newcomers, but in actively competing to host travelers. That is...for roughly a week in which time they become too familiar and find themselves suddenly and viciously put down on the board. 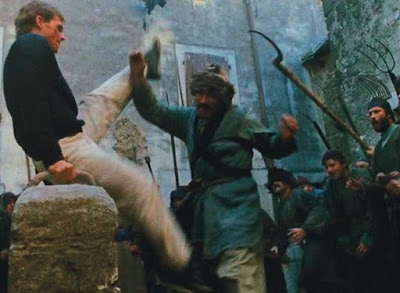 Princess Zuzu, Girl Wizard. The potent, precocious and precious Zuzu will trade and cast spells if you sit for tea with her and wear a party hat (and throw in some change for her next admiral's uniform). Totally not a real princess. 7th level User of Magic.

Svart the Woodcutter. Tight-lipped Xamuran rover of the mythic wilderness to the east. Though he looks like he would kill you soon as look at you, locals say he's the man to hire as a guide (50 gold suns or a 1/3rd share a session). 1st level Ranger. Hp: 8. Big ass axe.

Father Hog/Sister Sow. An immense, centuries-old, ring-eyed talking pig runs religious services in the community. Switching between the roles of a gruff but jovial, mustard-yellow-berobed Father Hog half the week and the world-wise, maternal, rouged, midnight-blue-gowned Sister Sow the rest, the pig manages to serve both the local Sundome and softshell-heretical Evening Star Lodge. 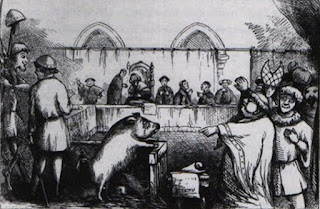 Places of Note
Our Lady of the Not-Lake. While most outsiders might recognize this as a flower-festooned, “country”-aesthetic pagan shrine to the Pahr lake godlet, Mojca (pronounced MOY-tsa) of the Tarn, locals will correct you, maintaining that this is, in fact, Mojca the Creek-Goddess. The narrow, broken-edged lapis-lazuli-covered pedestal the primly-painted idol rises out of seems to have been at one time a large circular (perhaps “lake-like”?) surface.

The Void Lodge. A rather large and tolerated community of heretics live in Revoca. Worshipers of Habeka the Lady are mostly members of the moderate Evening Star Society, but even members of the mystic sect the Starry Void have some aboveground representation here in the form of an underground lodge.

Which I acknowledge is a confusing way to put it.

Throvemesto. Miners make up a distinct community just to the west of Revoca proper. Behind a wooden stockade sit rows of tidy, stone dormotories. The miners, proud working folk, disdain both the “bow thugs” of management and the residents of Revoca who they view as insufferably "mental."

Hrad Morva. Perched up on the high mound north of town is the strangely contrasting sight of the Lady's castle. The bulk of an ancient earthen hill-fort jostles with the new-fangled chateau. 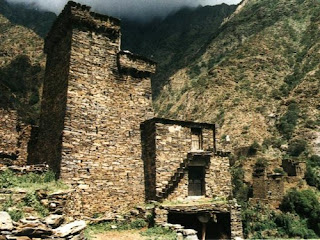 Places to Stay
Everywhere (see the first section above). Start with the better families with the sturdy well-kept towers near the market and then work your west through the increasingly immiserated clans. Visitors who have attained a Rank greater than that of Third and exhibiting a manner less than base are invited to dine and dwell with the most noble Knyaz Draga III “the Twitterlight" at her castle, Hrad Morva.

Or avoid the whole game (you would, with your coastal elite ways) and stay at the Four Dumplings, a quaint, three-bedroom, tower-inn run by the invasive and saccharine-friendly cat-masked widow Pani Velka. The cost in coins is cheap (5 silver ladies/night), the cost in emotional comfort immeasurable.

Places to Shop
It's simple, you can't buy anything but the barest of staples until the bi-weekly markets on Drunkday and Moonsday. Fortunately an aspiring border ruffian or murderhold procurement specialists wandering the rickety market stalls and charming refuse-decorated grounds can find an array of tools of the trade for purchase. There is always a chance of finding strange and enscorcelled items strangely on a random-seeming weekly-fleeting basis.

Revoca Town Fun Facts
Xam. Defying easy stereotype are the Xam, a tight-lipped, industrious and physically distinctive group of locals with dull-golden skin that seems to glisten sparkly in the sun. They as, a race, seem inclined to humble, physically-oriented positions such as shepherd, water-fetcher, pigkeeper or woodcutter. Uniformly curly bronze-red hair and gray-eyed with a look of perpetual menace, really they would kill you as soon as look at you.


The Xamuran Whistle. A regional dialect made up of  high and low whistles developed by Xam shephards, naturally expressing a limited vocabulary and range. Most all native Revocans can at least whistle a few cutting tones.
Posted by Chris Kutalik at 11:26 AM