One great advantage of four years of play in the same campaign is that you get the long-haul perspective on the effect of all your obsessive and ill-considered tinkering under the hood with house rules. Some become overtime Truly Terrible Ideas, others fall by the wayside, a few stand alone golden and untouched.

Most though just need some more applied tinkering. One of the oldest variants in the Hill Cantons Compendium (soon, knock on proverbial wood, to be updated and replaced by Live Weird or Die: The Roustabout's Guide to the Hill Cantons) is the Mountebank and as the Google Plus greys into solidly middle-levels it has become apparent that what worked for lower levels has become a decidely less interesting and capable class choice at middle levels.

(A big special thanks to Robert for the relentless Manzafrain the Mirthful and Jeremy for the much-missed Colonel for their playtesting—and to Evan for his own excellent, recent Vancian-inflected take on the class.)

What follows is a stick-bending of the class that may correct that falling off--or create new ones, that always being the pitfall. All input greatly appreciated. 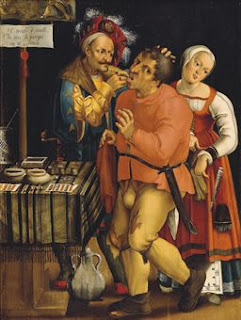 The mountebank is the consummate con artist of the medieval-fantasy world. By use of smooth talk, sleight of hand, and magical illusion the mountebank stays one step of the law—and earns a decent living in the mean time. Because of their specialized skill set they are often also employed as spies.

As a sub-class of the thief, they are allowed to wear leather armor and use any weapon. They are also allowed to pick pockets, move silently, hide in shadows, listen at doors, and back stab as per a thief of the equivalent level. They can further use disguises as per the assassin class. All saving and combat throws are made on the thief table.

They are also able to use a new skill, sleight-of-hand, at the level they can pick pocket--plus an additional 15 percent. Sleight of hand allows the mountebank to move, switch out, or otherwise manipulate without being noticed a hand-sized object.

At third and higher levels they begin to be able to use spells from the Illusionist class spell list (pick the version)--their spell assortment however tops out at level 11. New spells are gained by paying—or swindling—resident illusionists.

They are restricted to only using magic items open to thieves until ninth level at which time they can also begin to use items available to illusionists. An exception is for scrolls which they can employ at any level under the following conditions [Thanks to Evan Elkins for use of this paragraph]:

At ninth level, the mountebank attracts a crew of 2d6 grifters, con-men, and other ne'er do wells (1st level mountebanks) as followers.

Mountebanks cannot be lawful or “good” in alignment.

Beginning at first level, a mountebank can use their smooth fast-talking and arcane powers to create semi-magical effects. All abilities are dependent on the character being able to talk in a language understandable to the target.

Posted by Chris Kutalik at 4:36 PM