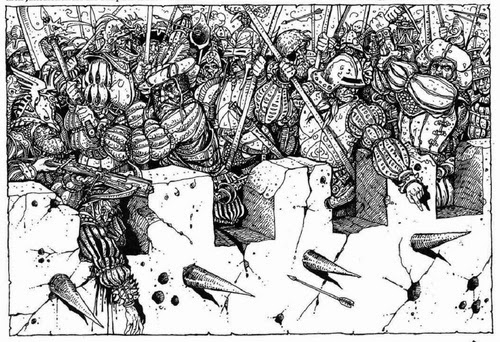 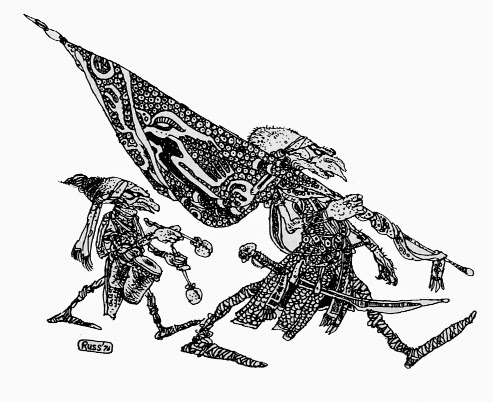 Got back yesterday after a rather grinding trip home from this year's North Texas RPG Con. So amazingly bone tired that despite the deeply scandalous time that was had by me and the other degenerates that I call my friends there, I am going to pass on writing the full gossip column of North Texas Confidentials of years past and instead trot out this not terribly deep and utterly subjective list of high and low lights.
Highlights
Hanging out in general with people from the blogging and G+ nexus. "Doc" Trey Causey, Robert “Half-Giant” Parker, Brad "Skullcrusher", James "the Mad Beekeeper" Aulds, Justin "The Sixth Blackrazor" Davis, "Shirtless" Jason Braun and others. Like real world conferences the event is made as much or more (no more) in the hallway conversations and bar table banging story swapping than in the official events.

Running my first full Hill Cantons Con game. This being a run through of the Golden Barge adventure site in the Slumbering Ursine Dunes mini-sandbox (which is in its last and final draft before editing). The party (Brad playing the talking bear, James Auld playing a feral dwarf and two Louisiana gentleman the Black Ratter and Ool the Dandy) managed to whip competently through the biomechanical barge in 3.5 hours and grab the long-lost macguffin of many a G+ Hill Cantons game, the Jewelled Codpiece of Radegast. Yay them. 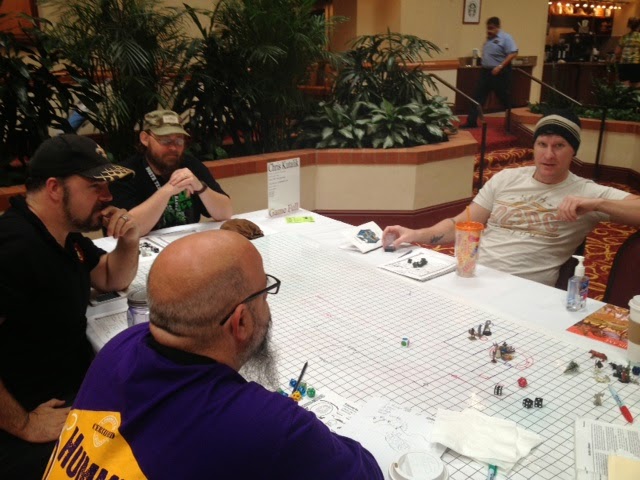 Having Jim Ward buy us a round of drinks, sit down at our bar table and proceed to spin out a deep dark round of tall tales about TSR. I promised not to tell. Give me another week.

Great conversation with Chris Holmes, son of the dude who launched my long strange trip through this game (J. Eric Holmes naturally). Incredibly wonderful stories about he and his father's writing and gaming side careers (lots of fascinating unpublished and/or out of print stuff out there). Look for an official interview in weeks to come.

Running for a half an hour of Tree Maze of the Twisted Druid after an extended whiskey binge and before having one of the players (cough cough begins with a B) pass out SITTING UP. Then realizing that I was too far down into my cups myself to continue running the adventure.

Barely surviving the worst hangover of the past four years (related to that above) and playing a cutting torch wielding pleasure robot in James Aulds's Anomalous Subsurface Environment game (I being apparently one of the 8 people in old schoolish circles who haven't read the game). Props to Gus L for the nifty hand-drawn character sheet and James for putting up with my seasick self.
Lowlights
Skipping too many sessions. Seriously this happens every single time I am at a con of any subcultural stripe. While I don't regret missing some of the carousing, I missed a welter of hot gaming. No one to blame but myself.

Not as many pickup games. The last time I went to the Con there was a lot of impromptu side action that really was more fun than the official sessions. Either I wasn't paying good enough attention (a distinct possibility with the slow poisoning of alcohol) or it was that the larger number and wider range of official sessions were enough in themselves, but I saw very little of that action this year.


Too many dudes. I mean really.
Posted by Chris Kutalik at 3:34 PM 9 comments

One of the most fun parts of writing up the Slumbering Ursine Dunes mini-sandbox has been putting together the now lengthy(ish) bestiary in the back. The booklet will have 15 unique monsters stuffed into it (that is if I have the willpower to stop cramming more in with each editing iteration).

One of the things I have tried to do throughout the campaign with mixed results is introduce a menagerie of new critters to challenge and amuse players with. Some have a foot in a fantasy reflected Slavic mythology, others have more than a bit of the gonzo (or just plain dumb) in them.

The War-Ocelot is one of the few that mixes a bit of all of them. 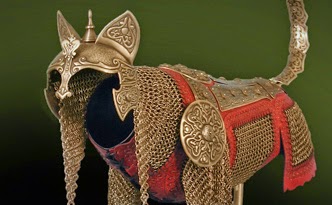 When the Boreans threw down their spears
And sprinkled Zem with their tears
Did Svat smile his work to see?
Did He who made the flumph make thee?
- The Ocelyt by Vilem of the Lake

The twin brother-heroes of the Old Pahr, Vlko and Romuilak the Lupine were the first to bring the dreaded cats of the steppes to this part of the world. With their horde of druzhinas, reverse centaurs and yes war-ocelots they carved a kingdom out of the black peaks and bottomlands of the South a thousand years ago. With such an entrance the war-ocelot demurely snarled into the pages of collected history—before vanishing anew along with that time-misted kingdom.

Centuries of selective breeding by Pahr nomads of their most beloved semi-feral ocelots had raised the adorable spotted critters into a bellicose, semi-intelligent companion. Bigger boned and wiry their feline frames were increasingly capable of sporting first elaborate harnesses and later full armored arrays complete with long piercing horn (not pictured in the transitional period array above).

War-ocelots are rarely encountered without their humans who they look upon as gullible marks who will dish out food and provide the empty boxes that make for prime napping in exchange for so little.
Posted by Chris Kutalik at 11:05 AM 5 comments