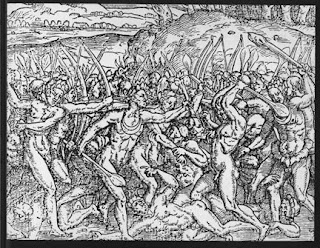 Mixing Up the Old School in the Lone Star State

I've been cursing the Deadline Gods as of late. These dark minions have thwarted not only a number of posts here on the HC, but, more tragically, my attendance at that marvelous confluence of old school forces that mustered recently at the North Texas RPG. The former will be fixed shortly as I finish up all the neglected half-written posts saved behind the curtain here. The latter...well...that's got me thinking about an idea.

The journalism world is lousy with social mixers. Seems like one can't go two weeks before another invitation to live up to the liver-destroying stereotype of boozy, hard-bitten newshounds pops up in your inbox.

In a second, yet related thought, I've been pleasantly surprised by the sheer number of people I've found online running, playing, writing, and/or pontificating around old school RPGs in the region. Even better, I have been greatly relieved to find that many of them are actually people I quite like.

Punchline: why don't we organize some low-key social soirees for old schoolers around here?

Here's the meat of my modest proposal:
1. We start by meeting one pleasant evening in my hometown in Austin and pick a nice, convivial spot downtown (preferably one with margaritas, mexican martinis, fajitas and other wonders of this fair city).

2. Like a good proper sandbox campaign, we'll have a casual "who ever shows up" kinda attitude to the whole affair. I'll make use of the plethora of social-networking thinga-mijiggys out there to get the word out (Meetup.com, forum posts, blogs announcements yadda yadda), but not sweat outreach overly much.

3. People will be encouraged to bring whatever campaigns, dungeons, house rules, half-crazed ideas they are working on for some good old "show and tell" (minus the frowning old witch of an elementary school teacher hanging over your shoulder). If more gaming comes out of this, more power to us, but we'll start with the casual and social.

If the idea catches on perhaps we can organize another one down in San Antonio (where we have a second HC now going) and further on down the road if others are interested.

So what do y'all think?
Posted by Chris Kutalik at 9:24 AM 3 comments