Super quick update and some show and tell. Misty Isles of the Eld has gone through layout and is just waiting on some maps and proofing.

Slumbering Ursine Dunes Kickstarter backer, old-school blogger and all-around good guy Jeff Russell jumped in the on the last minute to finish layout for the project. Not only was he a life-saver but he did it on our tight deadline, not a mean task given that this product is a good 24 pages longer than the Dunes (you know the actual crowdfunded adventure).

In other last minute happy news old school cartographer Cecil Howe has jumped in to do some of the site maps. I have been digging his work especially some pieces from Ed Greenwood recently.

Just to give you a taste of what is to come, here are some of the first round pages. Naturally many of these pages will get cleaned up and changed around as we work through the last step. Seeing all of Luka Rejec's art in one place made my jaded heart flutter a-new (and the thing is just packed with it). 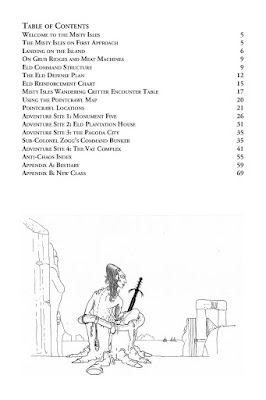 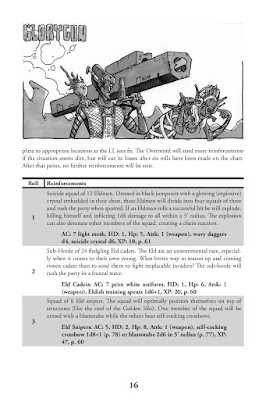 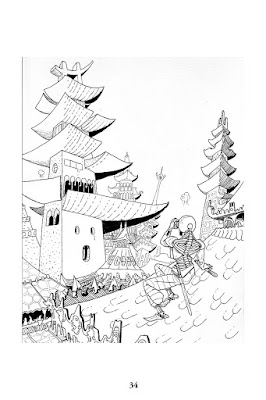 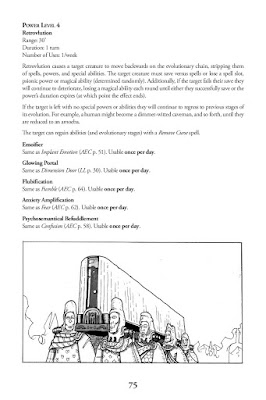 Posted by Chris Kutalik at 9:14 AM 1 comments 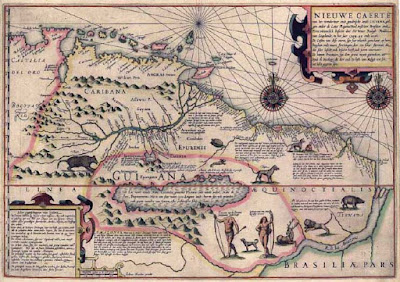 [Note: Building Dynamic Sandboxes Part I and II]
The gradual chipping away at mysteries both big and small is one of the central running themes of the Hill Cantons campaign. I am a big believer in the notion that every dungeon or adventure site really should have at least one or three nagging questions about why it is there or what is going on with its residents (both historical and present).

Just to complicate it further I also have a self-rule that each site's mystery or theme has to have a connection with either another site's or a larger setting one. Since I tend toward designing and introducing lots of small and medium-sized dungeons of 1-3 levels rather than mega or large ones, that means alongside the campaign news round up that I have had a pretty good working method to keep the layers of mystery dynamic and sustainable even after seven years of weekly campaign play.

That said, I feel like I have always been challenged as a GM in how to present layers of mystery players without it just being “hunh that's weird and inexplicable.” In other words how to achieve that sweet spot between keeping your cards close to your chest and giving players enough information and access points to make meaningful choices in the sandbox—and to have actual value to their advantage.

Early on in the Google Plus campaign, the players started using a term coined by Robert Parker (a player): “info-treasure.” Simply that coming along some piece or another in exploration is valuable in itself.

Classic D&D has a couple long-standing examples of this: the rumor table and treasure map. Rumors are like starting magic item equipment, small random items that can help a party (or be “cursed” and hinder with misinformation). Treasure maps naturally are straightforward as being directly tied into the reward system of well-aged D&D.

Punchline: Why not just treat Info-Treasure as a literal treasure type? 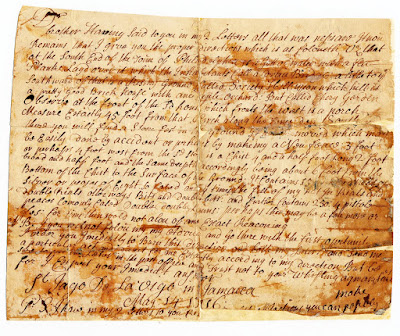 Here's a system that I started to work on that incorporates Info-Treasure into the time-honored B/X d6 dungeon stocking rolls.
Treasure Table
Roll d6

Examples:
Red Herring/Misinformation. There is a single muletrack that leads from the woods to the Lost City of the Angels. Also the Gopherman saying for “I surrender” is “Bree-Yark.”

Sketchy/Cryptic Clue.
Only roads beneath the ground lead to the Lost City of the Angels.

Minor Clue
Underground roads exist from all the local dungeons to the Lost City of the Angels.

Substantive Clue
An entrance to an underground highway exists in the eastern part of the basement of the Hall of the Ancient Hyperboreans.

Full Monty Exposition
Here are all the ways you can get to that damned Lost City of the Angels, also this is what's going on there.
Posted by Chris Kutalik at 10:19 AM 11 comments

The What in What Ho, Frog Demons 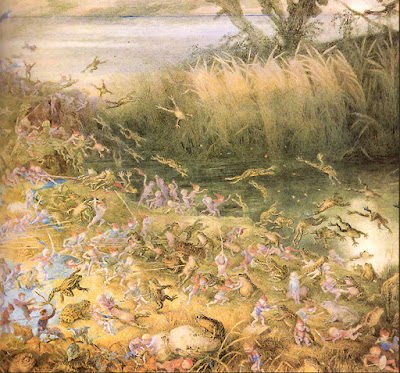 What Ho is going to be a little different from Fever-Dreaming Marlinko and Misty Isles in that it's going to be closer to the more modest 20-page small-adventure format we had intended the SUD bonus adventures (Marlinko was 72 pages and Misty Isles may end up around 92 whopping pages). That said it's still likely to jam in a lot of content and be something more like a mere 40-odd pages (ha).

Here's a little rundown of what I'm planning on throwing in.

The basic frame is that this is a “further adventures” style product that will either: a. give your players more things to do in the immediate region around the Dunes and/or Marlinko or b. give you small site stuff to drop in digestible chunks (basically what I do with most published adventures).

There are two small easily-portable, small-scale dungeons: the greatly-feared in-campaign deathtrap, Frog Demon Temple (a shout out to Jeff Reints's chaotic frog gods of Cinder and some strange bedfellow Wodehouse elements) and Beet-God Manor, a manorhouse that has been possessed by a massive sentient and quite demonic beet (you read that right, inspired by Clark Ashton Smith's Mandrake short story). As a bonus two other unpublished locales from Hill Cantons players will likely find their way in there: Robert Parker's delightful, hilarious Chaos Monastery and Mike Davison's Fane of Grooze mini-dungeon.

So basically you get four small sites to plunk down and play with. 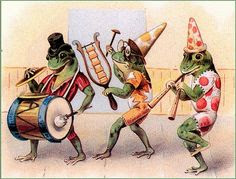 Expect a number of likely related bits including:
1. a hex or pointcrawl map of Marlinko Canton. Points from SUD, Marlinko and Misty Isles are included as well as some brief rundowns of local adventure sites like the Tomb of the Great Deodand, Lumas (Tower of Bone), Mountain Hall of the Hyperboreans, Bad Rajetz, and Revoca Canton.

2. A Frog Demon random generation system. I got some strong feedback from two backers about wanting something like this and it's a great idea (thanks guys). The system is shaping up to be based on the bio-diverse and delightfully strange range of actual existing and extinct batrachian adaptions (naturally with some weird twists and mutations).

3. Bite-sized Chaos Indexes for the sites that throw in some dynamic shifts.

4. Some supplementary info (mostly NPCs and Things to Buy) for greater Marlinko Canton.

As always a full plate, but I'm hoping to return to more regular(ish) content updates here on the blog. This year.
Posted by Chris Kutalik at 12:07 PM 1 comments

Bowie and the Eld of the Cantons

In my first year of high school, I gradually dropped away from the gaming which had pretty much shaped my identity and interests up to that point. I started spending most days escaping the post-war tract-housing boredom with that aimless kind of driving that happens with teens with no outlet (if you've watched King of the Hill, you've seen where I grew up).

Cassette-driven soundtracks hung all around us and was shared in equal portions by my friends. Black Flag and Minor Threat mixed incoherently--but somehow happily--with the 1970s glam of my tall, openly gay, friend Scott (not a small act of courage in mid-80s Texas). Mott the Hoople, T Rex and most of all early Bowie spun tales in my imagination of a place glittering and remote. Scott, tall, pale and a bit cruel, coolly dragging his menthols and trying to be for all the world the Thin White Duke was a mental impression that stuck with me for years afterward.

Hit the tape-drive warbly forward to five years ago and I have gone full circle and back into this hobby as an older man. The Eld, those strange space elves and substitute Melniboneans of James M's Dwimmermount, are carving out space in the Hill Cantons.

But invasive species mutate here in the Weird. Darkness is consuming my old friend back in the real world and find myself spinning Hunky Dory and Ziggy Stardust more and more. And with each listen more of that mental space and enduring image creep into how I see the big bad Eld in the campaign. They are cruel-lipped, thin almost fragile with a highly refined aesthetic.

So when it starts coming time to write and publish Misty Isles of the Eld and illustrator, Luka Rejec, starts asking his probing questions about what they look like among the long asides about brutalist architecture and fluted armor, my brain suddenly blurted out "think Bowie in his cocaine fascist Thin White Duke/Man Who Fell to Earth period and bulb-headed Melniboneans in Giger-like stormtrooper armor.” That it made sense to Luka was just affirmation that he was the right guy to run with the concept.

And he did.
In fact when I told him to surprise me with a Misty Isles cover (front and back above) that wasn't like what we have come to think of as rpg cover art, he sent me this and asked outright “too much Bowie?”

I replied “can you ever have too much?” I mean you could in his Let's Dance phase but whatever I am doubly happy we made this choice, a small, modest and off-kilter homage to the man.

RIP Thin White Duke and thanks for the inspiration along the way.

As my other best friend of that time, Mark wrote so well this morning: “He releases an album with death and immortality themes on his 69th birthday. And then dies. Badass right to the end.”

Posted by Chris Kutalik at 9:21 AM 4 comments