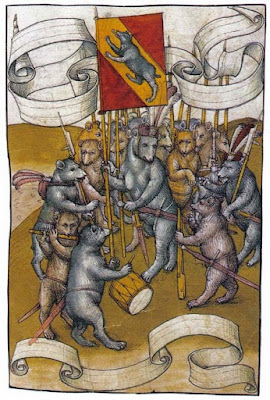 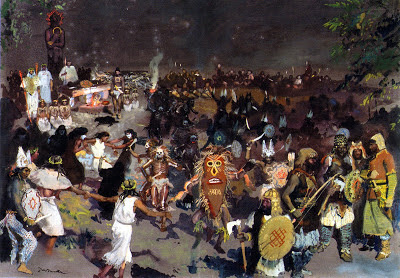 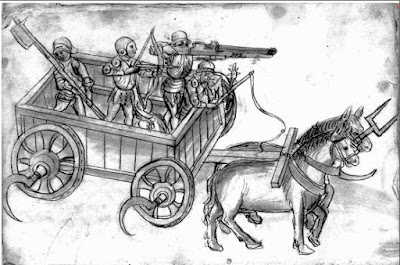 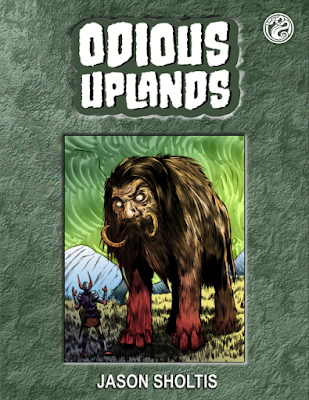 I'm rather enjoying my real world news mixing with my fantasy world news (you can judge which is which) so expect this to be a semi-regular post here on the blog.

In things Hydra Cooperative related, Operation Unfathomable's Kickstarter has been launched and is trucking along. The first stretch goal is hit which means the Odious Uplands, an entire already-written book-length wilderness supplement is a go. Strange Stars OSR is at the proofing stage and I continue to attempt to push through that last bit of writing of What Ho, Frog Demons (the fourth and last of the Dunes series). 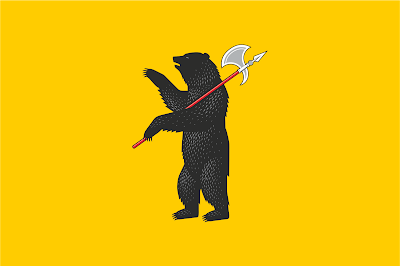 And Now the News of the Hill Cantons...
The fact-finding mission of self-styled Son of Mulmak, advocate of pan-dungeonism, is rumored to have met fierce resistance in the upper levels of the Mountain Hall of the Hyperboreans. An anonymous source in the Guild of Condotierre, Linkboys and Stevedores says that the party ran into unexpected new residents calling themselves the Servants of the Antagonist, Ha-Vul the Great Restocker.

The seemingly interminable election of the new Overking drags on with the 27 lord-electors continuing to bicker and maneuver and the powerless majority to debate and riot. A crowd of bystanders in Marlinko's Tomb-Plaza rescued a local Worker of Wood member who attempted to gouge out his eyes with an auger while simultaneously hanging himself on a self-made gibbet. The man was heard screaming repeatedly “please Sun Lord, just make it stop!”, an apparent reference to the length of the campaign season.

For the first time since the Green Rye Uprising, Medved, hirsute divine Master of the Dunes, has called the muster for all leveled war-bears. Under pretext of rough behavior, Pinc the Petulant, despicable petty tyrant of the pocket kingdom of Pohansko, has imprisoned a score of war-bears in his foulest dungeons allegedly to avoid paying back wages. Hosts of bearlings have been seen marching east and south through Marlinko Canton mustard banner unfurled with a new ballad on their hairy lips.

In the gaol cell I sit,
Thinking glaive-guisarme, of you,
And our bright slumbering home so far away,
And the tears drip my snout
'Spite of all that I can do,
Tho' I try to cheer my comrades and grunt hurray.

Brump! Brump! Brump!
The war-bears are mar-chin'
Cheer up cubs here we come!
And beneath the starry paw
We shall smell the blessed honey again
In the free dunes of Medved's sandy home.

In the battle's van we stood
When their horsey charge they made
And they swept us off
A hundred bearlings or more
But before they reached our phalanx
They were beaten back, dismayed
And we heard the roar of victory o'er and o'er

Brump! Brump! Brump!
The war-bears are mar-chin'
Cheer up cubs here we come!
And beneath the starry paw
We shall smell the blessed honey again
In the free dunes of Medved's sandy home.
Posted by Chris Kutalik at 11:12 AM 0 comments 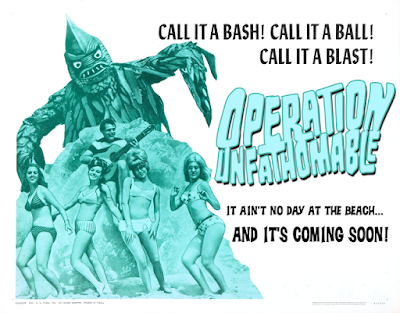 The Hydra Cooperative is about to make another big ole leap forward in coming weeks. Next Monday, October 10th the Kickstarter for the one of my favorite (and way too self-deprecating) creators in this little scene, Jason Sholtis, is bolting out the gate.

And yeah, yeah I know, like you, I have seen a thousand crowdfunding ships launched--many of them floundering still out there years later. But not only is the extended-dance remix version of Operation Unfathomable in excellent shape going in (the main manuscript pretty damn clean, a host of illustrations completed and even the stretch goal material written and edited), it is also has a damn funny, pitch perfect Harryhausen-esque stop animation video that even if you don't pledge you should check out.

[Guerrilla ads below and above by the world-famous Trey Causey, whose Strange Stars OSR is going through final edits.] 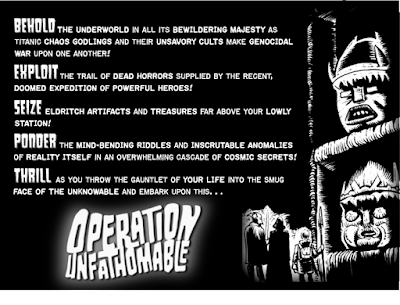 And Now the News from the Hill Cantons...
The Velveteen Group, operators of Marlinko's seedy-chic Black Pomegranate bathhouse were reportedly “going to bring a war without peril [sic] to the streets of the city” over the opening of an unlicensed, yet contrada-sanctioned new "grooming facility” in the Sullen Apriarian quarter by an obscure guild with origins in the Marches of Nur. Said group spokesman Pan Otkar “This so-called 'facility' with its lack of hands-on experience year in year out, poises a public health disaster to our city body. Traditional Marlinko bathhouses have delivered for centuries on the promise that any on-site pleasures will be mixed with the proper atmosphere of jaded weariness and sullen indifference.”

Floor plans for the new not-bathhouse can be seen here.

The Beneficial Society of Scavelmen and Engineers, Social has reportedly been testing campaign slogans for the Steeplejackers party claim to the Overkingdom throne on forcibly-detained groups of debt peons, glitter-slyphs and law students. Sources say that the focus groups have zeroed in on the catchy, yet opaque slogan of “Superlative Souls are Deplorable” as the party's new war cry. Fortunately with the electorate set at only 27 souls -- all of which already have their horses in the race – the slogan is nuncupatory.

The self-styled Son of Mulmak, proponent of the heretical theory of pan-dungeonism and best-selling author of A Brief Relation of the World-Dungeon Unitary, As it Was Delivered to the Folk of Marlinko is gathering together a field work expedition for the faux-meadhall haunts of the Mountain Hall of the Hyperboreans with the explicit goal of “proving that a subterranean spiderweb of byzantine tunnels and treasure-house sub-basements connects all to All.” Undoubtedly the all-loving Sun Lord will strike him down and all who follow him in his hubris.
Posted by Chris Kutalik at 9:43 AM 0 comments