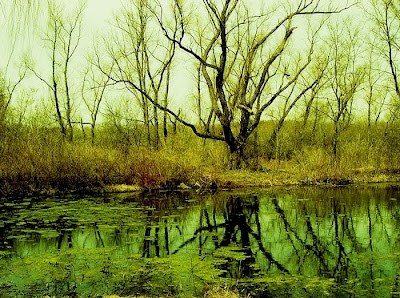 It's been quiet here blogside as of late, real world business, writing and gaming (ironically) have conspired to delay my triumphant return into regular blogging. (But really how much is there to say about a hobby?)

Besides the Reavers of the Weird miniatures campaign which launched this week with six players, the weekly Hill Cantons game has been going in some interesting directions in the new explore/clear/colonize the Feral Shore sideline. In other words doing domain-level play several levels before "name level" and firmly shaking out the notion that it is some kind of end-game retirement phase.

A thriving (if squalid) little Jamestown-like fort settlement has sprung up and the players have already accomplished some rather heroic (for their general murderhobo scumbaggery) feats such as freeing an old pagan god chained to a lakefloor (who they think is the Cantons version of the Slavic god Veles), finding a book of a god, clearing a massive dam made wholly of human bones, exploring the Valley of Grot and its temple, etc.

As the foothold in the Weird expands, I find myself adapting many of the collection of subsystems designed for the two Domain Game experiments and the Borderlands (yeah, yeah eventually). Here is one of the ones I am currently using to set out what kind of broke-in-the-head people would be attracted to a muddy little clearing in the howling wilderness. 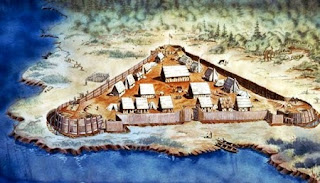 Settler Rules
Colonists can recruited to the settlement by the promise of free or cheap land. Colonists will only begin to arrive when the following conditions are met:
1. A two-mile hex and it's surrounding hexes have been rigorously explored and cleared of threats.
2. The players have set twice a week patrols of all six of those hexes.
3. The passage from the coast to the settlement is also explored, cleared, and patrolled.

Every three months a call can be issued back home in the Cantons. With each seasonal call, the player can grant and settle up a square miles of arable land in the settlement hex. Each hex is assumed to have four square miles of potentially grantable land.

Colonists work their own land and provide their own means, thus the players have no direct obligation to house, feed, and pay them as they do for their retainers, hirelings, and followers. They do however come under the obligation of paying taxes, tithes, fees, tariffs and obeying the rules set by the players within reason. An average rate of taxation—1 gold sun per family per month--will tend to not produce riotous conditions.

Roll on the following two tables for each seasonal settlement (or if a special campaign event calls for it).

Boring Immigrants Table
Roll d10
*Any emigrating family can be substituted for a family of tenant farmer if desired.

Tenant Farmers
Free farming family that works a leased grant of 40 acres in exchange for farming work, militia service, and taxes. Typical family will be five with three working bodies that are available to work the landowner's seeding and harvest. The household will provide one unarmored combatant with club, dagger, or other makeshift weapon.

Freeholders
Free farming family of five that works a purchased grant of 40 acres. In an emergency situation, the household will provide one combatant with leather armor and a long bow or spear/shield.

Military colonists
Family headed by former mercenaries, landsknechts or Kezmaroki bonders that works a leased grant of 40 acres in exchange for militia service. The household will provide one combatant with half plate, short sword and a pike or crossbow.

Boyars
Wealthy, but not titled landholder that purchases 120 acres. One family of five with 12 servants. In an emergency situation, the household will provide one mounted warrior with half plate, shield, sword and lance and three unarmored combatants with club, dagger, or other makeshift weapon.
Posted by Chris Kutalik at 10:19 AM 6 comments

Support RPG Micropublishing on the Cheap This Week 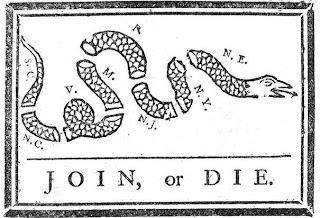 It's the Fourth of July, time to belabor some cliches and support the indy side of our hobby. While the Kickstarter boom/bubble/scourge (take your pick) grabs much of the spotlight there has also been a bit of an explosion from DIYers and micro-publishers

And what's more you can do it as a cheap ass this week with deep discounts at Lulu. The discount code of FIREWORKS will save you 25% (only today and tomorrow). And JULYBOOKS13 will get you 20% after that.

But wait there's more. I will discount the print versions of By This Axe and the Hill Cantons Compendium by 10% for the rest of the week: 35% off (with the same amount going to charity). Find all that here.

Not on Lulu but damn worth supporting anywho:
Scott Moberly, AFS magazine
Trey Causey, Weird Adventures
Posted by Chris Kutalik at 10:11 AM 4 comments

Reavers of the Weird: a By This Axe Mini-Campaign 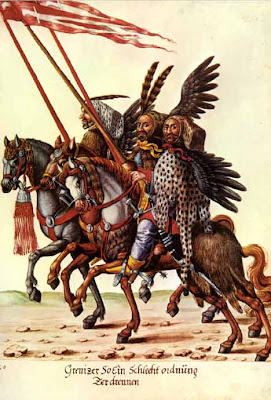 A recent idea by Deep Evan to run a wargame side counterpart to his Dark Country rpg one has fired me up for designing sections of the campaign supplement By this Axe (my medieval fantasy battle rules set).

Below is a free mini-campaign for 2-4 players to be used with BTA's battle and draft skirmish rules (drop me a line for a copy of that, it will only make sense if you have a copy of BTA). The campaign is hard-wired to have some interesting trade-offs against a small-scale warfare backdrop. Do I send out a small raiding party with less chance of getting caught—and less chance of creating havoc? Or do I send out the big guns? How should I spread my forces to guard my precious pigs and other assets?

Each player as part of his squalid little holding receives 30 pigs in his sties, 20 horses in his corrals, a village filled with tax-paying chumps, three blood-apricot orchards, a swollen (yet strangely beautiful) prize pig, a fine Southlands horse, and a charming (almost), rustically-decorated, black-timbered manor house. Ridding your opponent of his assets being the object of the campaign.

Each player receives 250 points to buy their initial retinue. Each band receives one Wildgraf or Boyar (that's you) and one Lieutenant for free. All figures must be grouped into units of two or more figures (who represent five warriors each) on their roster. 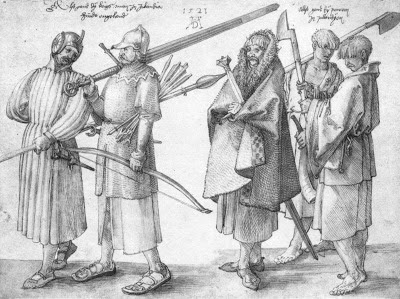 The Campaign Turn
Each turn (roughly a fortnight) the player can elect to mount 0-2 offensive actions (see below) and as many defensive actions as he cares. All actions are considered to occur simultaneously. The campaign ends after six turns and victory points are computed.

Offensive Actions
Each turn can assign a leader or general and accompanying units to conduct a raid (each force must have a leader). He picks one of the options from below.
Pig Raid
Steal Horses
Humiliate Villagers
Burn Blood-Apricot Orchards
Raze Manor 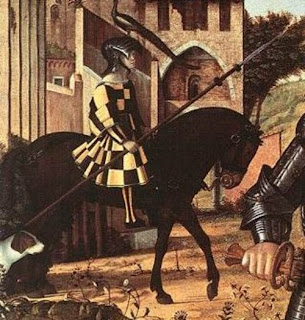