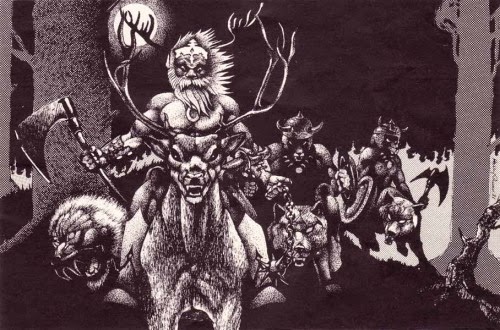 A couple days ago I had a strangely-urgent request from a two (and a half) year-old to read the Erol Otus-covered X2 Castle Amber (alternately titled now “The Giant Crashes the Castle”). When you get such a request only a douche doesn't comply and I duly read out the first three pages in High Children Books Narrator Voice.

While chuckle-making in itself it did give me an opportunity to reread that old favorite. I distinctly remember Castle Amber being the module that I enjoyed running over any other adventure TSR produced back then. Did it still merit top billing in my brain?

For sure I had no idea who Clark Ashton Smith was at the time (and it took me a full 25 years later to get acquainted with and dig his writing), but the Averoigne mini-setting folded up inside resonated with me in a way other TSR setting whoha didn't at that time. Growing up as a history fanatic, a France-like place circa 1100-1350 AD had a cultural reference point that made it easier to picture mentally.

Further because of that resonance, the gothic horror/weird fantasy elements of Clark Ashton Smith (not that I could have put my finger on it) just seemed sharper and more fantastic. That you would have pagans roaming the woods for human sacrifices or a blood-red comet that would induce an abbot to transform into hazy-formed beast struck me as more fantastic and terrifying than clearing a dungeon of humanoids in the Pomarj.

Restless soul that I am I put together a set of things I would do to hack, spindle and otherwise mutilate the module to fit my own play style and prejudices. In other words “gussing it up” a la Gus L's wonderful series of reviews and derailings of the old B-series modules. 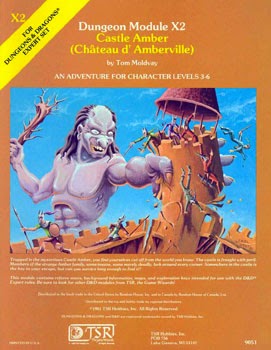 Derailing
Current me hates the railroady overarching conceit of the adventure that you are trapped inside the castle. Even less particular early teen me got bored with too many sessions trapped away from the main campaign area and put in some handwavy, deus ex machina gates at the end of each session.

Change one would be to simply remove the lethal sorcerous mist that clings around the chateau. What the adventure (dubiously) loses with the dramatic tension of the players having to scramble to release the curse on Stephen Amber (who is trapped inside his tomb) and escape the chateau, it gains with expanding the choices for approaching it as a site-based adventure.

Secondly, I wouldn't ditch freeing Stephen Amber as a potential framing quest--just replace the stick with a carrot. The trapped mage showers the party with big ticket value jewelry and magic items anyway, perhaps just have him appear as an apparition when the party finds the “clues” scroll (hidden in three spots) or some other trigger and promise the party cash on the drum for getting him out of his jam. The clues themselves give a nice framing quest for exploring Averoigne complete with some red herring so retain that.

(And while you are at, now that the party can retreat and rest outside like in a typical sandbox campaign, ditch that heavy-handed freebie bit in which Stephan magically protects the party inside from all harm when they rest.)
Chokepoints, Sideloops and Non-Linearity
At first glance the design of the “dungeon” looked very linear and dull to current me (you can see a copy of the map here). The adventure starts from a single point the entrance to the West wing and has a single hallway with side chambers.

Interestingly though some closer spatial analysis (see above) reveals it to be a more interesting space with slightly wider exploration choices (though one still a little marred by the railroaded single entrance and funneled exploration). Each wing (Moldvay suggests that each section is designed for a single session's worth of exploration) is chokepointed but all seem to have a few side-loops. The dungeon itself is relatively small but is nicely non-linear with two entrances from separate wings (the Chapel and East Wing) and two compact but internally non-linear side-sections.

While theoretically non-linear, the extreme lethality of stepping off the single path in the central Indoor Forest creates too much funnel for my taste. I would ratchet back or eliminate some of the thorn walls, pits and encounters. Let the players wander right into that Wild Hunt that breaks the hill open on there own.

Removing the railroad above really heightens the non-linear approach by eliminating the single entrance and instantly gives three easily-approachable front entrances to the West Wing, Indoor Forest, and East Wing (see the illustration) and numerous potential entrances through the numerous large-paned windows (though I would add some kind of challenge or obstacle to doing so like the windows being only breakable or high of the ground as the stairs up to the porticos suggest). Adding that front door entrance to the Indoor Forest gives players even more options.
Replace the Hex Map
The hex map of Averoigne is functional and fine though it seems pointless to have it be at such a large scale (12 whopping miles per hex giving long travel periods between the sites). The hexes are superfluous anyway as the sites are teased and the exploration presumed to be goal oriented in searching for the four quest items to open the gate to Stephen Amber's tomb (and thus less about meticulous 360 degree exploration).

Tim Kirk's map (above) is such a beauty I would just go ahead and swap it out for the module map, maybe adding a simple pointcrawl diagram to keep track of the players' positions. 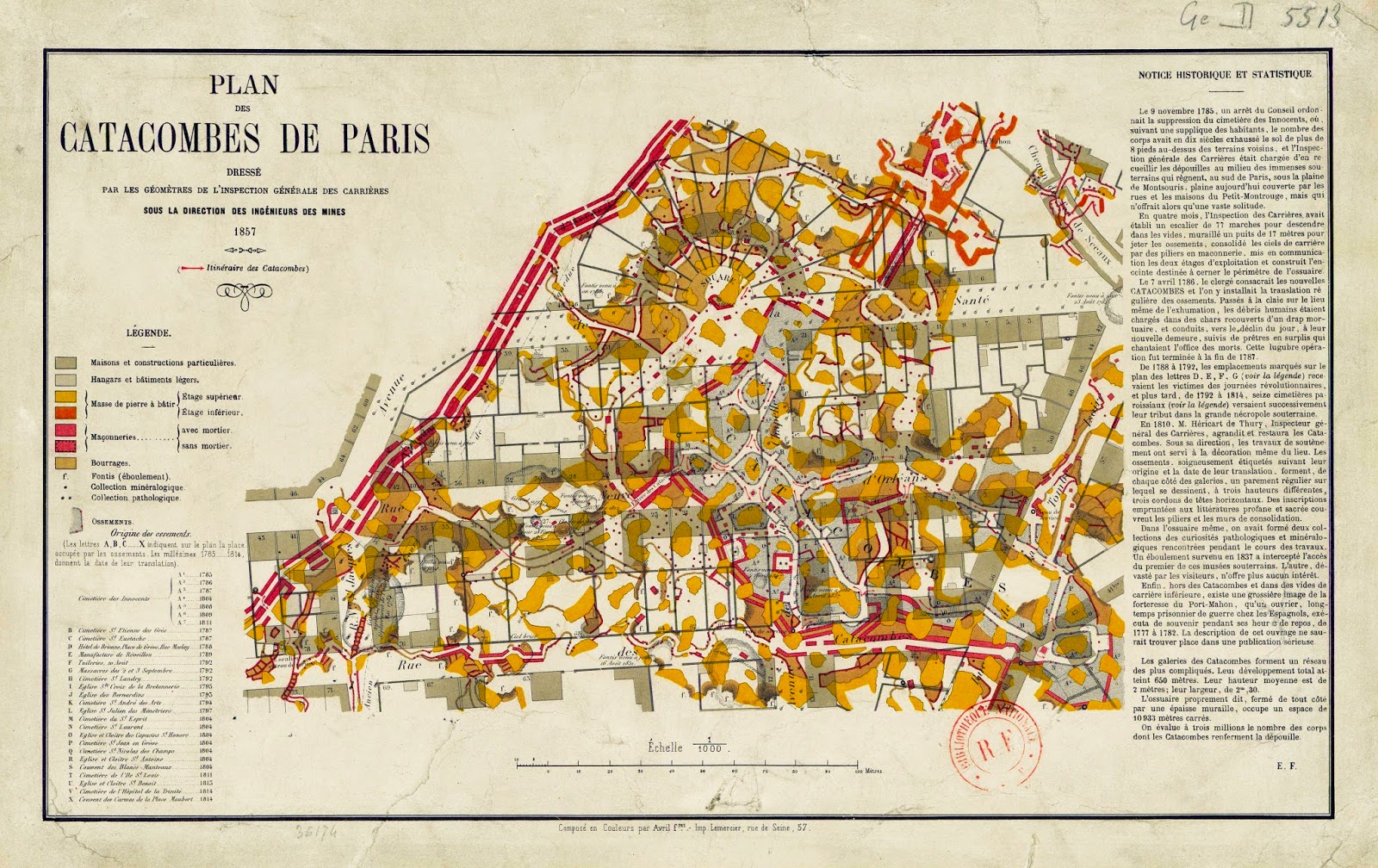 Kingdom of the Ghouls
One of my favorite bits in the module is Room 56 which appears at first glance to just be a boring old pit with some ghouls guarding it. The terse room description reveals it to be in fact a vast labyrinth and entrance to an entire land of ghouls (which naturally you had to develop on your own). I continue to eat up those kinds of challenges.

Fitting the faux-France angle here why not just take the fantastic sprawling maps and setting décor of the actual Paris Catacombs. Further make it an interactable place with interesting NPCs, hooks and internal tensions by reskinning the Dead Nations from Planescape Torment wholecloth.

Amp up the CAS
Rereading the module got me to also reread a few choices stories from CAS's Averoigne cycle. While Moldvay does a bang up job of adapting elements from the stories to a game context, I certainly felt that taking up his suggestion to expand the sites with unused elements from the stories was a good and noble effort. There is some weird fantasy gold missing such as the grotesque Mother of Toads in Les Hiboux, the haunted castle Fausseflammes, vampire lair etc that just cry out for someone with time on their hands to expand (cough, cough not me).

What would your Castle Amber look like?
Posted by Chris Kutalik at 12:36 PM 10 comments 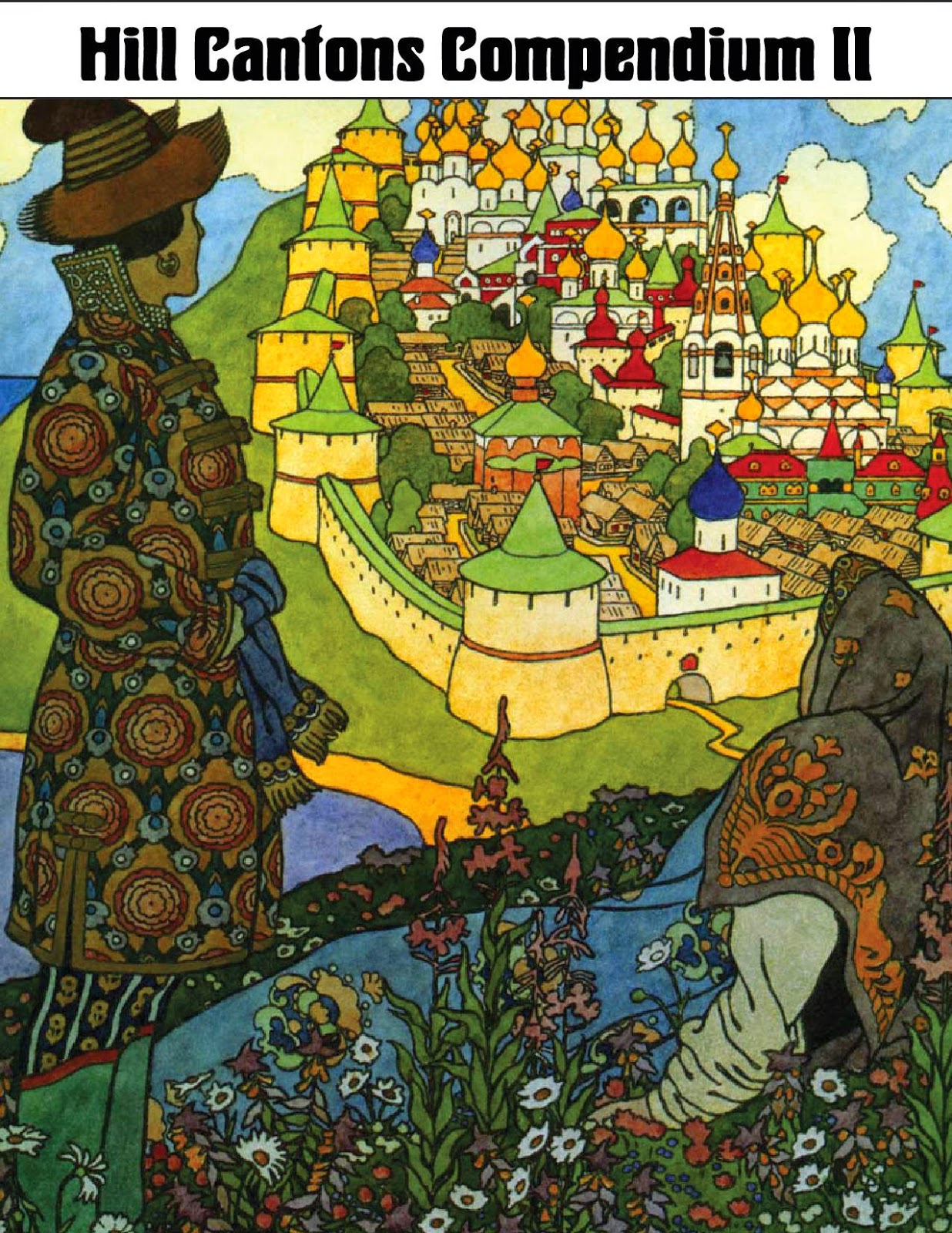 After half an eternity (in internet gaming circles time) the Hill Cantons Compendium has been revised and extended. You can Pay Whatever the Hell You Want for the PDF right here on DriveThru.

Gone thanks to Mike Davison's able layout hand is the clumsy (I would like to think charmingly amateur, but who am I fooling) layout and unused house rule sections. Expanded (almost doubled) are the number of dumb/brilliant player classes and I even threw several pages of special snowflake information about the Hill Cantons proper.

What you will find inside: