The Salacious Salon of Sxiploi 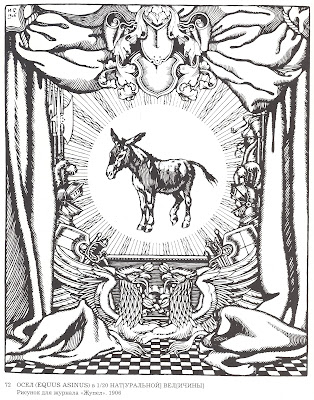 An excerpt from the upcoming What Ho, Frog Demons (fourth book in the Slumbering Ursine Dunes series) for your amusement, a little stylish sub-level inside the Temple overlooking the Hot Hell in which you can employ the Top Ten Books of Hell list (along with some other guiding boxes in the text to help with the demonic repartee.

Room 10. Cloakroom. Blixr, a sickly thin frog-demonette with flaccid urine-yellow skin and a loose-fitting (but immaculate) white uniform fronted with golden braid sits on a tall stool here behind a counter. In a terse, heavily-accented croak she ask for cloaks or other outerwear, producing from a slit in her wane neck an obsidian token in exchange for the article of clothing. A delicate cape made from ocular-bat wing membrane (worth 150 gold pieces) and a heavy ermine coat with thick shoulder pads and inexplicable rows of cast iron barbs (worth 500 gold pieces) hang on a rack behind her. The demonette will only attack if the cloak rack is disturbed.

Taking more than one has no consequence.

Room 12. Salon. The salon is decorated in the clean, crisp lines of Late Hell Modernist style: bare, polished rock floor with light thin metal gas burners (mounted on the wall for illumination) and a long airy window on the southern wall emitting red light. Through the glass panel (which overlooks interdimensionally the Hot Hell), a massive pillar of fire can be seen arching up from a plain of volcanic glass littered with styrofoam cups. A low, black wood coffee table has three tiny artfully-arranged delicate bowls containing decorative ebon black, pale green and blood-red pearls (worth 2,000 gold pieces each) and a platter of giant fly thoraxes wrapped in lammasu bacon.

Lounging on three low, sleek hobbit-skin couches are three Type B frog demons, Kanvmp, Hilrtnoc and Vasescltz, debating and discussing the political dimensions of soul-juice derivative markets (they vary in the difference of regulation of said financial instruments) and Hot Hell literary trends with their host, Sxiploi, a severed donkey head resting on a velvet cushion. The demons will react to apparent sharp points by the mute and long deceased head. The debate is punctuated frequently by droll, cutting gossip about local Marlinko human notables.

The demons will not immediately attack but will demand that party member participate in their conversation. Failure to provide more than two real-time minutes of interesting conversation (or attempts to steal the table bowls or otherwise be a boor) will bore the demons enough to fight, otherwise they will let the party come and go with no fuss.

The Hill Cantons in Its Bottom-Up Infancy

The Hill Cantons campaign is eight years old this week (the blog following later). Happy Birthday, you don't look a session over 400. In another eight years it's going to get off its ass, go get a driver license and take a miserable job stocking groceries to earn its damn keep, mister.

Now that the HC has a published life--and worms its way into the most unlikely of some of your weirdo world spots--looking through the old maps and notes the incredibly modest, bounded and radically bottom up nature of the campaign at its get go hits me like a brick. Running a weekly game—plus publishing—over eight years of mostly just-in-time production creates so many layers and layers stacking upwards that looking at the first seems alien.

Take this. This is the original players map. The original play area was a tiny space, a mere 20-by-20 mile area—what is now known as Ostrovo Canton (north of Marlinko Canton and one of 32 current regional maps). The map was hexless and vector based with an intentionally slower “exploration” movement.
It was small geographically, but it was dense as hell.

In two manic pre-launch weeks (what a difference having kids make) I drew up around 30 illustrations, cross-sections and site maps (here are some samples). I cut corners by only stocking half of the first level of the two big tentpole dungeons with 4-7 mapped levels and loads of micro-dungeons.

And then I threw in a heap of other people's work (something I completely stopped doing that I sometimes regret). That un-named castle in the woods to the north? That's Castle Amber. And looky there, there is Sham Bowman's gonzo-erffic Dismal Depths. And yes that is that Bone Hill.  Later replaced by Lumash the bone tower with a reskinned Silent Hall (Major Xhom!) from Stonehell.


To prep for holes and to break up travel, I brainstormed a list of 12 “floating sites.” If I rolled a 2 on an encounter check on a d6 I would then roll a d12 (crossing of entries) and blam the party would encounter a tower of homicidal, foot-chopping landsknechts or a small seedy tavern run by a crow-footed hill-witch. I still use this method to this day, constantly replenishing the pages of the same tattered spiral notebook.

Monsters pretty much were “what's in my miniatures collection”--with reskinning to make them occassionally quite weird. Ghuls and ghost minotaurs because I only had time to prime the figures. The Eld originally just being “mysterious veiled, red robed humanoids with spears” based on my large collection of El Cid-era Andalusians (only becoming the Eld when James Mal started writing about Dwimmermount play sessions).

There was no real world setting either, just a vague idea of two human never-to-be-visited core domains and a vague idea that this was culturally late 15th century Bohemia as imagined by an acid-riddled Jack Vance—with sleestaks, Howardian kozaks and Cthluhu shit.

The only NPC interaction and motivation was “here's a map you inherited, nothing happens here, go explore.” Yeah, yeah I've written extensively about how quickly all of those things evolved away no need to go on, grandpa. But, man,  from little acorns do big oaks grow.
Posted by Chris Kutalik at 9:58 AM 6 comments 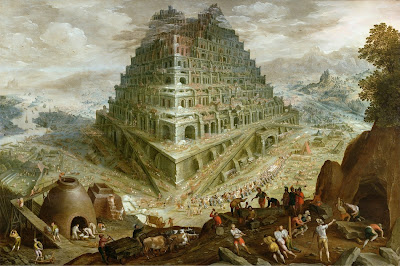 In Marlinko still literally up and arms about the War Bear March on Pohansko—and hotbed of “Kozer” activity—the cantonal Rada has met in emergency session to reportedly (and incredibly) consider “Marlexit,” a secession from the Overkingdom proper. Meanwhile several dungeons, both new and restocked, still remain free to loot, pillage and die ignominiously and forgotten in.
Posted by Chris Kutalik at 12:20 PM 2 comments 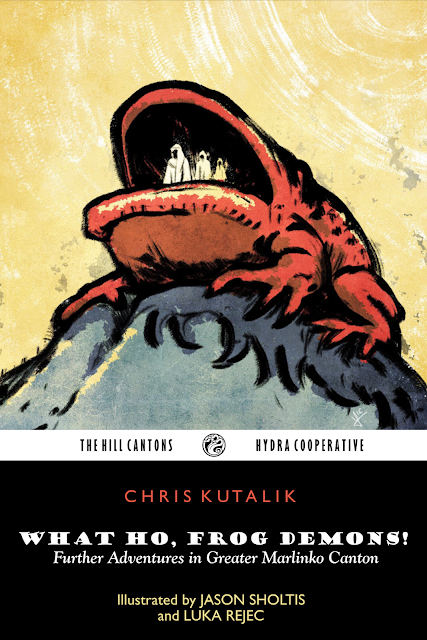 Just as we close out the Op U Kickstarter (oh yeah by the by Misty Isles of the Eld and a heap of A-side OSR work is on super sale at the Bundle of Holding), we started down the last phase of the Dunes series. I finally, finally passed over the draft manuscript to the distracted hands of my editors the fourth and last adventure What Ho, Frog Demons. While it's not the 100+ page monster of the Misty Isles, at 30 pages and growing it's still a lot more than the 12-16 page product of micro-dungeons we promised.

After a good deal of insomnia agonizing about whether it all hung together as well as its sequels I think I am getting to the place about feeling good about what's rolling off the line. The master of font and trade-dress mimicry magic of Trey Causey working with a lovely anuran illustration from Luka Rejec (another brother from another mother) have us already good to go with this great little homage/satire cover--very fitting for the terribly misguided mix of Wodehouse, gonzo D&D and cosmic horror satire that's the theme for this one.

Basically beyond my usual quirky meandering sections, you get two quite different, but ballpark theme-linked small-scale adventures that have been specifically designed to be either wholly slottable in most home campaigns or run alongside the hooks and chaos index of Fever-Dreaming Marlinko, Misty Isles and the Dunes.

On one hand you have the low-level trap-hell dungeon of the Frog Demon Temple with its wandering squads of booby-trap laying frog-demonettes, gratuitous deadliness and hell-spawned literary salon on one side and on the other the building tongue-in-cheek horror of the Manor of the Beet God, with a rising Infection Index dynamically changing the nature of the site as the players chose to explore or ignore the mounting menace and mystery.

Let's see if it works.