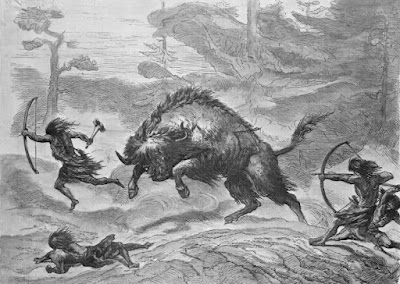 Given the frequency (and wisdom) of player-characters deciding in D&D games to run the fuck away, the game's IGO/UGO movement kind of falls down on having a satisfying way to adjudicate a foot chase. With the previous Hill Cantons session on “pause” with a dual snake-headed giant in hot pursuit of the party as it madly ran out of a lush pocket dimension behind a dungeon mural, I found myself scrambling to come up with something that would spice it up.

Fortunately my Hydra partner, Robert Parker had come up with some pretty nifty and suspenseful ones for his Savage World of Krul campaign and with the help of fellow-player Cole we hammered out a set of rules to use for the session. So here's the amended set of Robert's Rules.

Pursuit Rules
Each round of pursuit is considered to be an abstracted partial normal round. All movement is random (see chart below) and simultaneous.

1. Movement during a Pursuit. A character or creature rolls 1d6 for each 30' of normal movement. Each pip thrown is worth five feet of movement (rounding up to the next 10 foot increment if using a 10-foot gridded map). That's the total maximum distance covered in the round.

A pursuer ending a round five feet away or less may make an attack.

2. Fighting or Other Actions During Pursuit. Making an attack, closing a door or other similarly lengthy action reduces the above movement die roll by two dice (making 60' foot movement impossible, 90' one die only and so on). Spellcasting, mapping and other action taking concentration is not permitted unless the character opts to end fleeing or pursing.

3. Monster Gives Up. A monster chasing must make a morale check for each 60' increment it falls behind after the first round. If the morale check is failed the creature makes a doleful or bored noise and gives up the chase.
Posted by Chris Kutalik at 1:47 PM 4 comments

Misty Isles Behind the Scenes, Cut Art and a Review 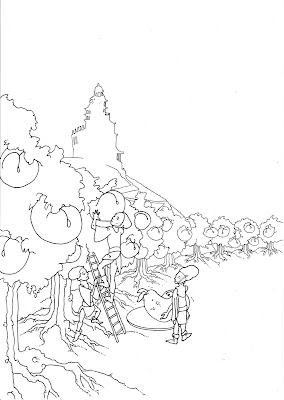 Quick post to highlight a couple mole-like appearances of my new mini-sandbox, Misty Isles of the Eld, around the web.

Yesterday I had the chance to write up a behind the scenes piece as a guest poster at Tenkar's Tavern. I threw in several incredible pieces of Luka Rejec's that sadly didn't make it into the final print product due to text flow issues (two posted here, the top one being Eldmen slaves working the stim-jam Plantation House).

Also here's the first Misty Isles review from the always-interesting Eric F. over at Swords & Stitchery. His ten point has my brain popping about deviant variations in how the isles could be run at the table. Good stuff go check it out.
Posted by Chris Kutalik at 2:12 PM 0 comments 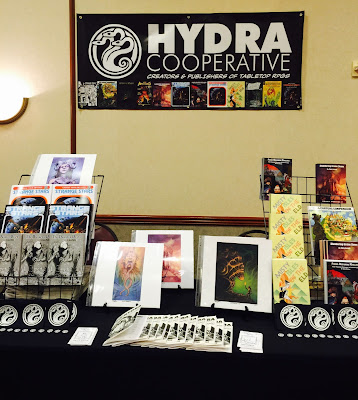