For going on six months now I have been doing an on-again/off-again read/reread of favorite or suggested sandbox products. Unbidden the same driving question keeps popping into my broken brain: what particular set of things makes this product so damn good? (What makes it shitty or mediocre being an interesting and useful question for another time.)

I have something like 30 unfinished blog posts beating, beating in tell-tale-heart urgency from my draft box and some of them are various attempts to move those margin notes into a blog series. Reckon it's time to whip those recalcitrant posts into publishable shape.

Before I kick off the series though let me set the frame. Imagine the standard disclaimer here these elements are what make a particular sandbox pop me for me, your own mileage may vary blah blah blah. You will note that how I frame the criteria precludes a number of much beloved sandboxes and hex-crawls.

Lines had to be drawn.

That said I am curious to hear if you the reader were making this list what would you include? What particular thing inspires you or helps you run it? And what products would you through on your High Fidelity Top Five list?

What constitutes an exemplary sandbox adventure: 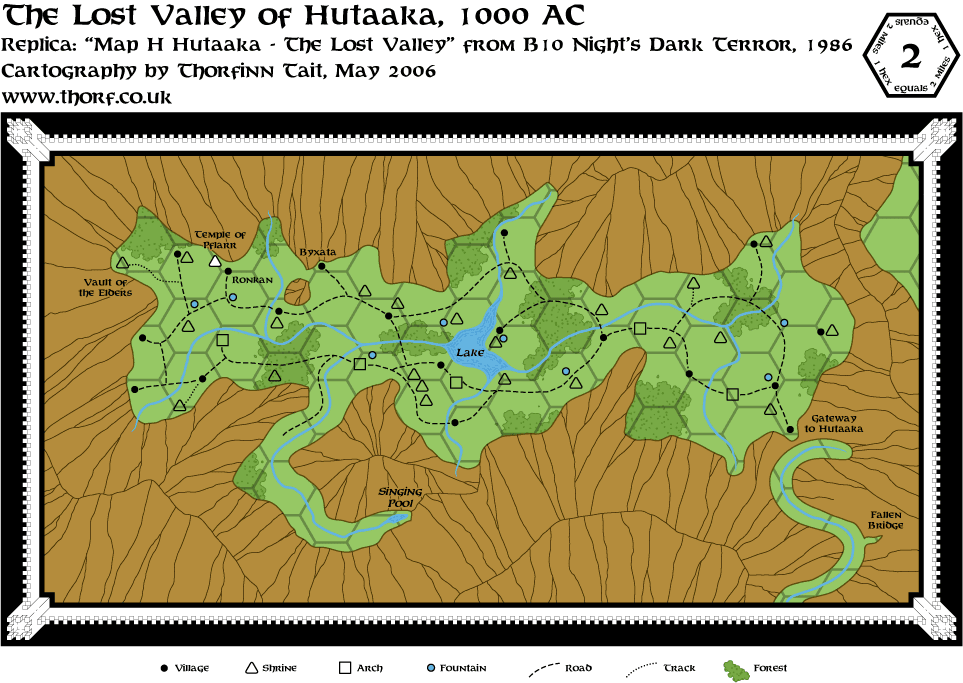 Sandbox adventures to be examined (ranked loosely by personal inspiration):


Almost rans (ballpark goodish, that may or may not be thrown in):
Posted by Chris Kutalik at 11:57 AM 9 comments 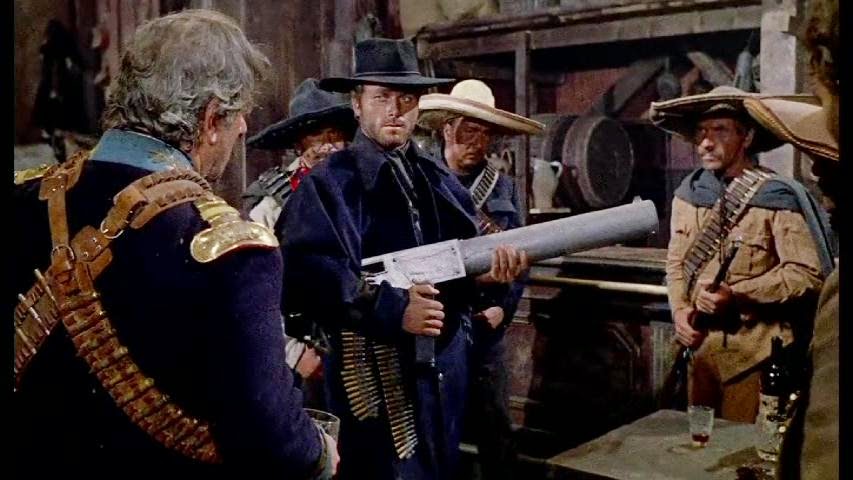 I am a little behind in prepping for the Boot Hill Cantons mini-campaign I was going on about a few days back, but here's something of potentially wider use for folks running Boot Hill and other western campaigns. Texas-sized thanks to those beautiful broken minds on this Google Plus thread that helped me crowdsource the baroquely over-done table at the bottom.

Starting Gear
All starting characters come with cheap but functional range clothes, bed roll, canteen, poor-quality horse and $5 to their name. Roll on the following charts for the rest of your gear.

Distinctive Piece of Finery
Pick or Roll d20 Once

Hogpieces and Other Primary Killin' Implements
Roll d10 Once 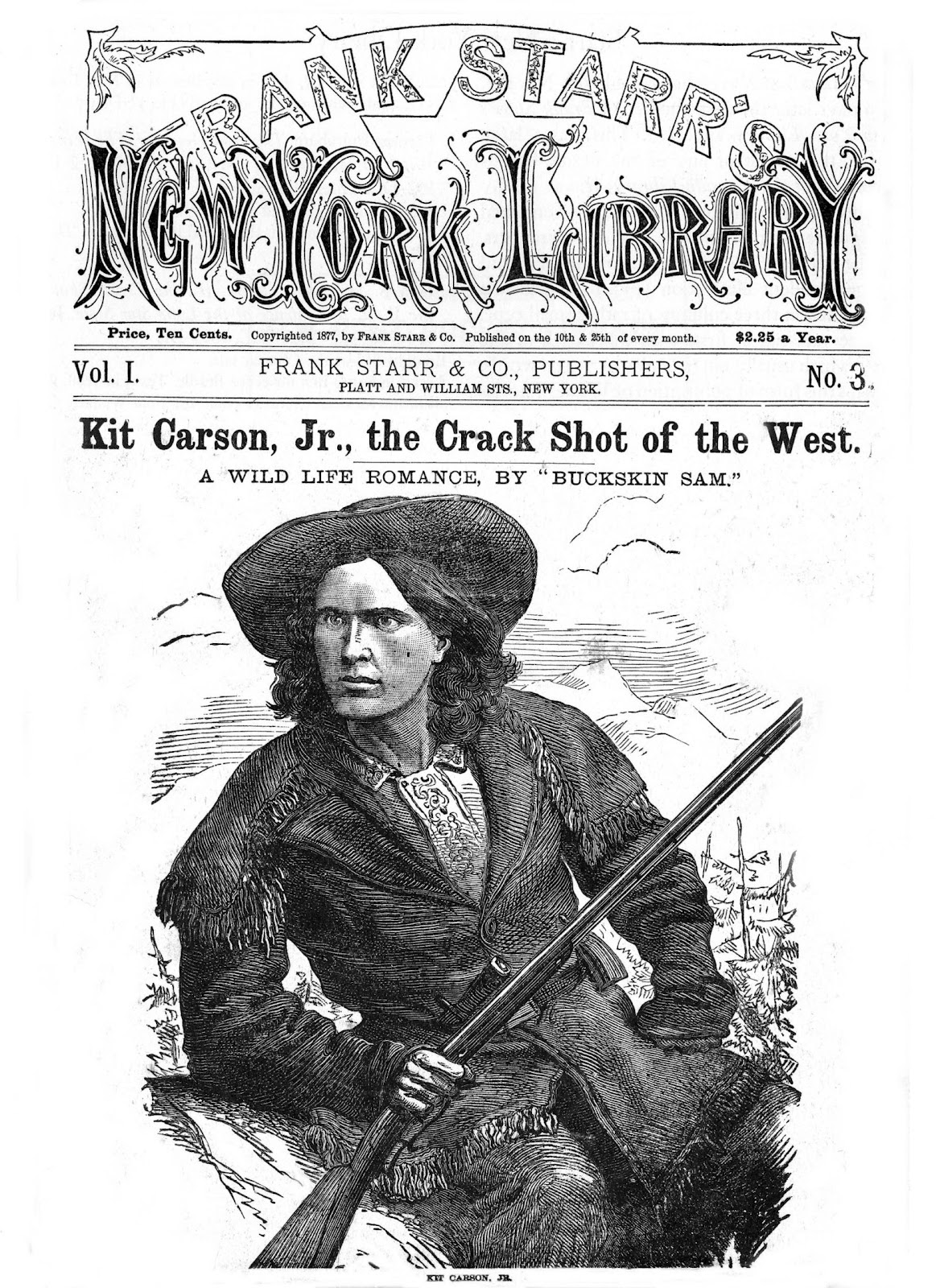 Posted by Chris Kutalik at 9:53 AM 6 comments

It's summer and I have been predictably getting a little restless and low in the batteries. Time for another mini-campaign to break up routine.

This time about I am going to swing back to the murderous rapine of that Boot Hill (second edition) one-shot I ran a while back. I'm unsure exactly how many sessions this thing will go before it ends, but I think I am going to just expand off of the last dust-up.

Keeping the same town (with a hex map of the surrounding area) and keeping a scoring system in place. Points are going to be scored either individually but with the option to share for collective activities if the players want to. For example if they rustle a herd of cattle they can take individual shares of the point take (or one player takes all if he decides to cross his fellow's and kill them off).

At any rate one player is going to win--or at least several tie. That should punch up the mayhem factor a few notches. It will be interesting to see what happens with a variant of the Prisoner's Dilemma game in place. Hell I will probably even throw in a prize for the winner.

So without any further adieu the revised Marauding Point System, local NPCs and the starting hooks. (Hex map of Cantones County coming later.)

NPCs
Captain Ferral. Former Confederate bushwacker, discharged from the Texas Rangers for being too psycho tunes for that outfit. Meanest son of a bitch you ever met, though he never killed a woman who didn't have it comin'. Heads up the Moderators.

Jay Augustus Jissom. Semi-famous cattleman and trail-breaker of the Jissom Trail. Has set up a dry goods store in Cantones de Los Montanos to rival the monopoly of the Evo's-- and consequently touched off the Cantones County War (the Evo-backed Moderators vs. the Jissom Boys).

Claude Evo Jr. Cattle baron son of the gunned down Claude Evo. A spitting image of his father right on down to that damned bolo tie.

Frank Stripes. former doctor run out of his Mississippi practice for unwholesome phrenological studies with the craniums of dead convicts and vagabonds. Every once in a while--deep into his jug of corn liquor--he will slip up and introduce himself as “Phillip”.

Vilem “Bohemian Bill” Psanec. Fastest Moravian in the West. Laying low in the area after the Bad Rye Massacre. Has a fondness for slivovce. Officially neutral.

“Wild Bill” Hickock. Still in the area after the big shoot out drowning his sorrows in whisky and gambling. Fixin' to run on up to a little town called Deadwood.

Bat Masterson. What authorities there are over in the county seat in Broken Oath City have employed this dead-shot lawman to bring a little law and order to this side of the county. He's rumored to have a six-month contract in place before he moseys up to Dodge City.

Boss Peckerwood. Chubby, petulant former opera singer. Chief foreman at the Big Moran Mine and colder than a whore's heart on Sunday.

Paco and Tuco Ramirez. Twin brothers and “comancheros” (traders who illicitly trade with the Comanche). 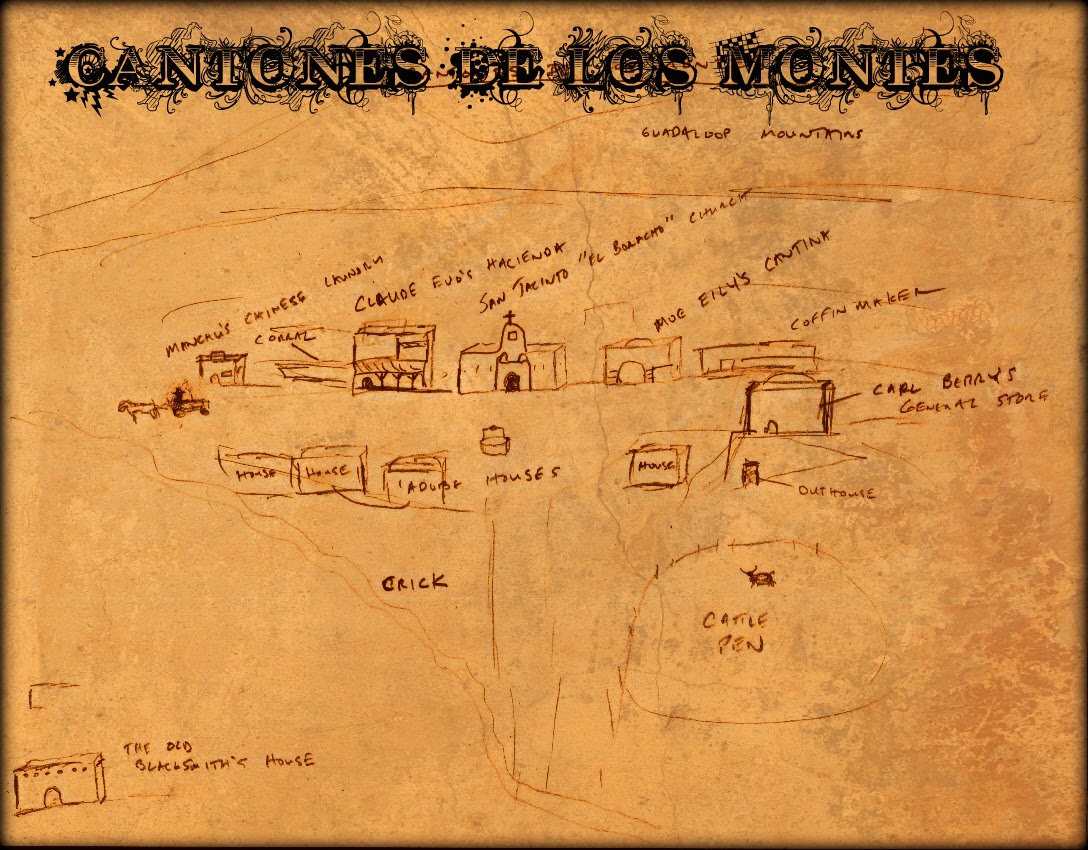 Local News courtesy of Breezy Pete
Reckon that the Moderators and The Jissom Boys are hiring gunslingers seeing as they are evenly matched with five pistoleros a piece. See each of their bosses for hiring on.

It's said that the Ramirez brothers want no one less than Bohemian Bill dead but of course are too low down and yellow to do the deed themselves. They are offering 150 silver dollars to any one who cuts him down.

Well and come to think of it speaking of killing for profit, I reckon those locked out silver miners up there want that old sow Boss Peckerwood dead too. Bet they'd be willing to hand over a few boxes of dynamite and some proceeds from the Western Federation of Miner's mutual aid fund to anyone who does him in.

Claude Evo Jr. has been outdoing his pa, no mean feat, in accumulatin' the biggest herd of longhorns this side of the Little Pecos. Everybody knows it's through rustling but who's going to stop the Big Man?

I am up to 18 unique monsters in the Slumbering Ursine Dunes mini-sandbox (now in its fourth editing iteration and about to roll onto to take off), the monster bestiary now starting rival the actual pointcrawl and adventure site write-ups in size. A big fan of new critters to torment and befuddle players this, naturally, makes me supremely happy.

To give readers a sense of the flavor of these write-ups I am posting one of the new additions blog-side, my weirdo twist on the Vodník, a watery “bogey-man” still sometimes used to scare the living poo out of kids today back in the mother land. 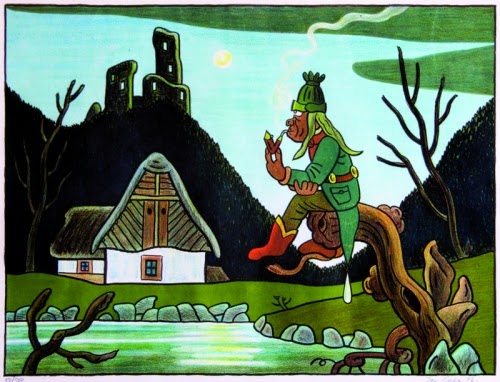 Vodník
No. Enc.: 1-2
Alignment: Chaotic (Evil)
Movement: 120’ (40’)
Armor Class: 4
Hit Dice: 4
Attacks: 1
Damage: 1d6 special (see below)
Save: F4
Morale: 10
Hoard Class: XX
XP: 300
It is said that among the Old Pahr people that a pessimist is someone who thinks that things couldn't be an worse--and that an optimist believes that it can! Pushing aside the old wives tale that a surfeit of strong drink drives men to melancholy, learned men attribute this pervading culture gloom to the surfeit of malovelent spirits and faeries in that people's mythology.

A particularly nasty example of the inimical Pahr spirit is the vodník, a male water nymph of a particularly sour and murderous nature. Vodník often lurk at the edges of lakes and rivers waiting for lone or small groups of village folk

Vodník are invisible in the the water before they strike, but rise as a translucent seeming serpent when they do. Each strike does 1d6 damage but worse is that the spirit serpent will attempt to drag the victim down to a watery doom. Failure to save vs. paralysis will mean that the victim is dragged into the water.

Once the Vodník has a victim under water it will shift into its true form, a pot-bellied old man covered in fine scales, and concentrate on drowning the hapless victim. It will drown a person in 1d6+1 rounds a process that can only be stopped with the creature's death.

The Vodník will only take one hit point of damage from piercing or slashing weapons, but takes full damage as normal. Fire magic will have no effect on the monster. Electrical magic will double in intensity. Casting Purify Food and Water on the creature will kill it outright.

The Vodník will become strangely mellow (read non-murderous) for 1d6 turns after the witching hour, often appearing on rocks or floating on the water smoking a carved pipe. Fishermen as such will often leave offerings of pipe weed to placate local Vodníki.
Posted by Chris Kutalik at 10:03 AM 2 comments