The Misty Isles of the Eld Take Shape 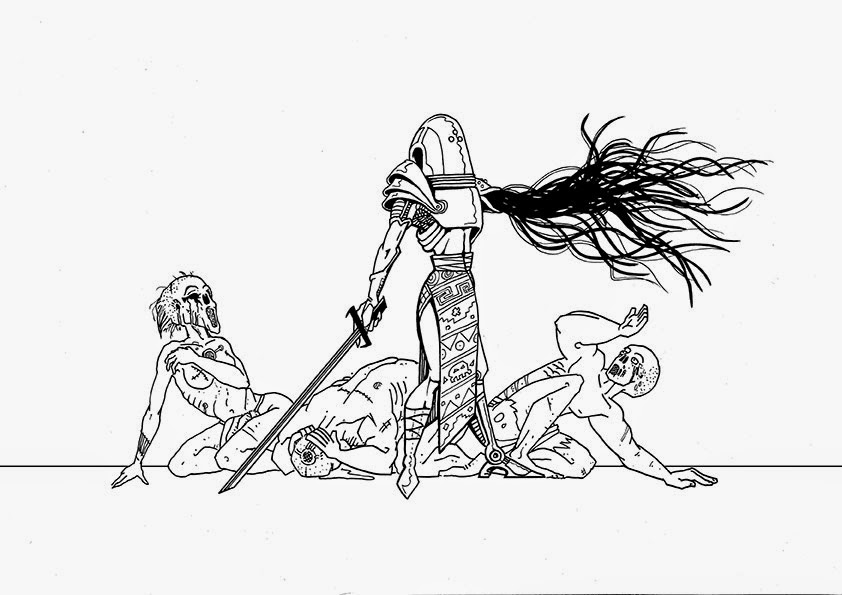 With Fever-Dreaming Marlinko mostly done and in the rewrite phase, I have moved over to the next of the big stretch goal adventures, the Misty Isles of the Eld.

Where as the Dunes was mythic wilderness presented with the elements of an outdoors pointcrawl, the Isles are shaping up to be an extra-planar (in this case the alkaline wastes of the Cold Hell/Anti-Cantons) adventure wrapped up in an 18-point pointcrawl spread over three islands. Pinning it all down are two dungeon sites (the body-horror Vat Complex and the stage-facade Pagoda City) that are larger and weirder then the two tent-pole dungeons of the Dunes.

My writing enthusiasm level has gone from “tired but still feeling it” to “amped up, get out of my way motherf*cka.” What's helped is seeing the art develop on both projects: Jeremy Duncan's inspired grottiness (really a perfect fit for Marlinko) and Luka Rejec's irrepressibly charming and darkly funny work. Seriously on the Hydra team page I will no sooner finish praising a piece only to find another piece posted. And I find myself answering Luka's questions about "do the Isles have such and such?" with “they do now.”

Again with the showing and not telling... 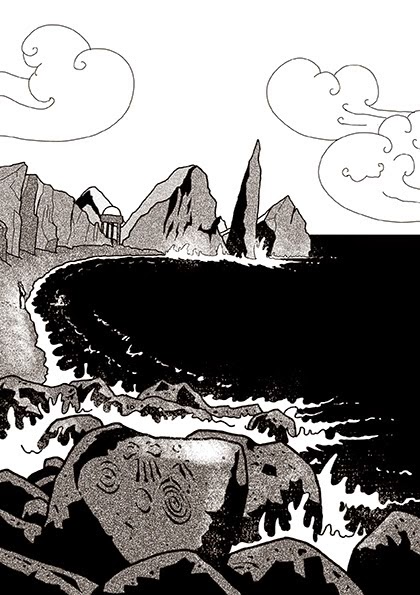 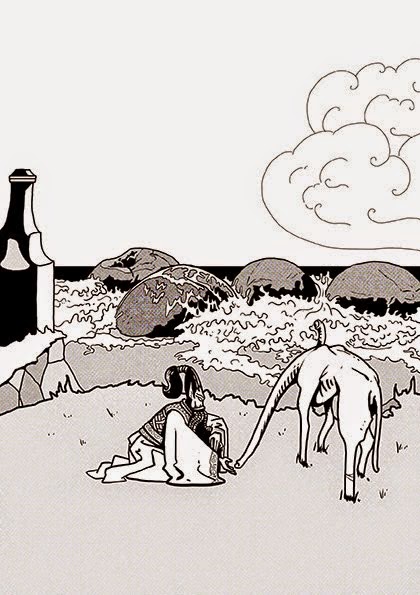 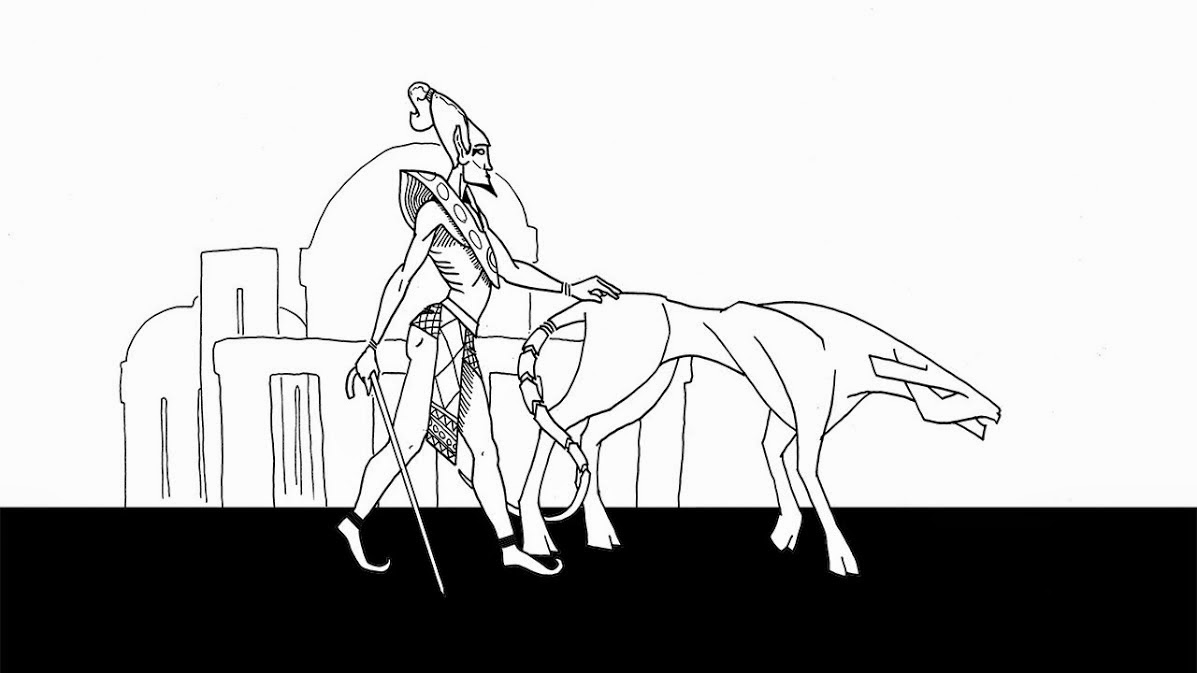 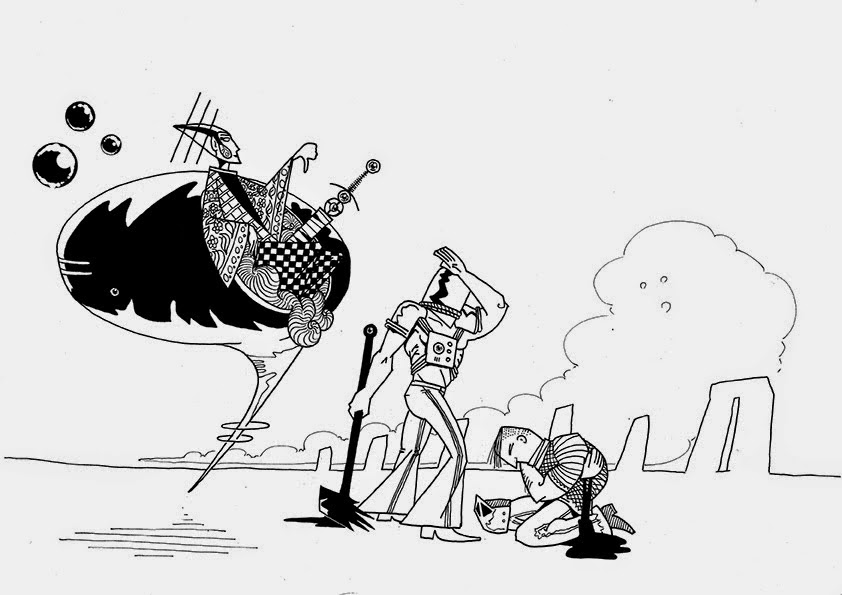 I've been really feeling the wind in my hoary-cliched sails this week.Not only did it feel good to get the Slumbering Ursine Dunes pdf out early to backers last week (and on sale at DriveThru), it felt even better to put the last touches on the draft of the Marlinko city adventure that was the first stretch goal of the Kickstarter. We had originally imagined it to be a smallish thing 20 pages as opposed to the 66 pages of the Dunes but it's already taken on a life of its own and is hitting around 40 digest-sized pages already.

What's invigorating about the writing I am finding is that in a long sandbox campaign you end up with a lot of dead ends or partially-developed material when the party veers off one way or the other. Having the excuse and motivation to really dig down into half-baked, left-behind ideas and places thus feels like a real treat. I never got a chance to really dig into the city adventures and high weirdness of Marlinko after it slipped from its place of prominence as the party's home-base roughly two and change years ago. And now I do.

Anywho here's a sample of some of what the new material is looking like... 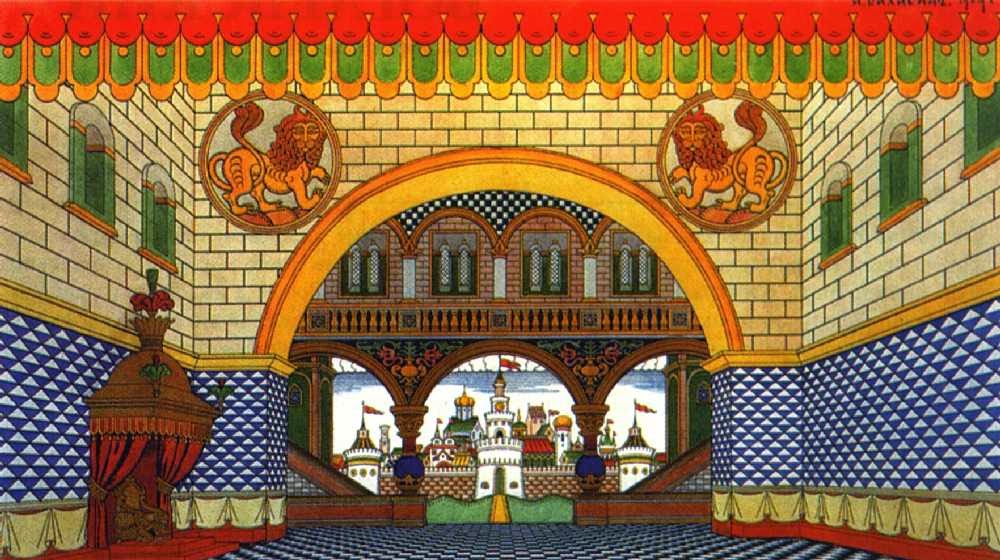 The Four Contradas of Marlinko
Marlinko was built around the squat, black bulk of the Tomb of the Town Gods, a structure that predates the rest of the city by an interminably long period of time. The ominous edifice sitting in its wide, cobblestoned, circular plaza has retained its position as the dead center of the city. Four wide avenues radiate from it at the cardinal points and divide the city into four contradas or quarters.

The four contradas do not reflect merely a geographic or class division but have deeply embedded cultural and psycho-geographical lives of their own. Each contrada organizes its own festivals, keeps its own histories, and pays fearful homage to the abstract-featured idol of its own unique “town god.”

Each contrada also maintains its own contrada hall (a large, well-maintained, ceremonial gathering place) where it keeps a collection of its own unique banners, ceremonial regalia, historical tapestries, mummies, and most importantly, the various trophies it has won in the single most important bi-annual event: the great chariot race that headlines the Ebon Horse Fair. Throughout the year, contrada trainers keep their chosen condemned convict-jockey revved up and ready for the Black Race. It is well that they do for the losers are hanged and the winner takes a trophy and his freedom! 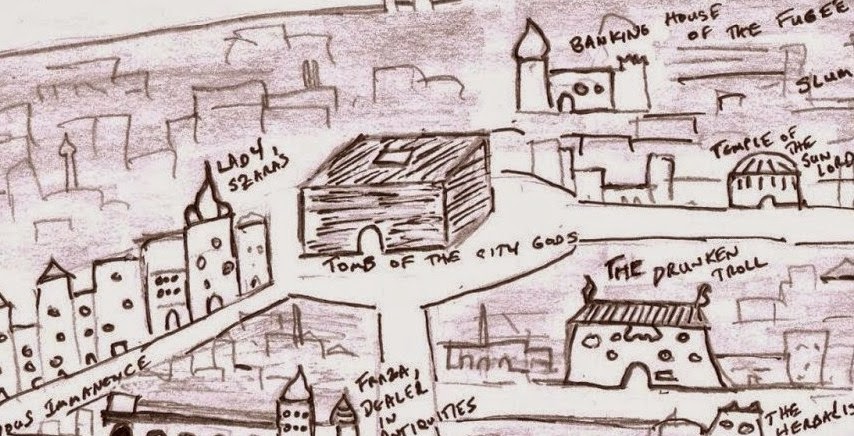 Včelař (Sullen Apiarian) Contrada
The Northwestern Quarter with its great yellow-and-black beehive and mopey deodand emblazoned banner contains the greatest concentration of affluence and easy living in the city. The great painted-plastered town-manses of the wealthy dominate the coveted plaza and avenue fronts in this part of town.

Despite its wealthy cast, the contrada has a deeply-ingrained inferiority complex--due in large part to its century-long losing streak in the Black Race. The loss has become a self-fulfilling prophesy in recent years with the rash of suicides of convicts who consider being drafted into service as a SA jockey to be a death sentence anyway. Roving gangs of youths from respected families are quick to draw rapiers against any slight as to compensate for the wound to their civic honor.

Anfolf
Sullen Apiarian “worships” or placates Anfolf, the vaguely bee-headed town god said to be a rainmaker and bringer of both wealth and anxiety. When Anfolf in his glowing golden nimbus walked the streets of early Marlinko impressing the bearded Pahr immigrants just getting used to lives not spent on horseback, He was said to literally shower them with the sweetest of honey--and the swiftest of kicks...

Though it shouts “conspicuous consumption,” the yellow-limestone and quartz facade of the Sullen Apiarian contrada hall with its amber and lapis lazuli-encrusted honeycombed frescoes stands handsomely over its small, tight square. The contrada society itself is a broad one with a large burgeoning hierarchy of ceremonial officers arrayed in 27 ranks. Incongruously the higher, more labor-intensive (and not un-powerful) positions are held traditionally by the less affluent members of the contrada (or “temporally-embarrassed grandees” as they like to call themselves).

From here each contrada has a key focusing on the interesting and adventurable sites. Each ward description also has their own unique encounter and random building charts—many of which have triggers and hooks embedded in the escalating random event system of the Chaos Index. Encounter charts that have entries like this...
Maus. A wild-eyed  paranoid dressed in the long-robed, woolen hat finery of a rustic boyar. Maus rants and raves at the characters about the “Axis of Tindrthurn,” a secret postal and matchmaking service that he claims is trying to kill him. If the Chaos Level is 6 and over he is correct on all counts. 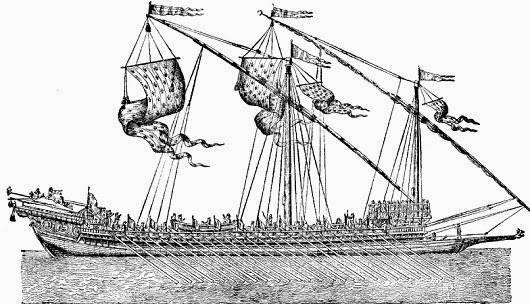