“Vast treeless plains swept away to merge with hazy horizons. In the distance, to the south, a great black cyclopean city reared its spires against an evening sky, and beyond it shone the blue waters of a placid sea. And in the near distance a line of figures moved through the still expanse. They were big men, with yellow hair and cold blue eyes, clad in scale-mail corselets and horned helmets, and they bore shields and swords.”
- Robert E. Howard, Marchers of Valhalla
I will forgive the reader for thinking the prose above is a scene from a lesser known Howard tale set in a Hyboria or Atlantis or other time-forgotten exotic place, strangely its setting is something much closer to home, Texas. Obviously it is neither the Depression-era Texas of his time nor the cartoonish trainwreck Texas that I live in, but an antediluvian mythically-projected Texas.

The deeply odd short story, which was rejected by Weird Tales and first published as late as 1972, is a strange melange of Swords & Sorcery adventure tale and creation myth. Reading it is an uncomfortable experience, the idea of blue-eyed Aryans swooping down to destroy a brown-skinned city of decadents seems too close to the well of bizarre race-based occultist ideas that the Nazis would also be drawing on in this period.

But there is a deep level of mythic resonance to the tale and some compelling fantasy touches, as there is to much of Howard's writing, something that has been explored here before. The semi-famous old school Texan historian (you know the kind that used to write histories as great sweeping narratives) T.R. Feherenbach once wrote that there was a “vast residue of violence leftover from the making of Texas” a theme that heavily inspired Cormac MacCarthy's masterpiece Blood Meridian.

Weirdly reading Marchers this weekend it made me want to game it. Well not “it”, not the actual story itself, but a early medieval fantasy version of this state.

It's an idea I have flirted with before. You can see some throwaway, jokey references in the Tree Maze of the Twisted Druid to the Duke of High Brazos, the Big Thicket and the Free City of Houston. That all reflects a weird transition time circa 1981 for me when my dungeon-focused Holmes campaign was busy morphing into AD&D. I hadn't bought the World of Greyhawk yet (or the Players Handbook for that matter) where the campaign would eventually find its home and was too intimidated about creating my own world whole cloth. What I had instead was a thinly-veiled and vague place set in the cedar-covered hills and plains around my birthplace Austin Texas.

Coming back to this is a deeply broken idea from the get go, but hey bear with me as I try to exorcise this idea-demon to stay focused on the current campaign. 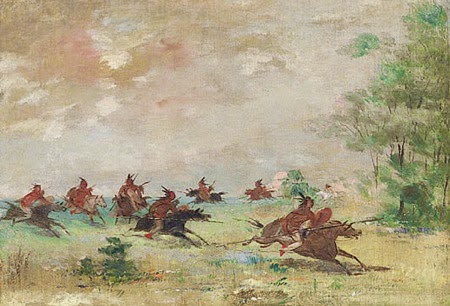 Barbaric Texas
The campaign would open a 1,000 or so years after a less horrific version of the Marchers of Vahalla. Somehow it is a place stuck out of time tens of thousands of years ago but with reflections of today.

The vast big plateau sundered and flooded by Poseidon and Ishtar's wrath at the end of the story has been broken and reborn as the tiered tablelands and hills of Texas's current biomes. I would use an actual bioregion map of the state to fill out a large-scale hex map.

The dark-spired city of Khemu exists as taboo set of ruins mired on flats of one of the long Texas barrier islands (read ruined city pointcrawl). Private in-jokes make me want to put it right where Port Aransas sits today.

The current majority population of the region—those afraid of miscegenation can piss off back to their Stormfront forums--are now mostly the mixed descendants of the blue-eyed raiders from Nordheim and the presumable Native Americans of Khemu. “Purer” descendants of both people exist but are in the minority.

These “Old Texans” live in a patchwork of early medieval-like (read Dark Ages) petty kingdoms with nothing more than rough palisaded towns as seats of power. Longhorn cattle raids, bloody feuds and other border violence are weekly occurrences. It is a violent rough place.

Religion is a bizarre syncretisic mix of Norse, Mesoamerican, DDG Native American and Hyborian deities (so you'd have Snake Man rubbing shoulders with Ymir). I am tempted to throw in a Pecos Bill equivalent and other dumb Texas tall tales but that line perhaps should not be crossed.

The residue of violence has some actual existing supernatural manifestation. Driven mad by it beserker bands roam around and the undead are fueled by sheer hate.

Megafauna from Pleistocene Texas abound. You've got Columbian mastodons, gylptodons (giant proto-armadillos), giant sloths, giant bison, dire wolves, sabre-toothed cats and the like. Hell maybe there is a lost valley of dinosaur critters in Palo Duro canyon out there.

A Comanche equivalent rules the high plains and raids the hell out of the Old Texan settlements. These horse nomads aren't the brutal savages of Texas Anglo myth nor noble savages, just some highly dangerous folks with their own thing going on. Part of me wants to go goofy and say they are the wolf-riding Elves of Elfquest (this whole tone being way, way grimmer than what I enjoy in the Hill Cantons).

Rules? Hmm...Stormbringer first edition or full circle back to an uneasy and ungodly mix of Holmes Basic and AD&D.

Idea-demon exorcized, back to writing about Slumbering Ursine Dunes.
Posted by Chris Kutalik at 11:07 AM 14 comments

Great peacemaker that I am, I have drawn some alternative DIY aesthetic covers for the new D&D Next. Feel free to photocopy them and duct tape them over the hardcover originals if they offend thee. Sadly I ran out of paper and lunch break time before I could finish the new DMG.(Kickstarter?) 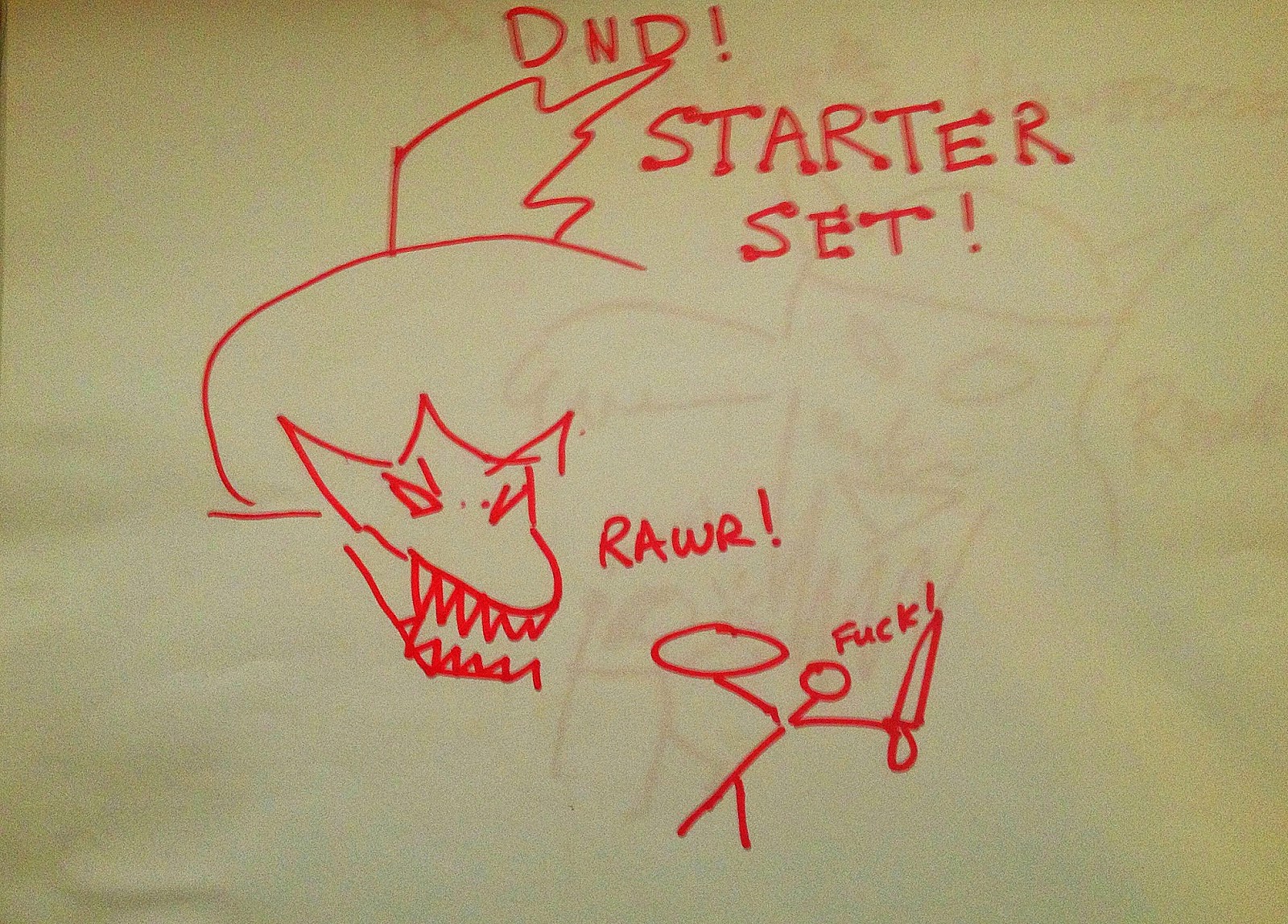 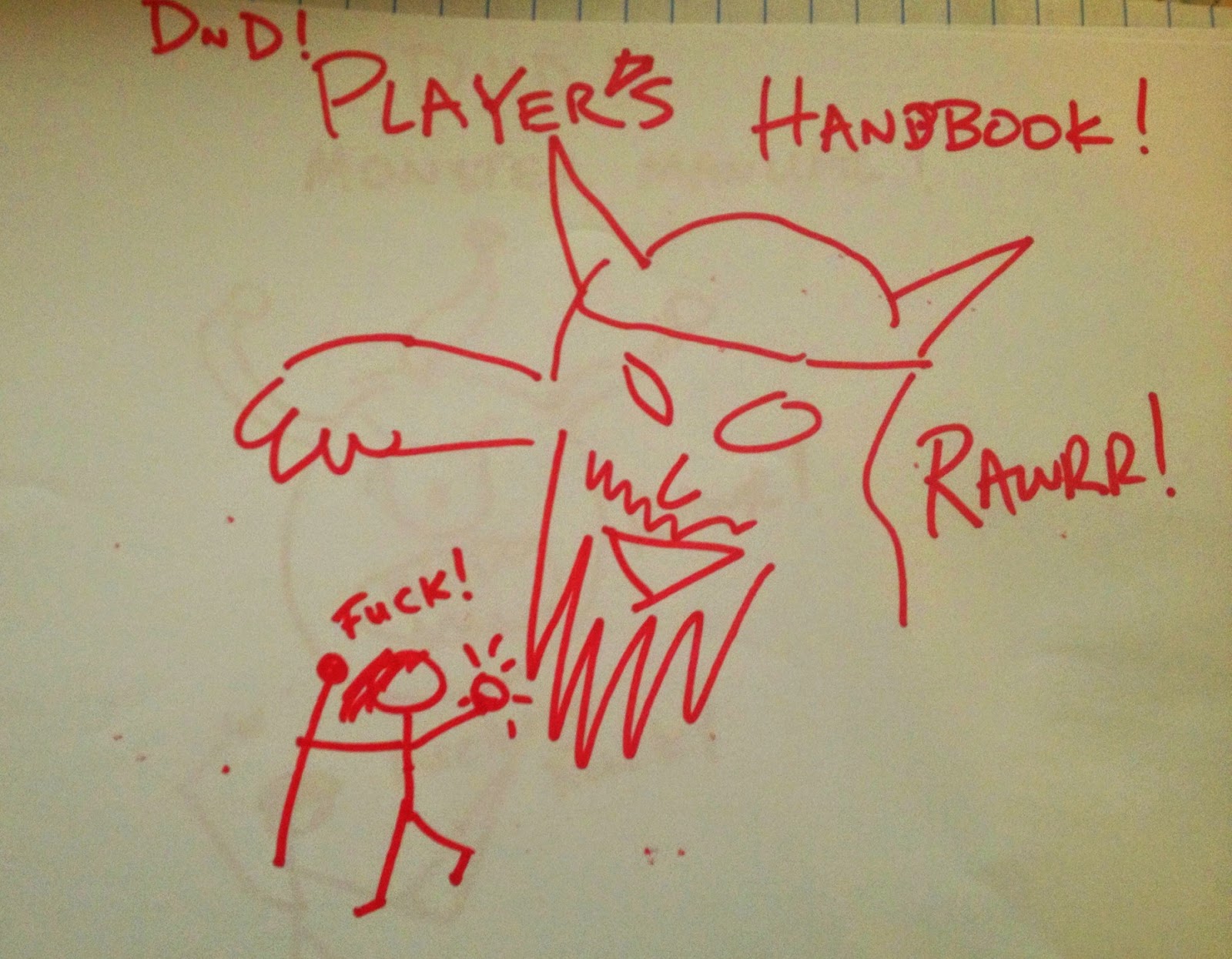 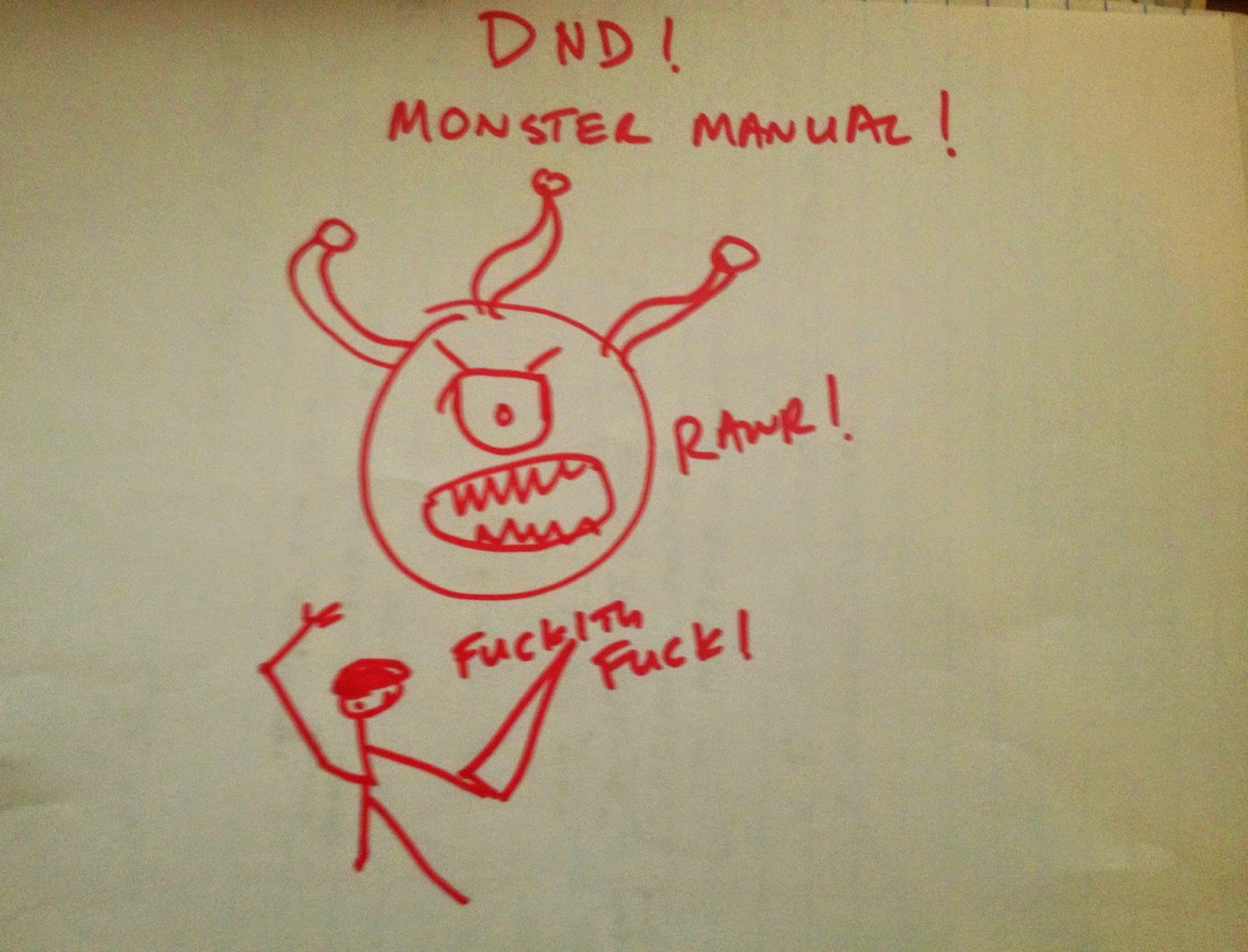 Tree Maze of the Twisted Druid For Free, Yo 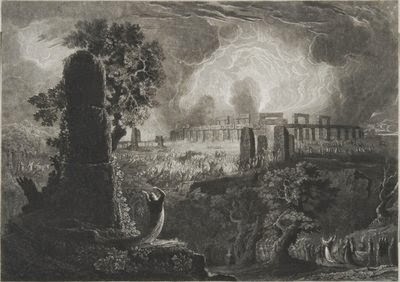 At the end of last week I dumped a major project monkey off my back, by finishing the draft version of my mini-sandbox, the Slumbering Ursine Dunes. It's clocking in around 26 dense letter-sized pages that feature a wilderness pointcrawl, two dungeons, a Chaos Event generator, and a metric crap ton of new monsters, spells and items.

Expect to see a modest little Kickstarter next month to pay for fancy pants art, maps, editing and other costs (only going to do this when I have a near-publishable draft in my sweaty little hands.)

Punchline is I am feeling great, so here's something free for y'all, the infamous Tree Maze of the Twisted Druid. The two sessions playing through it were hella fun (at least on my end) even if the finished product felt more bad-bad and good-good then the intended good-bad, so this is the sound of my shoulders shrugging. You get what you paid for it.

If you do run it (what's wrong with you?), drop me a line, feedback is the best reward. And if you really want to be a mensch and make your mother proud, you can make a $2 suggested donation over here at Autism Speaks.


But if you don't...well...I guess that's cool. It's not like it's chump change compared to what you spend on Steam or that pricey crappacino or whatever. (And why don't you call? We never see you anymore.)
Posted by Chris Kutalik at 11:45 AM 2 comments