Session Three: “Around Town and Back” 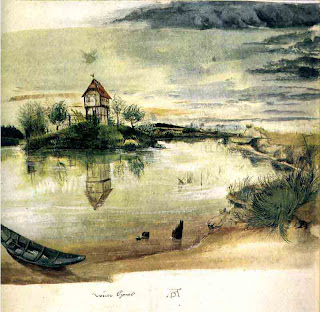 Hightailing it back to Ostrovo, the party finds that actions in the past adventures have triggered events in the present. A sobbing old man near the landsknecht watchtower bemoans a plague of goat-headed humanoids raiding the scattered hillside huts of local shepherds. Vengeful landsknechts also reportedly hung four young villagers in (misplaced) retribution for their fallen comrade. On returning to Ostrovo they also note signs of a recent battle between the town's militia pikemen and the soldiers of the Overking.

The adventurers spend a week selling off some of their small store of loot and finessing various cunning plans. Mattias, convinced that holy water will vanquish the disturbingly unclean fish demons, has a local glassblower manufacture special glass balls to hold the sacred liquid. Meanwhile, August and Sister Anya hunt for local information to help them to take stock in what they face. After an unsuccessful attempt to find the local hedge wizard and a successful attempt (thanks to the influence of the Sister) to find the local women's knitting circle for Celestial Lady worshipers and witches. The two discover that a ominous, cosmic alignment of celestial bodies is causing great consternation in these circles. A large gathering of secret society mages, initiates, and clergy to counter this is expected in the region soon. The two convince Anya's contact to get themselves on the invitation list.

After much bickering back and forth about the relative dangers of a second approach to the Ennsmuth dungeon, the party makes its way back to the village. Skirting the main centers of the now-roused town, they make a wide detour around the ravine and back to the cave mouth.

At first, Mattias' view that they should go straight back to cleaning up the foul unclean lower caves prevails, only to be abandoned after the new thief hears bellowing, stamping sounds at the base of the chute entrance. Under August's insistent urging, they instead decide to lower themselves a further 40 feet down to the floor of the entrance cave.

On the cave floor they encounter a curious sight—the conical roof of a rickety ancient tower protruding from the center. Carefully lowering themselves down to the precarious floor and to the relative safety of the tower's circular staircase they make their way down to the rubble strewn base floor. In the rubble, they find a gold ring on the finger of a skeleton and an obstructed door leading out.

The room beyond the door is even more strange and mysterious. Two large outdoor planters line the sides of the room filled with ash-covered shriveled hedges. Several plaster-cast looking human shapes are curled into fetal positions at their base. And most dramatic of all is the 22-foot wide, 10-foot high double doors on the opposite wall. The doors are carved in intricate patterns with several panels depicting the orbits and trajectories of celestial bodies in the summer and winter skies—and unknown viewpoints. Bands of script in archaic languages and glyphs protecting the structure from the outside world cover the door. All in all a situation which the party treats with great care.

A detect magic spell reveals the door to stink of strong magic and that a magic field keeps the loose soil of the ceiling in place. While remaining safely back in the tower, August casts an open spell on the door. The two giant portals swing open revealing a large, barrel-vaulted chamber inside.

The party cautiously enters to find a large chamber with an carved orange-red wooden floor and a pillared arcade running on both sides. Eight faintly-glowing gold-masked alabaster statues of lithe warriors stamping on fishy/froggy creatures line the walls. Mattias carefully approaches the statues probing with his staff. When his staff to great suspense reaches the gold mask of the statue nearest to him...the scene fades to black and we end the night on a cliff hanger.
Posted by Chris Kutalik at 10:33 PM