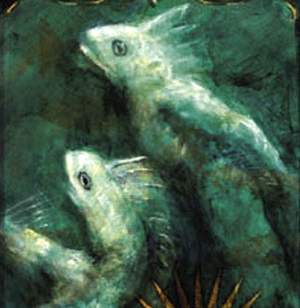 Party additions
August (LN, 2nd level Magic User, played by Joshua). August, a former academic and scholar, has been drawn to the arcane arts as magic walks the land more and more. Apprenticing to one of the handful of known mages in the borderlands, he has had a hint of the mysterious underground circles of practitioners of sorcery—and yearns to learn more.

What happened
Little does the original party know, but they are not alone in their explorations of Ennsmuth's environs. The apprentice mage August and his thieving companion Von Schadenfreude have also been drawn to the town. The two had glimpsed a hideously-proportioned, yet strangely-attractive gold tiara possessed by August's master and deduced its origins in the decaying village. Hungering for gold and knowledge the two have covertly investigated Ennsmuth for two days. Unfortunately they themselves did not go unnoticed. After finding a ladder leading down to a long tunnel under the fishing huts near the ravine, an angry mob of pitchfork and fishing hook-wieldingvillagers purses them. Running at full steam the two—and their pursuers—run head long into the first party now all down the rope on the first ledge.

The heroes make short order of the villagers with mighty sound bursts from the clerics and a sleep spell from August. But victory comes with a price, a lucky jab from a villager (critical hit, she goes to -2 hp) plants a pitchfork into the neck of Sister Anya nearly killing her. Her wounds incapacitate her for days to come.

Following the battle, the adventurers investigate a nearby cave. Though currently empty, the cave floor contains a steep, circular chute at its end. A rock dropped by the barbarians, brings a creature thundering up the chute—and then inexplicably stops before the chute's entrance. Thundarr breaks off a large piece of limestone from the cave wall to drop it down the chute—and then is promptly beaten by the four strong arms of the Barsoomian White Ape lurking just inside. The ape is a strong opponent wounding many of the fighters before being charged by a staff-wielding Mattias who slays him and knocks him down the chute.

Ignoring the dire warnings of August (who claims a vague knowledge of the powerful horrors of the lower levels of the Undercity), the party slides down the 100-foot chute and finds itself in a cave complex. The crumbly limestone of the upper caves gives way to the volcanic basalt of the lower—and a growing foreboding sense of general unwholesomeness the deeper they journey.

Creeping forward into a torch-lit chamber with a long ladder extending upwards, the point-man thief is ambushed by a largish fish-spawned demon from the long-forgotten nightmares of humanity (etc. etc.). The sight of the Deep One instantly makes him fall to his knees in nausea (failed saving throw). The creature proves to be even stronger than the white ape and both barbarians are beaten to an inch of their lives before the foul beast is slain.

The party ventures on and finds more strange caverns including an underground tidal river complete with coracles and secret doors leading into sloping tunnels downward. One particular door emanates a strong foreboding sense. Perhaps unwisely, they kick the door open and see a room filled with a horribly-proportioned statue to a hideous, bulbous elder god wearing a gold tiara. And more urgently the room is also filled with no less than three of the Deep Ones, contently flaying a human on a stone table in the room's center.

More wisely, the heroes choose discretion this time and flee. A flask of burning oil flung by the thief slows but doesn't stop the demons and the party runs all the way back to the bottom of the chute. Hastily stuffing themselves in the chute and inching their way back up it, their untimely deaths are stalled by the simple fact that the Deep Ones hot on their heels can't fit inside.

Fleeing up the rope and out of the cave, they find Bobo loyally guarding their steeds and the inert body of Sister Anya. But the Deep Ones are not the only thing they have to flee, a large mob of villagers led by tiara-clad half-human priests has gathered in Ennsmuth's square. Galloping full tilt out of town the party barely misses being cut off by the lopping horde.
Posted by Chris Kutalik at 10:32 PM