The Proairetic Code and Player-Driven Mystery in the Sandbox 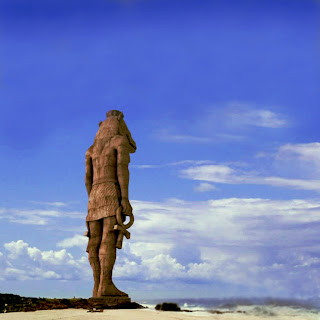 Picking apart the sometimes brilliant, sometimes horrific trainwreck that was Lost, the TV show, never ceases to fascinate me. What gives it an added kick for me is that I always find something that comes back around to how the Hill Cantons campaign evolved from being a straight-up, zero-plot West Marches clone to being the complicated mess of a sandbox bursting at the seems with literally hundreds of outer and inner mysteries.

I am not sure which was the chicken and which was the egg, whether I was drawn to the show after developing elements in the campaign or that the elements came to mirror what I was watching on the boob tube. The origin is not important, it happened.

Accidentally through that evolution I think I may have found something portable to future (and possibly you the reader's) campaigns .
Let me first turn to a wonderful and relevant wrap-up critique of Lost from a fellow San Anto resident on the Ludic blog (well worth checking out here). He wrote:

[Lost] was expert at managing what Roland Barthes identified as the proairetic code — the sequences and actions that propelled the reader into the narrative, and the way those sequences and actions helped impart overall meaning to the text.  The most amazing trick of the proairetic code, one capable of being mastered by something as low as wrestling or as high as Shakespeare, is to involve the reader in the creation of the text; its complexity creates conspiracy, and inspires the viewer to create narratives where none may exist.  This was obvious from the very beginning with Lost, as it provided us with enough narrative hooks and background enigmas that we couldn’t help partake in speculation and theorizing.  Thus did it engender a world even more complex and full of wonder than even the show’s creators were capable of imagining.”

In other words, the show created the (perhaps illusory) sense that the arc of the series was as much driven by the viewer as it was by the writer. The sheer tantalizing density of mystery invited--indeed forced--the viewer to make their own connections and answers. If you substitute player for viewer, and Gamemaster for writer you see the possible applicability to a sandbox.

Let me recap the campaign's evolution to bring me back to point. In the beginning there was just pure site-based evolution. To flavor it up I would throw little weird setting dress moments in the session for ambiance. Here was a sudden lunar eclipse and mysterious over-flight of massive dark-shrouded creatures, there a cryptic oracular reading. It was all a facade really, just something to cover the site-based exploration.

But overtime I found the players getting more and more into trying to piece together those bits. Why did the Hyperboreans build a mountain citadel here and a tomb complex 25 miles over there? Why are the runes we are finding matching what we found on the blue-shining gate on the golden barge? Etc. And as they probed I started developing answers just ahead of them.

As those just-in-time answers became more complicated, I worried about the creeping meta-plot and the inevitable long hand of GM-centered creation. So I tried to develop a whole process involving index cards to keep it flowing organically from the bottom, only creating layers to those mysteries when the players actively sought them (longer, detailed explanation of the process back here and here). The deeper they dug into the more there was there.

This got a little cumbersome, but I stuck with it. Every month or so I would sit down with my notebooks and try and draw connections to all the multiplying bits in bigger arcs. Looking over all that work this morning, I see scores of unexplored question marks (some tied into explored ones, many completely blank other than the trigger) and many more at varying levels with these morass of arrows connecting them to each other.

I think the players (I could be self-deluded and high on my rhetoric) have thrived on this. I love following the post and intra-session discussions on Google Plus by players, it's a reward in itself for me. Hundreds of comments pile up, questions and hypotheses about the what and the why of things they encountered. Sometimes they are shockingly accurate, down to what pulp fantasy literary source I obviously jacked this or that element from. More often they are wildly off, but on occasion their connections and theories are too rich for me to ignore fully—and then low and behold partial or full self-fulfilling prophesy occurs.

That activity I believe has deepened the sandbox experience. It's all good and fun to just have the non-linearally designed dungeons/wilderness sites and the standard adventure hooks--and all the rich emergent story to follows out of play there. I enjoy that in itself too, but I also like having my Big Whopping Something Going on There cake too and--to mix metaphors horribly--having the players also help create it is just icing.

In a funny way it distantly mirrors life. You can coast along fine even having romping fun adventures without probing much into what makes everything tick. But you might also start asking hard question. Why isn't it weird that our lives are dominated by little dirty green slips of paper? What gives that paper that power? (Or whatever.)

The exploration multiples itself and channels your sense of meaning of the larger world. By asking on set of questions one way you find yourself viewing the world in a totally different light (and one possibly radically divergent from a view developed by another exploratory series of questions).

And isn't the best fantasy the dream projection of life with the boring bits cut out?
Posted by Chris Kutalik at 11:21 AM