The Small Wars of Medieval Hack

Writing, designing and playtesting Medieval Hack has taken up an enormous block of my playing time. Though the blog has been neglected I'm not in the least perturbed, playing and building a game from the bottom up has been hella enjoyable.

We had a chance to play twice with a new set of skirmish and small battle rules I developed for the game. Because we want to support players living vicariously as petty warlords we are designing a number of systems that focus on the fortunes and dilemmas of running a smallish warband (among other rather sandbox mechanics).

We needed something versatile that can be played either with or without minis (especially given the large amount of play we do on the ether) and I'm happy to say they seem to work well to date.

Last night saw the first run in Evan's somewhat fantastical Languedoc, with our ruffian band of down and out knights. We have been trying—stupidly given its immense size and sheer lethality—to slay the monstrous fire-breathing bull of Onachus (mother of the equally dreaded Tarrasque).

After a near TPK earlier this week, we got serious—spending an entire winter building a ballista and convincing the Viscount to lend us a small army. Upshot is that with said small army we managed to whip it only losing a handful of men—one of the most satisfying victories of my playing career.

This morning I got a chance to run it with minis, simulating a revenge raid by the Fian Gosse banneret Sir Kavan. Using the recent chaos in the barony as something of a pretext, brash Sir Kavan (pictured in yellow) led his retinue and neighbor Sir Tristan (in the purple and white) into the neighboring barony to steal back “his” prize bull, Terce. Accompanied by Brother Kadfel, his band made its way to Sir Modoc's manorial village to repossess the bull. 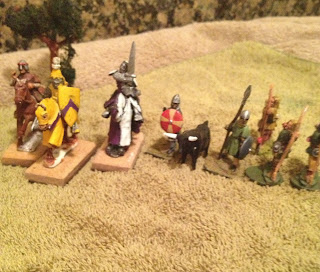 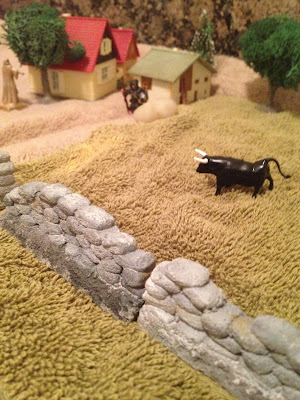 But of course Sir Modoc gave battle, rushing forward with his many mounted sergeants, footmen and hirsute hillmen levy. (Each figure represents a squad of five and a simple system converts attack and defense values from the percentile, BRP-like rpg foundation.) 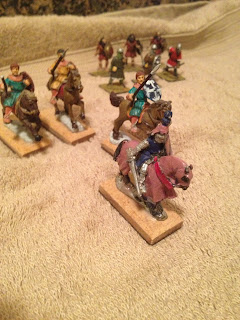 Long story short, Sir Kavan's men met the charge, did very well at first scoring hits and knocking a number of their numerically stronger enemy out of the fight (it takes two hits in the system) in the first three turns. But turn four and five turned south for Sir Kavan's host and both knight squads were knocked out. The attacks caused a cascade of panic through the warband with literally every single one of the survivors losing their nerve and breaking in the following two rounds. 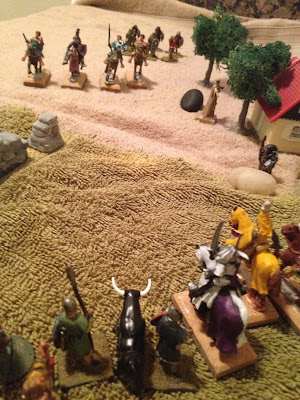 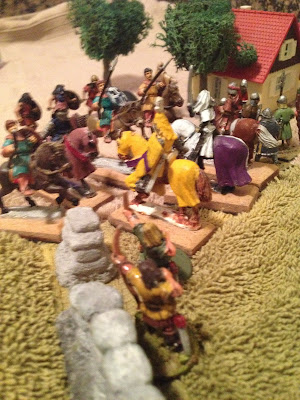 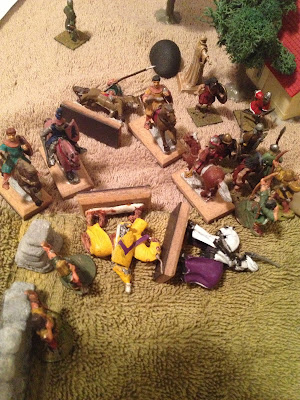 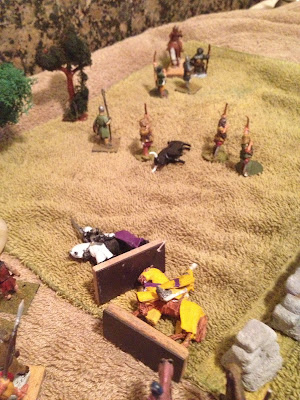 While totally whipped,  the two knights were exceedingly lucky on the Out of the Fight charts for post-battle casualties, rolling high and coming out with only one fatality and a number of serious injuries. Despondently Sir Kavan and Tristan await their fate in the oubliette of the cruel Sir Modoc.

Whether that be torture, ransom, or rescue is yet to be seen...
Posted by Chris Kutalik at 1:00 PM