Just heard from a friend two very fine pieces of news about Flashing Blades (a game I have desperately wanted to play after a half year in an En Garde play-by-post)  from the game's author Mark Pettigrew. 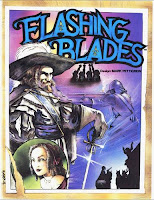 As some may know that game has been in a legal limbo for a very long time. Though its original publisher, FGU, brought the game back into print, much like Villains & Vigilantes the creators had neither received royalties nor control back over their games. That changed last week with Jeff Dee and Jack Herman regaining their rights with this resounding victory.

And now we learn from Pettigrew:
"FGU already agrees that I own the rights to Flashing Blades. I'm even receiving (very small) royalties checks again, after a 20-some year hiatus. I think I mentioned this before, but again, all of you are free to write, publish, etc. whatever you want for FB without worrying about copyright. I'm happy that people are still enjoying the game."

That's a real two-fer: a win for the designer and a refreshing "open source" direction for the game. Perhaps time to move this up on the "games I can run finally" Google-plus queue?
Posted by Chris Kutalik at 6:33 PM