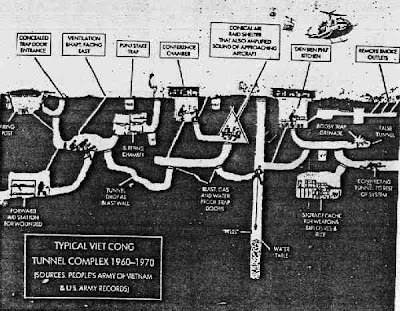 Some of you may remember the above phrase. A couple years back it took on a life of its own in classic D&D circles, hanging around just long enough to spawn a killer dungeon-style adventure and a great deal of vitriol about its ostensible offensiveness.

As used it was supposed to signify the dead-at-any-moment life of old school dungeoneering. The kind of play where you inched along the corridor, 10-foot pole in hand probing every foot of the floor, walls, and ceiling for traps. The kind of play where losing a limb prying open the lid of a chest was as quick as a death by an arrow from your flank. It was the gaming mirror of then still-fresh cultural memory of the stress, paranoia, and grittiness of the Vietnam War.

For me the phrase had a deeper resonance, transporting back 30-something years to my childhood. The war permeated that life. Not the actual war, the US-backed puppet regime had collapsed at the barrel end of North Vietnamese tanks a few years before, but its aftermath.

My father was a Vietnam vet. Not a “I scrubbed B-52s on Guam” or “flew F-16s in the Texas National Guard” kind of vet, but a Purple-Hearted combat veteran of the First Cavalry. I always felt that he hated the war though, what it did to him body and soul--he still carries shrapnel in a shoulder to this day. It haunted him, but he spoke freely of it and even let it enter our play with him.

On long hikes he'd send me or my brother, stick in hand, to walk point--several yards in front so that the sudden blast of an imaginary mine or grenade didn't wipe out the “squad”. Hike done we'd jog back to the car jody-chanting: “I wanna be an Airborne Ranger, living my life full of danger.”

And I played D&D with the man.

Somewhere in the summer of 1981, I ran a few sessions as a DM where he played a first-level mook of a Fighting Man, fittingly called the Tunnel Rat, alongside my brother's bland-by-comparison elf. He played the game with every bit of a rigor that phrase conjures up for latter-day REMFs.

He pored over the equipment tables, grilling me on the properties of this or that item. It took him about five seconds to grasp the killing power of the standard molotov-like flask of oil. He bought 20. Groking the need to travel light and mean he skimped on armor and the excess weapons so common in our summer camp D&D experience. He bought dogs instead.

He pounded through that dungeon with a ruthless efficiency. At first my brother's PC walked point. When that nearly ended with his death at the hands of a goblin ambush, he switched to running his dogs into rooms and closing the door before running in on the attack. When that stopped working, he doused the dogs with oil set them on fire and loosened them into the massed ranks of his opponents (a sardonic nod of my head to him in that tongue-in-the-cheek post).

There wasn't a trap in the place he didn't find, and little in the way of anything hidden missed his eye.

The game was tense, adversarial even. It brought out a side of him that scared me a little. I think sometimes we forget that games—especially such demanding ones as the role-playing variety--aren't always leisurely fun, sometimes they mix passion and a welter of emotions in them. Those sessions certainly did, but I treasure them because they taught me something about the man.

They brought me closer to him through the language of a game I loved—and they taught me how to be one mean mother when I was at the table. Thanks Dad.
Posted by Chris Kutalik at 3:01 PM