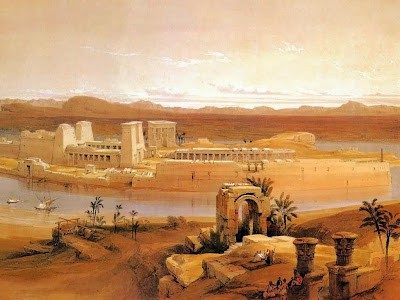 With the Nefarious Nine poised right on the edge of exploring for the first time the big kahuna adventure site of the Feral Shore, the city ruins of the Rusevin, my head is back in the game around how to actually run such a beast.

Longtime readers will remember my attempts to untwist my head around all the cognitive leaps one has to take to do this effectively. The awkward scale problem—city ruins teeter between the micro-exploration of the dungeon and the macro-scale of wilderness crawls—was a major impediment and naturally my mind when back to the pointcrawling model that has been a longstanding theme here.

Taking off from my last installment on that subject (with a bit of restatement to remind both myself and readers where this was going) here is the first part of the system I will be using. A sanitized (and modified just enough to screw with expectations) system for randomly stocking structures, encounters, thematic elements, and other elements will be thrown out in a second part of this series (and maybe a third if it goes overly long).

Point Scale and Types
Each Point Size represents an area of the ruins roughly 100 yards by 100 yard squares. It is the top-level representation of space in the ruins.

Each point, in theory, corresponds to a nestled maps of standard four square/inch graph paper with 10-foot to a square. In reality many Type 1-3 points will lack them altogether or have geomorph stand-ins unless there is a significant adventure site in the point. Some special sites with a high adventure site density will have two nestled maps.

Type 2 (Orange). Completely ruined areas. Surface areas nearly identical to Type 1 above (with occasional free-standing walls), but underground areas (cellars, dungeons and the like) may still be intact if rubble is cleared away.

Type 3 (Yellow). Mostly ruined area. Some may walls exist and structures may be distinct but nearly always lack roofs and upper stories. Underground areas may be existent.

Type 5 (Blue) Barely ruined area. Most structures in the area are intact with minor neglect. Will often be inhabited with recent repairs done by sentient locals. 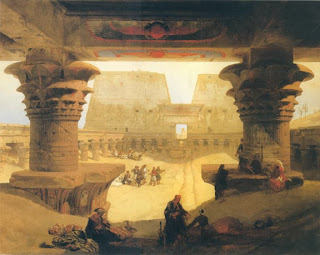 Visibility
With an unblocked line of sight, characters can make out significant details up to 3 point locations and general details (what type of ruin it is, large structures, large-scale movement) up to 10 points away before being obscured.

Clear unruined points and Type 1-2 ruins do not obstruct line of sight. Type 3-5 obstruct it and the line of sight will stop at that square. Large or high structures may block line of sight, but will themselves be readily seen (naturally) at the GM's discretion.

Climbing a roof or other elevated spot will add a point of visibility for each 10 foot floor equivalent climbed.

Example: Gurgi, Master of Tables, is in a Type 1 rubble field point. He can see through two points of the surrounding Type 1 squares (200 yards in each direction) but his line of sight after that is blocked by a ring of Type 4 buildings. The hirsute hireling climbs a ruined 30-foot bulbed tower and from that high point can see past the ring into two-points (or a further 200 yards) of Type 4 and 5 buildings in all directions. 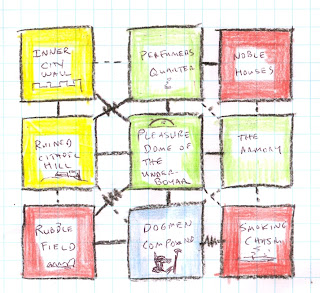 Movement
Movement is assumed to be “exploration speed” (cautious movement watching for critters and structure details with mapping). Normal movement should be at twice speed and running like hell at triple. Wandering monster checks will be at “dungeon” levels (once per turn) in dangerous areas of the ruins and once per three turns in “safer” areas (partially inhabited by non-hostiles or mostly empty Type 1-2).

Dotted Line. Movement is relatively free and often over a field of rubble. One turn to traverse connection.

Single Line. Small streets that may have an occasional obstruction. One turn to traverse.

Broken Line. Movement is difficult, perhaps only through thickly-rubbled and ruined roads. Two turns to traverse.