An Interview with Zzarchov Kowolski

One of my favorite guilty blogging pleasures has been using interviews as an excuse to have conversations with game designers whose work I enjoy. A guilty pleasure I hope to indulge a bit more as I get into the home stretch of the Slumbering Ursine Dunes project.

Today's interview is with Zzarchov Kowolski, one of a handful of gaming folk that share a single walkable community called Canada (or so I am told). On again/off again in various Google Plus games I have run into Zzarchov and found him to be hilarious, anarchic and creative, but it's his adventure design that I admire the most, in the main because he eschews the D&D as a Straight Guy school of thought, never fails to write a memorable adventure site, and doesn't seem afraid to experiment with out-of-the-box forms.

Hill Cantons: How did you get involved with all this? What drove you into game design and publishing? What have you found to be most challenging about DIY design/publishing?

Zzarchov Kowolski: NGR (Neoclassical Geek Revival) was my own collection of house rules to run a game in the vein I wanted to run (a focus on stealth, more gameable priest mechanics, more explicit hitpoint mechanics).  At a certain point, especially when bringing new players on board,  it became easier to just teach it as its own thing.  So I began to work upon streamline and better plugging things in together.

Eventually I figured I may as well make this work available to others in case they could provide any feedback or playtesting. Google+ and Constantcon really kicked that into high gear by letting me run with multiple groups which consisted almost entirely of GM’s in their own right, which is a very unique opportunity.  People like Kyrinn S. Eis, Tim Shorts, and Ian Burns were really helpful during the first release.

From there I just kept putting out more and more things. 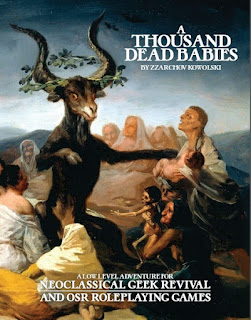 HC: What are some of the important things you learned about honing your craft? Did the lessons come in big leaps or bit by bit?

ZK: Once you’ve run through the gauntlet the first time it gets much much easier for the second release.  As a corollary your first release is going to be pretty bad when you look back at in in five years no matter what.  If it didn’t it would mean you hadn’t learned anything in the last five years.  Also, invest heavily in good layout and try to find someone who is good at it if you don’t have the skill.

The greatest challenge boils down to scheduling.  Things always take longer when you get a bigger and bigger team. DIY publishing is very few people’s day jobs and the work has to navigate around people’s schedules.  The more people who are needed at any given point the more likely that someone will experience a nasty dose of life and will need to slow the project to a halt. Keeping small teams for any individual project and/or a hefty dose of patience is really helpful.

HC: Dear lord, tell me about it. What are some other ways you find to cope or work around that kind of delay chain?

ZK: There are limited things you can do to change delays unless you want to become a taskmaster boss or a demanding client  (which I do not aspire to be during my off periods). Finding a good pool of talented freelancers that you have a good relationship with will do wonders. A pool is key,  life will happen to people and if one person is involved in everything you are doing then when life happens to them everything grinds to a halt for everyone.  That in turn means you might not be able to keep things afloat in the interim, and you’d just end up screwing them over even more by not having anything for them to work on when their life calms down. 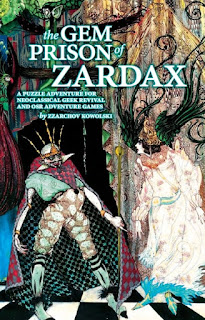 HC: Many of your adventures feature procedural experiment, innovative bits that set them apart from traditional adventure design. Scenic Dunnsmouth had the randomly-changing, ever-replayable map, Under the Waterless Sea (a personal favorite), alongside its fresh, fun Polynesian setting and weird/beautiful pearl-based economy, had a dynamic mechanic for changing the adventure if you switched sides and aided the Deep Ones. Gem-Prison of Zardax (your most recent baby) has an intriguing series of puzzle diagrams. Can you talk some about those experiments. What were you aiming for? How did they work out in writing and most importantly at the table?

ZK: Whenever I write an adventure for publishing I am trying to focus on a specific reason for the adventure to exist on people’s shelves and be used over and over again.  Scenic Dunnsmouth was designed to showcase how you can build replayable adventures for use with the same game group each campaign without getting stale.

I have run Dunnsmouth probably 8 or 10 times, with the same group at least 4 times. I always stick a version of it somewhere in any game I run.  My home game is a post apocalyptic one at the moment, and you can bet Dunnsmouth is there somewhere.  One of the games with my home group didn’t involve the “main adversary” of the adventure.  They burned the town to the ground trying to find out where “they” were.  It was great when I told them after the fact.

Yes, but also in having a number of different “commando” actions (including some that just worked out as wartime looting) that would have an impact.  That makes it easier to fairly adjudicate what happens without letting your own moral compass shade reactions to PC generated chaos. That is all secondary though, as far more importantly to me it was a way to make a “water level” that everyone doesn’t hate.

In another example Thulian Echoes was showing how to replace the dreaded GM infodump for past expeditions. The ability to “play through” the past dungeon delve in the past is a repeatable way to make research into adventurers of your campaign world’s past something more interesting than a sage roll. It also lets you generate some neat consequences to surprise the GM a bit.  Much like Dunnsmouth,  I think there needs to be some interesting gameplay mechanics for the GM.

Similarly, Lamentations of the Gingerbread Princess was an alternate wish system,  The Gem Prison of Zardax is a showcase of how you can have a dungeon spanning set of interlocking puzzles. In addition to its spoiler based goal,  The Pale Lady was also a good test of how much of a song’s lyrics I can get into an adventure without anyone noticing (a lot).  That last one is really more of an author game mechanic. 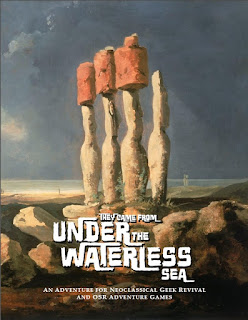 HC: You've also experimented with trying different funding models. With Under the Waterless Sea you attempted to try and use something like the Steam early access model. Tell me about that. Did it work? Would you try it again?

ZK: The “Buystarter” for Under the Waterless Sea worked,  but it was still a tempered success.  On the one hand it no doubt might have exploded larger if I could have allowed a kickstarter process where people could pledge higher than the initial low amount (I had more than a few people asking how they could do this),  but it also had very low risk.  No one was going to be left waiting for 4 years wondering if they would ever get their adventure (I am not immune to the risk of life happening after all).  I might end up doing it again for a small release.

It ironically hasn’t done much better than my ill-advised surprise release for The Gem Prison of Zardax where I posted about it once on April 1st and then just released it later with no additional pre-release announcements.

HC: Word of mouth and the power of reviews—especially by “opinion leaders” (for lack of a better word)--seem hugely important to micropublishers.

ZK: Absolutely, there are a lot of things released and no one has time to read them all.  The opinions of trusted reviewers are a big sway to most people.

HC: What kind of reservations do you have about Kickstarter and crowdfunding in general?

ZK: To follow up on the earlier questions,  life happens.  Delays happen. With your own project, you and you alone as responsible for those delays.  Once you take someone's money,  you now have other stakeholders that you have obligations to.  It doesn’t help that the project can easily spiral beyond your control to manage it.  To pick, pack, and ship 50 books is a lot different than 1,000 books.

HC: So what's next? You have a revision of NGR coming down the pike? Anything else?