Medieval Hack has gone and got itself a new working name, Feudal Anarchy, a title ripped from recent academic debates that have buried the idea of a stable, dullish thing called “feudalism”. (We are lining up with the more gameable strain that emphasizes the chaotic mafia-like view of how things were likely run in the High Middle Ages).

Since those of us working on the game primarily play old school D&D-like campaigns, quite naturally the game has evolved in directions that support campaigns with some of those elements. Emphasis on the “some” since the design frame of the game has some departure points–fewer and more mythical powerful monsters, more limited site-based exploration, a greater emphasis on the PCs role and station in society etc.--from that style of play.

Which naturally leads us to be thinking a lot more intentionally about how we can get the high-player agency, dangerous, non-linear “sandboxy” elements while keeping the game's more focused flavor. And that means trying to wrap our heads around different kinds of campaigns for Feudal Anarchy--and how to support them in the rules.

Some examples:
Local Sandbox. The players are mostly assumed to have their adventures in a small, bounded sandbox say a barony, county, or other region generally walkable in a few days or a single week. The campaign dynamics revolve around a mix of news hooks, site-based exploration, and to a greater degree than some other fantasy games a web of personal relationships. This kind of sandbox thrives on small details and is thus generally smaller and more bounded geographically than most fantasy game campaigns. (To date both Ulfland and Evan's Cocanha playtest campaigns are examples of this kind of campaign).

The random fief/realm generator can spit out counties, earldoms, manors, towns, monasteries, megalith, weathered ruins, etc to help speed or guide the creation process. We have also developed a subsystem to quickly generate the broad brushstrokes of a big cast of NPCs--and their broader relationship web (who hates who, whose plotting against what, etc). We still need a system to generate period-appropriate events en masse. 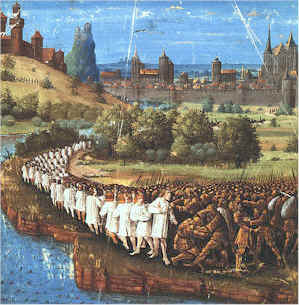 The Roadshow. This is a sandbox mode where the players are wandering Europe. The game hardwires certain non-linear incentives (primarily in the Magic chapter) to getting to other places: gaining new knowledge of the “magical” powers of different saints at pilgrimage sites, shrines, cathedrals, etc; finding new demons and black magical knowledge; and hunting rare herbs and alchemical components. The characters are mostly footloose for various period-appropriate reasons (perhaps they are on pilgrimage, fleeing serfdom, or on a long circuitous trip to a distant city) with various adventures along the way. 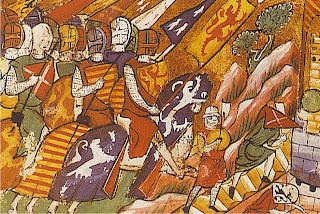 Warband. Somewhat similar to above in that it assumes a high degree of roving (can in fact be combined like all these modes). In this case the PCs lead (or are part of larger NPC force) a free company, bandit band, or other warband. A more combat oriented game with copious usage of the mass battle, siege and other rules. We are developing a special set of rules to handle small battle combats without miniatures (and are more interactive and less abstract than the mass battle rules). Also special rules for resource management and retinues in general. 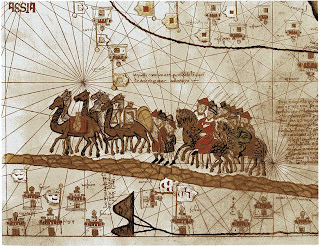 Marco Polo. More trading (perhaps with some exploration) focused campaign that combines elements of above. The players could have a home town/port that they have local adventures on but play is mostly focused on turning profits on a grand circuit. Simple long distance and commodity trade system and a mishaps table combined with some of the warband and roadshow mechanics will support this. 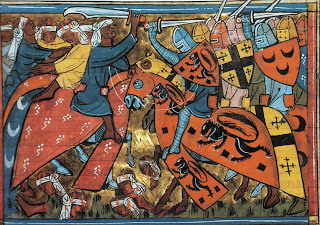 Off to the Crusade. Traveling to the Crusades in the Levant was a long, arduous journey often filled with much turmoil and chaos—i.e. great gaming material. Both the land route through Central Europe, the Balkans, Byzantine Empire, etc. and the sea route through the hotly contested Mediterranean (with ports of call along the way) present enormous adventuring opportunities.

This type of campaign could essentially be a mix of both the Road Show and Warband with the possibility of a final climatic phase using the Abstract Mass Battle Rules we have currently for the game. Deus Vult.

Of course like all categorizations of things that tend to be messy and evolve on their own (human that is) the different sandboxes here can overlap, vary in specific character or even be phases in a campaign's evolution as players' goals/desires change.

Thoughts, oh peanut gallery? Any suggestions for different categories or supporting mechanics? Things you'd like to see or just plain don't like in there?
Posted by Chris Kutalik at 11:29 AM