Galactic Anarchy and other Traveller Whoha 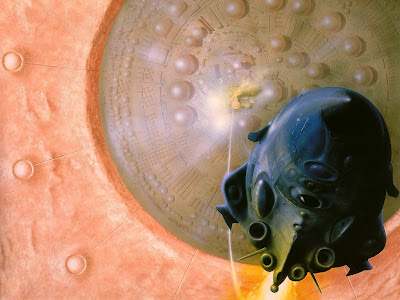 The first session of the Classic Traveller mini-campaign (the admittedly clumsily-titled Coup Box) kicked off last week and I had a splendid time keeping up with the machinations of the players. An hour into the session they were already scheming to double-cross their patrons and install a pro-Dogoid (really Vargr is such a loaded racist term) rights regime after their coup.

In my usual fit of over-doing it I added a few more elements to liven it up. The first was recruiting old homegroup standby, Mack of Super Galactic Dreadnought, to play the part of Admiral Mahkson, a former Cantonment Navy ensign turned Minister of Internal Affairs of the Kral (the coup target). Over three matches of X-Wing Saturday, he has already injected a few devious notes into the mix.

Knowing that some large-scale battles were coming down the pike, I spent sometime this weekend marrying Deep Evan and I's much-tested pen-and-paper skirmish rules for Feudal Anarchy with some elements of that old Traveller minis warhorse Striker. If you'd like to see the draft version (and promise to give me some feedback) drop me a line.

But now the news.

Tonight on Raving Foxoid Holostem News...
Monglocorp has wrapped up its aggressive acquisition of the intellectual rights of Logsoph and now holds exclusive rights to the concept of Ontology. In newly-issued generous licensing terms, personages uttering or expressing an inquiry into the nature of Being are now obliged to post or state a trademarked statement and to pay a modest 10CR royalty to the conglom.

Two-Hour War hero Colonel Zog has been abducted by “men foul and rough” from his tower-flat according to his beloved niece Kocka. Missing since yesterday, the Novo Marlank police have promised a “full and thorough investigation into the matter just after they clear off the current caseload.”

The civil war on Freedonia continues to have everything change and stay the same. Three firefights this week “timed out” when the 20-percent casualty caps were reached leaving front lines much the same. In this ever-fracturing war a fifth grouplet, the Polar Autonome Commonwealth, a minority, northen-based splinter from the radical decentralist Microbalkanizers, has thrown its own factional hat into the ring.


In other news on the moon, in a holo-press release from the Kral state new service, the government of that isolated city-state has declared that the southern town of Zumhaa has been renamed to Autokratorstad in order to best honor the “30th jubilee-year of our most beloved Maximum Leader's reign.” Hysterical tears of joy were expressed around the ceremonial bark-tea and mollusk-cookies tables by the rounded-up crowd.
Posted by Chris Kutalik at 9:16 AM