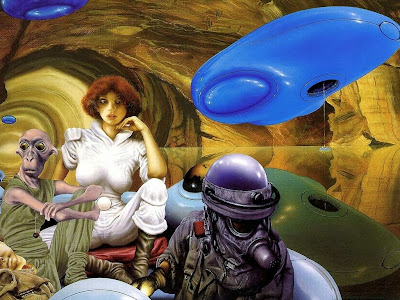 The Cantonment Army
Since the Great Mutiny of the Upheaval, the Army stubbornly remains one of the most socially egalitarian of the interstellar bodies. At the start of each four-year term (staggered in four annual cohorts) raucous barrack-caucuses politick and polemicize around officer and NCO elections. Even with the furious electioneering—and the one-year universal conscription of middle school students (the source of our widespread 0-level familiarity with Gun Combat and Vacc Suits, I remind you traveller) that reduces even the crustiest of Army DIs to tears of frustration—morale, discipline and espirit d'corps is consistently high all the same--perhaps due to the deeply-engrained regimental tradition that honors those bodies as much as ancestral personages.

The Cantonment Navy
While the Army is in the hands of the egals, the Navy remains solidly ancien regime. The sons and daughters of the old titled aristocracy graduate from lazy teen days of running space yachts to that of running 20,000-ton space-dromons with all the ease of blue blood. Though by law rankers are allowed to take commissions, they find it difficult to climb without the right string of titles. Which is, of course, the proper way of things, what, what.

The Scout Service
Formerly known as the Department of Anomalous Removal, or more colloquially the Blackstars, the branch has been charged for centuries with the mission of exploring the many ACOs (artifacts, planetoids, alien ships, etc) that floated through the barrier of the pocket universe—and promptly blowing them with up. Since the Cantonment's popping back into the known galaxy a scant decade ago, the service has slowly broadened its mission (mostly) embracing the idea that other worlds are actually worth visiting.


The Astro-Marines
A department of the High-Ministry of Infrastructure and Orgone Accumulation, the Astro-Marines maintain a fearsome reputation as an elite fighting force. State hospitals, journalism colleges and penal colonies provide a major pipeline of psychotics to keep the Marines in fighting trim.

Bolos
While the Cantonment is no stranger to military pronunciamentos, moral panics, sports riots and the like the greatest, most-lasting and paradoxically least-bloody insurrection of the Pocket Universe Period was the Autonome Upheaval and Admantine Compromise of 80-90 years ago. Part of that legacy is the survival of the many varied worker-owned/run coops, communes, gigantic tank-rental agencies, etc. styled bolos.

Though traditional bolos (internally anarcho-communistic intentional communities that get by almost entirely on the gift-economy) are rarely found off the three semi-autonomous worlds of bolo-space, cooperatively-run outfits still operate everything from plastisteel foundries to mercenary companies to Weirdspace exploration.


Joint-stock companies are antique relics mostly involved with marginal industries such as marketing and potting soil manufacture, but congloms, the sprawling family-owned semi-feudal companies with impossible names, abound. A bastion of the lower gentry and upper managerial caste, the congloms have catapulted the financial and political power of that class (often above that of their titled betters)
Posted by Chris Kutalik at 11:29 AM