The hatches have been battened, the sails trimmed. The vorpal blade has gone snickety-snack and the metaphors mixed. The Hill Cantons and I are full speed ahead--with a blessed minimum of adult real life responsibilities--to the Dallas Metroplex for the North Texas RPG Con this year.

I lump the HC in there, not as final confirmation of creeping disassociative mental illness (I hide it too well), but as an announcement: I will be running a Hill Cantons game on Saturday morning (9 am to a theoretical 2 pm) at the Con.

The game will be set in one of the longest standing White Whales of the campaign, the biomechanical golden barge of the Eld that formerly was beached on the Slumbering Ursine Dunes--and will be again as we back up in time. I will be running it with pregens (though you are welcome to bring your own 2-3rd level character if you can stand some vetting) and the same Laby Lord/AEC that I run at the table.

It's (mostly) nice to put the virtual names to the real faces in the conviviality of the gaming table, so it'd be right nice to meet any of you. (I have eight slots maximum and with registration not opened yet only three unofficially reserved at this moment.) 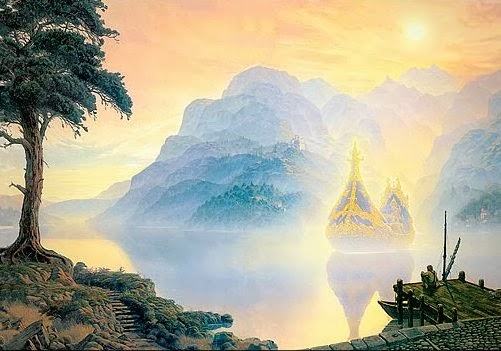 This world news finished off to news from the real Hill Cantons world...
The term “bonder” may become a thing of the past. In a wallposter declaration Goatday, the Decade King declared that all mercenaries manning Kezmarok's walls serving 20-year debt-bonds are absolved in exchange for citizenship and a reduced two-year term of service. The proclamation was greeted with wild abandon in the Little Cantons quarter. No hobbits were hurt.

A provocative new pamphlet is rocking the excitable (and riot-prone) academic world of the Cantons. A Brief Relation of the World-Dungeon Unitary, As it Was Delivered to the Thinking Folk of Marlank theorizes that mirroring the surface of the world is a vast subterranean network of dank chambers, byzantine tunnels, tomb complexes, fiendish traps, treasure houses, and creatures fell.

That said “dungeons” combining those elements exist is a matter of consensus among scholars, but this new doctrine of pandungeonism that claims that all said murderholes are but the surface manifestations of a single world-dungeon has already drawn the ire of the ecumenical council of the Temple who have deemed it and its anonymous author, The Son of Mulmak, “borderline heretical.”

The shock waves caused by the freakish disappearance of half of Kezmarok has started to hit the Cantons, Marlank which owes its fragile prosperity and survivability deep in the southern Weird to its trade position with the half-ruined metropolis has been hit hard in the last month. Indeed some of the better bred citizens are feeling the pinch and there are rumors that some of the most wealthy of families have been forced to sell their swanky Tomb-Plaza facing townhouses to the deeper pocketed fixture of the city's nightlife, Lady Szara.

Arriving on the docks of Karldeset on the Feral Shore as immigrants:


Zim Byi, an immaculately-coiffured “first-level specialist” with a self-evidently fake Scarlet Sultanate name and pronounced northern drawl. He is accompanied by two thuggish “business associates” and a chained coffle of what he calls “temporarily embarrassed millionaires.” He offers to sell said sad folk's indentured contracts to the colony for a fixed price of 500 suns (3.4 years remaining on all for 21 hands “I will throw the children in for free” he says with an oily sneer)
Posted by Chris Kutalik at 9:25 AM