Deep in my ancestral motherland exists a roleplaying game, DračíDoupě (DrD or Dragon's Lair), that contains some loveablely weird critters that cries out for homage and adaption to the kolach-loving peoples of the Cantons.
Kudůk
No. Enc.: 3d6 (5d8)
Alignment: Neutral
Movement: 90’ (30’)
Armor Class: 6
Hit Dice: 1
Attacks: 1 (weapon or hurling rock)
Damage: 1d4+1 (rock) or weapon
Save: H1
Morale: 9

The wee peoples of Zěm suffer daily humiliations at the hands of a callous (yet fair) humanity. Banned from the corelands of civilization, they are forced to the margins of borderlands life living on at best in urban environs as the butt of the southlands hobbit-wrangling sport-circuit. Rurally a greater, if desperately poor separate existence has been carved out by Overking writ in the shtetls (ghettoized villages) in the frigid Marches of Nur. 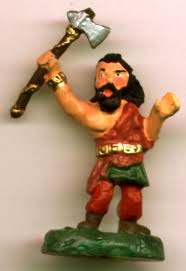 There stirred on by undoubtedly by the silver-tongued lies of Black Hobbit agitators—and the occasional pogrom by bigoted Soldier-Bears--some younger buck halflings will occasion escape into the wilds of the Weird. Not quite hardy enough yet to make it in “maroon” communities of their own, these halflings will seek out the cave shelters of Feral Dwarfs. Several centuries of such intermixings has produced a now-increasingly hardy (and socially-constructed) race of dwarf-hobbit love-children, the Kudůki.


The average Kudůk combines many of the physical features of both parents, appearing alternately to outsiders as either short-bearded, linebacker-built hobbits of exceptionally dour countenance or as rosy-cheeked cherubic Harpo-esque dwarfs.

Though most Kudůki will be found dressed in fierce-looking leathers and furs (though tastefully cut), recent drives by Kudůk nationalists have produced a unique fashion-trend introducing over-sized, triple-horned bronze helmets, thick metallic belts and light cloth chitons or tunics to the usual mix of clothing.

Internally the Kudůk mind is often one of extreme identity confusion bouncing around from a bi-polar cycling of luxury-loving complacency and temperate gluttony to a sudden obsession with the process and fruits of mining. Kudůk lairs as such will often resemble an underground jumble of crude leather pillow-stuffed salons and country-styled kitchenettes next to wholly industrial areas such as ore smelters and mine shafts.

Because of their marginal status and semi-outlaw status, quarterlings will often look on outsiders from a purely predator viewpoint: at best as valuable trade sources to cheat around the edges (placing a chubby little thumb on the scales here and there to jack up a price) or at worst severely drubbing and robbing if they outnumber/power a party by large numbers (drawing the slippery ethical line at cold-blooded murder).

Kudůk enjoy the somewhat diminished abilities and drawbacks of both groups of wee folk: 30' infravision, hiding outdoors or in natural caves at 45%, +1 to initiative if in all Kudůk party, +1 to hit when throwing rocks, and a 1 in 6 chance of detecting construction-based traps (but a 1-2 chance for secret doors). They may not use two-handed weapons.

When encountered of groups of 18 or more they will be accompanied by a 4 hit dice leader who has a 40% chance of being batshit insane.
Posted by Chris Kutalik at 3:09 PM