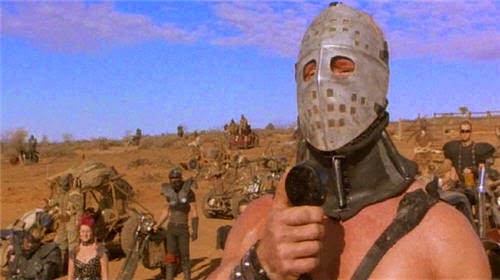 In the distant future of 2004 the administration of the court-appointed and deeply unpopular President Shrub found itself in dire political straits (collapse of the financial sector, three quagmired wars in the Middle East, the infamous Peckerwood scandal). Wingnuts funded by the billionaire Cocke brothers make good on Operation Patriot, a series of organized destabilizations made to scare the country 'straight.' In the resulting chaos, most major cities and strategic sites are destroyed by dirty bombs, suitcase nukes, biochemical/mutagen agents, bank over-draft surcharges and suburban rioters demanding a return to convenience.

Then some even crazier shit happened for decades. And now Road Warrior.

Get thee behind me Satan.

There is a small mountain of writing to do for Slumbering Ursine Dunes and I am going to buckle down and finish (dammit) before I whip out that credit card. To get some of that Post-Apocalyptic gaming out of my system instead I am going to post about a start on a game that I wrote up a couple months ago to get me out from the evil spell of Fallout New Vegas.

Titled not-at-all-facetiously Anarchy--or alternately and less immaturely Fucking Anarchy and Shit. The outline of the game is a straight-up mod of Feudal Anarchy, the hardcore medievalist d100-like game that we expect the Hydra Collective to take up and finally produce in full technicolor glory after the Dunes project.

Tone-wise I imagine it laying at some impossible point between Fallout, Road Warrior, Car Wars and Kung Fu 2100. It's pitched at being tad less gritty (and fiddly) than say Aftermath or Twilight 2000 but less goofy and fantastic than Gamma World. So you know guns, karate chops, car chases and scrambling for duct tape and rusted cans of cat food in a cannibal-infested bunker.

Like Feudal Anarchy, I started outlining a heavy emphasis on a player character's background and vocations. Traveller has always been my second game and it showed in the writing of FA. There was a heap of charts guiding you from your birth station, class, and of course zig-zagging pre-adventurer careers—all of which modify your attributes, starting skills and gear.

Oh hell, I will stop jawing about it. You can download the ultra-rough draft here and see for yourself.

It's just enough (barely) to run a couple playtest sessions. When things chill out in the next month or so I will likely run a test-balloon session (or the Traveller Coupbox II depending on mood). I've decided on a sandbox area in an area I have spent a lot of time tramping up and down, the desert and mountains around Guadalupe and Carlsbad Caverns national parks. Lots of adventure in there I reckon and plus I can reskin/recycle much of my Boot Hill material.

Naturally it needs--and will get later this year or early next--a good deal of expansion. More vocations, more guns, more junk of the Pre-War to go gaga over. I'm also looking forward to knocking out some simple vehicle chase and combat rules and a few surprises.

But first the Dunes.
Posted by Chris Kutalik at 12:00 PM