A Quick Tour of Marlinko Canton 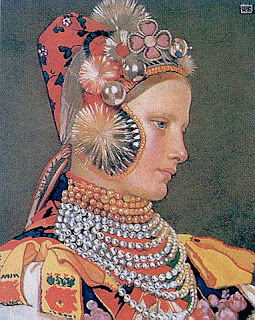 Despite being the geographically largest of the Hill Cantons, Marlinko Canton (affectionately known as “Bloody” or “Sun-Damned, Fucking Marlinko” by its neighbors) is far and away the least densely populated. Much of its cedar-covered, ferrous red-soiled hillscape lies wholly inside the Weird and its not uncommon to feel the sudden, palpable electric shockwall and instant cessation of bird song that marks entering the mythical wilds several times strolling along a country back road.

As such human settlement clusters tightly and nervously together in the Ostrod river basin. A fertile region with its rich soils bi-annually renewed by the super-nutrients of the Blood Rains brought on by Habeka the Celestial Lady's whipping of our dear Sun Lord with her silver chains. 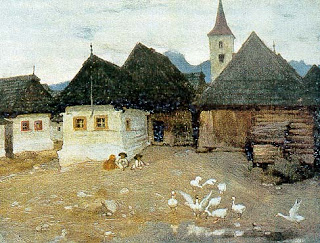 But don't be fooled by the bucolic whitewashed and blackwood-sided villages with their smiling floral-embroidered-tuniced peasants and bluff  red-faced rural boyars, their superficial rural easiness masks a life as strange and dream-cast as their big city capital, Marlinko.

Indeed each village tries to out do the next in having numerically more and vastly more eccentric mini-contradas competitively aping the demigod-centered, ancient traditions of their urban neighbor--some tiny hamlets sporting as many as 6-7 even!

Who cannot marvel at an entire so-called “contrada” being made up of two rundown cottages and a barn dedicated to an entirely-fictitious godling called She Who Mothers a Donkey?

The tidy blood-apricot orchards and wide barley fields...but Hot Hell, I come not to bore you with such mundanities, let's get to the hexcrawl.
02.13-03.13 The Misty Isles. Deep never-lifting fog covers these isles said by many to be a pastoral paradise where cheese and apricot pastry-trees grow along gentle banks of plum-brandy rivers and rock-candy boulders. This is, of course, some bullshit, upended by the cold, hard pocket universe reality of the upcoming Misty Isles of the Eld.

03.05 Lumaš.  A tall free-standing bone-tower monument rises here in memory to the sweetest of joys: organized slaughter of co-religionists on the field of battle. A massive granite slab sits on rollers below the tower cutting off the chill tomb-warren haunts below.

14.08 The Frog Demon Temple. A wide bowl in the surrounding rocky, cedar-sprinkled hills holds a fetid bog. A low causeway runs over the swamp toward a cypress-ringed mound. Beware the Batrachian Prince that Gnaws at the Soul of the World Turtle, bewarrrre. [This death-trap dungeon which my G+ group was (rightly) terrified of and refused to step into for almost three years (after losing a hireling to a stair trap in the first minute) is one of the star attractions in the upcoming What Ho, Frog Demons.] 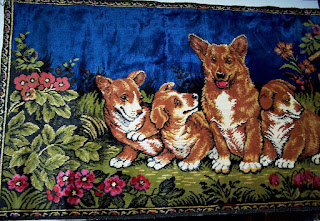 The Inflexible Highway. An old Hyperborean stone highway stretches just over the ridge from Marlinko precisely north and south. Stubbornly its engineers refused to route it around ridges or cut notches to reduce the gradient and can be a grind to walk even with its magnificently un-shitty pavement.

16.00 Ancient Mountain Hall of the Hyperboreans. High on a flattened mountain top lies the campiest of Hyperborean faux-barbarian ruins-camp: an over-wrought meadhall raised in cold grey slate and supported by gleaming cyclopean pillars. Beneath it lies...well, a dungeon (seven whole levels to be precise).

17.07 Marlinko. Marlinko (or Marlank if you using the Nemec exonym) is a bustling, smallish, and deeply odd city of 7,000 and the council seat of the Marlinko Canton. Life there as such takes on a strange dream-logic cast even by the standards of the rest of the borderlands. It's all in Fever-Dreaming Marlinko, why are you even reading this?

17.12 Ctyri Ctvrt. A pleasant market town and port of white-washed and black-trimmed buildings saddled with a tongue-twisted name that opaquely translates to "The Quartered Fourth." A local boyar has unearthed a 500-stone beet from his tenant farmer's field in the hamlet. Most strange of all is the twisted face-like blemish near the giant beet's crown. A local shepherd claims to have heard a booming voice emanate from the storage hut where it is currently housed.

18.02 Here Be Deodands. Not terribly far from the best, most obvious and most comfortable place for unlikely travellers to camp is a series of small caves in the bank of a short creek. Living in tidy, glittering sequin-walled caves is a lair of 20-200 deodands (100% “in liar”). A wise traveler refuses their late night entreaties to “cut a sweet real estate deal with them.”

19.09 Stary Maso. This oddly-named village (“Old Meat” in the local Pahr dialect) has a remarkable tolerance for adventurers, especially given several incidents in which said itinerant ruffians sired illegitimate new local residents—and a rather inglorious and infamous incident in which the local peasantry were collectively tricked into believing into a cargo cult centered around a Golden Barge by an obese, pig-masked mountebank. Indeed the precociously-glib toddler-bastard “Lil Colonel” is a much beloved village center of attention at barnyard line dances.

21.08 Bad Rajetz. Inbred eastern hinterland town renowned for its leather goods (especially its fetishwear). Infested with diabolists, demon-lovers, crowdfunders and Old Pahr heretics. Vast caverns with great, swooping bats and fire-breathing lizards lurking in the shadowy depths are said to feed into a vast, sprawling and most improbable Undervillage. Beware of your sister-cousins.
Posted by Chris Kutalik at 2:02 PM