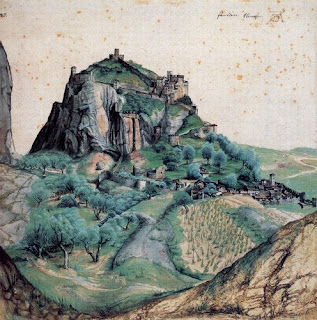 The campaign is set in a frontier region of the Over-Kingdom of the Nemetz Lands, a sprawling, loose federation of vaguely Germanic and Slavic domains ruled by an Overking elected by the Lords Temporal and Spiritual. Our down-and-out heroes have just ridden into Ostrovo, a small, provincial town of around 3,000, located in the Hill Cantons, a wild and woolly borderlands region of independent-minded freeholders and petty aristocratic micro-states.

As the curtain lifts, the Over-Kingdom teeters on the brink of chaos. It is a land so very different from our own. Two long grueling overseas wars against distant sultanates, the collapse of the large merchant banking houses, bumbling incompetent national leaders, and other sundry calamities have fractured the already fragile and decentralized realm. The Overking's authority is now mostly nominal in outlying regions. Magical happenings have become more common and some say long-banished elves, dwarves, and things that go bump in the night have returned to forgotten homes.

A monotheistic church, the Supernal Orthodox Temple of the Puissant Sun Lord, also ostensibly dominates the realm with its monopoly on the manufacture and distribution of gunpowder. But powerful new heretical movements such as the Morning Star and Evening Star societies seek to restore a spurned female deity, the Celestial Lady, to her “proper” place in the pantheon. The weakening of the Overking's power has also allowed old pagan religions kept alive by country folks to be worshiped publicly again in the Hill Cantons. Further ominous rumors abound about the reawakening of slumbering Elder Gods and unspeakable evil...

Starting Characters
--Must be human. Roll 4d6 six times, throw out one die and apply each set of dice rolls to attributes as desired. Pick class. Multi-classing must be ok'ed by the GM.

Starting Assets
--All characters start with up to 300 gold pieces worth of equipment. PCs with a plausible back story reason may be granted one or two items from the equipment list.

--All characters can start with at least one Loyal Follower (1st level NPC/back-up PC, see below). Characters with Charisma over 15 can start with an additional lackey, hireling, or hired blade.

--All unspent gold over 20 gp is removed before the first adventure starts (you are down and out after all). So spend while you are still in your salad days and help stimulate our fantasy economy!

Experience Points
--Instead of simply earning experience for treasure, PCs gain 1 exp for each gp worth of treasure spent on training or research. The PC must find and recruit a mentor of the same class that is at least three levels higher than their current. Game time spent on training sessions will be determined by the GM.

--PCs can also receive 1 exp for each 2 gp of treasure spent in sword-and-sorcery-hero style debauched spending sprees (food, drink, romantic partners, fancy personal accoutrements, etc). Obviously, no mentor or training down time is necessary, but there is a 1 in 6 chance that a “complication” may follow (mammoth hangovers, duels, hostile constabulary, angry spouses, etc).

Style Points
- PCs can spend style points to re-roll a die roll of their choice (to hit, saving throw, skill roll, whatever)