Whither the Domain Game?

Back when I was in college I had a running joke of a game with my jaded friends about small talk and dull conversation in general. I don't remember how it started, but we started substituting third-person generic phrases for the actual words themselves.
Thus instead of bitching about how hot the summer was in Texas (duh), my friend would say something like, “me commenting on obvious weather pattern” to which I would respond: “me agreeing and following with a bad joke about the two seasons in Texas. Me starting long, pointless observation about dream. ”
In the last four days I have received no less than five separate nudges from readers and Domain Game players in the last four days about where the project is to which I say, “me giving halfhearted excuse about real life distractions getting in the way of promised gaming work.”
Where is the Domain Game is at currently: 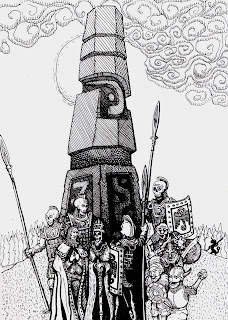 Sourcebook Writing. I have been mostly concentrating less on the fun work of game design and more on the necessary, but tedious work of writing all the exposition-style paragraphs to tie together the various subsystems and kooky ideas into a coherent product.


Long story short is that when you are working on a product that is purely a labor of hobbyist love this kind of work is a lot slower than planned.
I will probably switch back to doing finishing the more fun promised subsystems (“Pendragon D&D” campaign time; the fantasy supplement for the mini rules; hex-filling for natural resources; espionage; etc.) this week just to keep the wind in my sails.
North Texas RPG Con. Highly unlikely that I will finish the DG sourcebook work in time for unrolling at the Con since that is less than two weeks away at this point—unless the wind picks up and I have a long streak this week.

At any rate I am planning on having an interest meeting to discuss the project—fueled by drinks—on Saturday night at the Con, any and all readers are welcome to join.
Artwork. Some progress on this front, the drawing presented here is a draft sketch for the supplement by that notorious pie lover Johnathan Bingham . It shows an actual play example from the playtest, The Drune's creepy Thujans arriving by mysterious obelisk in the campaign world of Nowhere.
Playtest Game. The play-by-post is dragging a bit, slowed down by some late turn posting by players and me not riding herd really. I started gaming out the results of the expeditions' third month in Nowhere yesterday, so we are moving again.
If folks are interested—and the players give me permission--I will start posting highlights from the hundreds of pages of action the game has produced to date.
Me saying that work continues and expressing excitement.
Posted by Chris Kutalik at 10:31 AM