Enabled by some of you dear readers I continue exploring the domain game scattered through AD&D today. (Parts 1-3 can be found here, here, and here.) 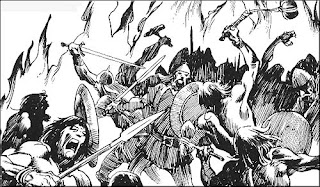 No Easy Entry to the Ruling Class. AD&D's Domain Game reads to me as a rougher and less assured ascent to power than in many other iterations of D&D's domain game. You get the impression that busting into the existing nobility is difficult to impossible task and that the PCs can only manage to tentatively push their way onto the lower rungs by carving out a small hold far from the civilized centers of power.

My read on this became reinforced when I started rereading the long sections in the Monster Manual on Men. It's startling to me how frequently high level NPCs show up not as lords and the captains of great realms but in relatively low-status commands. Indeed the wandering bands of humanity (what is driving all this restlessness? Political collapse?) seem sloppy with formidable characters. The MM makes a special point of emphasizing this fact: “Note that there will always [my emphasis] be higher level characters with any group of men encountered.”

These name-level “lords” rule over the most rudimentary of “strongholds”: “Bandit lairs will be informal camps 80% of the time, but 10% will be cave complexes with a secret entrance, and 10% will be regular castles with 1-4 light catapults for defense.”

Some of these high-level characters are even further down the status ladder. Merchants for example have a caravan guard leader that's a 6th-11th fighter. 11th level and all you can add up to be is the leader of some pot-bellied traders' guard detail? Slacker.

Looking back at how rigorous the steps to creating your hold are by the book—you must find a plot of land without a flag planted on, rigorously explore and fight for it, pour a very large stash of money into construction, and continue to fight and patrol your turf while fending off the newly jealous--no wonder you have so many powerful humans just grabbing the small amounts of power they can.

(Personally I have always found this supercharging of NPCs not to my taste and as a rule of thumb cut all the levels in half, but I think the point stands.) 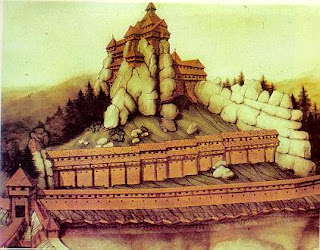 Build it and They Will Come. Circling back to that second to last paragraph above, building a stronghold is no easy task. Presumably the sheer difficulty and audacity of the rare name-level character who succeed is what creates that automatic pull for bands of followers. Indeed by the book, their new private armies start at the moment you have completed that task.

The DMG states bluntly that “fighters and clerics will be the principal territorial developers” (remember that only the three old OD&D core classes are even allowed to rule politically). The type of followers those two classes attract reflects that.
Clerics get a pretty sweet deal when it comes to followers—and early too. As an 8th level Patriarch or Matriarch after building a “place of worship” they get two bites of the apple: 20-200 (presumably civilian laity) followers and “men-at-arms”. The DMG gives a healthy mix of seven different troop types as followers: 10-50 light, medium, and heavy cavalry and from 25-140 light and heavy infantry.

What's more the cleric's army of zealots “are fanatically loyal and serve without pay so long as the cleric does not change deities and/or alignment.” Nice.

Fighters get a tough-cookie lieutenant (5-7th level fighter) and a slightly-smaller unit. Fifty percent of the time a company of 20 light cavalry supported by a 100 heavy infantry. There is a 40 percent chance of getting one of two smaller, but better armed companies of heavy infantry and a further 10 percent chance of getting a shock group of 60 medium-heavy cavalry

The common thread for both the fighter and the cleric in follower type is that they are the only classes receiving what is essentially an army (albeit a small one scaled to a petty warlord). Interestingly in composition and numbers they run pretty close to the groups of men description in the MM.

All other classes generally receive much smaller bands of similarly-classed individuals, here the ranger gets 2d6 creatures, there the assassin 7d4 lower-leveled assassins. More of a henchman/apprentice set-up writ slightly larger.

Why is this significant at all?

Mostly because it seems pretty dang hard to find and hire up large bodies of armed men in AD&D. Skip over to the DMG's description of mercenary soldiers on page 30. While it leaves it up to the DM to determine the likehood of encountering mercenaries, it does suggest in detail how many of such and such type you do meet. Significantly the numbers are pretty small by the standards of raising an army: 70 percent of the time you will only find a range of 1-12. A further 20 percent of the time you're only getting 2-30 and only 10 percent of the time are you reaching numbers getting into the low-range ballpark of those groups of starter followers.

Shewww so much still to cover, we have peasants revolts, construction costs/time (and it's larger implications to building settlements), hirelings more broadly, etc. Tomorrow perhaps and then on to tackle B/X, Mentzer, and OD&D.
Posted by Chris Kutalik at 2:03 PM