Taking where we left off from yesterday, I look at what the Dungeon Master's Guide (the one with the ugly red dude and chainmail bikini gal on the cover) says about AD&D's implied domain-level play.

The longest and most direct section that handles this is the Territory Development by Player Characters section (page 93). There are a number of obvious observations here and some interesting subtle ones both in it and in the accompanying sections around it that I never caught until rereading these passages through this lens. Let's check through them. 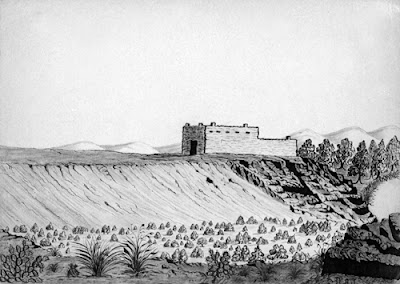 Feudalism is Not the Default. One of the consistent themes you see in other treatments of D&D's domain game is that the political structure is almost always based on an idealized version of European feudalism (maybe with a few token nods to the title ranks of other cultures). You have a graduated hierarchy going from barons, counts, dukes, kings each owing fealty to the other. You have peasant families tied to the land. And you have the PCs inserting themselves into that existing structure.

I have written before how Gygax explicitly breakswith faux European medievalism as the one and only implied backdrop of AD&D in the Social Class and Rank section (which precedes and is clearly tied to the Territory section). Indeed he repeats this more succinctly in the first paragraph here saying “the exact culture and society of the area is up to you.”

Interestingly if you flip back to the section right behind it (Peasants, Serfs, and Slaves) Gygax states that, “any character who forces peasantry, serfdom, or slavery upon any inhabitants of an area he or she controls will have to be very careful to guard against uprisings.” There is a strong backwards implication here that slavery, serfdom and even a freeholding (perhaps tenant?) peasantry is not the default state of most of those settling into a cleared hold. Given the fact those rural laboring classes made up 80-90 percent historically of most west European medieval societies that's quite an assumption.

Wilderness Clearing is the Central Adventure. The real meat of the Territory section is the example of how to handle the mechanics of wilderness clearing. (It's important to note that Gygax sets it up as an example, as in here's how a DM could handle it if organically developed in the campaign, there is no set one way on how to adjudicate it.)

Example or not it's a pretty fascinating glimpse of play that clearly focuses more on the adventure of carving out a section of the howling wilderness than the routines of established power. It's not about courtly intrigue or political machinations with other civilized powers and it's definitely not like retirement it's about barely holding on in the wilderness through continuous exploration, adventure, and combat. 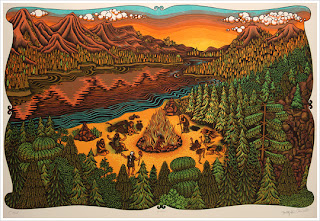 Let's parse it out point by point:
Domain Carving Starts Way Out in the Wilds. “Assume that the player in question decides that he will set up a stronghold about 100 miles from a border town.” Not on the border of civilization but so deep in the wilds to be half a week or more travel to the edge of civilization.

You Need Detailed Zoomable Hex Maps. The player chooses (or co-creates a site as in the example where the player says he wants a site with a high bluff overlooking a river) a site and the DM presents him with a rough map showing the campaign hex and the six surrounding hexes. (It's unclear here if these are the whopping 20-40 long hexes described in the outdoor section.) You also need some very small-scale detailed maps 200 yards to a hex with an imposed larger hex at a one mile scale (nine smaller hexes wide).

The Clearing is an Intensive Hexcrawl Adventure. Now Gygax starts talking about the clearing much as he is describing the dangers of exploring hexes in the wilderness but in a through search grid like operation—and it's clearly meant to be an adventure to be done by the PCs themselves over several sessions almost a mini-campaign if you think about the scale involved:
“The player character and his henchmen and various retainers must now go to the construction site, explore and map it...Use actual time to keep track of game time spent exploring and mapping (somewhat tedious but necessary). Check but once for random monsters in each [200-yard?] hex, but any monster encountered and not driven off or slain will be there from then on, excepting, of course, those encountered flying over or passing through. After mapping the central hex and the six which surround it, workers can be brought in to commence construction of the castle.”

Danger Continues Well Into Construction. Interestingly this exploration and fighting doesn't end after the first bout but continues throughout the long period of building the hold:
“As [construction] will require a lengthy period of game time, the player character will have to retain a garrison on the site in order to assure the safety of the crew and the progress of the work (each day there will be a 1 in 20 chance that a monster will wander into one of the seven hexes explored by the character, unless active patrolling in the territory beyond the area is carried on).

While the construction is underway, the character should be exploring and mapping the terrain beyond the core area. Here the larger scale of about one mile per hex should be used, so that in all the character can explore and map an entire campaign hex. There are MANY one mile hexes in a 30 mile across campaign hex, so conduct movement and random monster checks as is normal for outdoor adventuring.”

Constant Adventuring is Required. Even with all the intensity of the above two phases the stronghold is never assured of a dull safety it remains on the edge only barely mitigated by the counter-moves of the PCs: “1) Once per day a check must be made to see if a monster has wandered into one of the border hexes which are adjacent to unexplored/ uncleared lands.

2) Once per week a check must be made to see if a monster has wandered into the central part of the cleared territory.”

The nature of the set-up demands that the PCs and followers be constantly exploring, expanding and holding the territory:
“Monsters which are indicated will generally remain until driven out or slain.

Modifiers to this are:
Posting and placement of skulls, carcasses, etc. to discourage intelligent creatures and monsters of the type able to recognize that the remains are indicative of the fate of creatures in the area.

Regular strong patrols who leave evidence of their passing and aggressively destroy intruders.

Organized communities whose presence and militia will discourage all but organized groups who prey on them or certain monsters who do likewise.”

And even when they are settled in and “patrolling the territory regularly--about once per week on a sweep basis, or daily forays to various parts of the area, the character will need only check once each week for incursions of wandering monsters...on the Uninhabited/ Wilderness table.”

That's a lot of vigilance and if handled imaginatively a heap of fun trouble to rain down on player's head. In otherwords little to nothing of political tedium or record keeping and the like, just more emphasis on a larger stage version of core D&D play areas: exploration, combat, and their related resource management.

Today's analysis is growing overlong. I will pick up later about how the copious encounter tables play a central role in providing a simple, workable (and fun) system for handling the mechanics of domain growth and ongoing adventures. I will also look at other sections on hirelings and followers to see what they say about AD&D's domain game.
Posted by Chris Kutalik at 12:04 PM