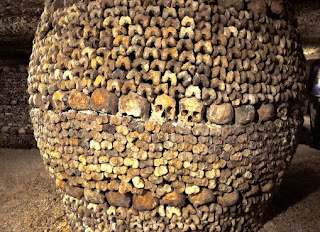 Moving, work, busy blah blah blah. In the meantime some news from the campaign for players and voyeurs.

St. Jack's Church of the Blood Jesus has gone underground—literally. After three weeks of backbreaking work—under the expert supervision of the Termex the Robodwarf--by devotees of the syncretistic cult, a catacomb space has been excavated under the Marlankh workshop of a Sitvek, a cult follower. It's unclear where the nun-maenads acquired the skulls and other bone bits that make up the exquiste ossuary-like sculptures in the cramped little vaults. The new sparagamos fane is a "thing of beauty" reports cult leader Vatek son of Vatek. See map below of the currently excavated space. 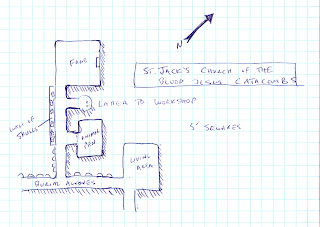 High society in the southern cantons is all a-titter with the return of the Lady Szara to her town-manse in Marlankh. The notoriously-erratic lady abruptly moved away two years ago “to visit relatives back in the Corelands” and her manse was overtaken by the seemingly undead Kugel the Lucky. That haunting must be at an end as five wagons drawn by somewhat unnerving, red-eyed black stallions arrived just yesterday piled over with her belongings.

Guildsmen of the Illustrious Workers of Wood (commonly referred to as the “Totterers”) are celebrating the fifth century anniversary of their local lodge this week. A giant wickerman has been erected in the Plaza of the Horned Oracle for the festivities.

The scurrilous tribe of were-worms who migrated from the Weird into the Slumbering Ursine Dunes last month have stepped up their depredations in the area. The Marlinko Rada has hotly debated a plan to introduce giant robins into the dunes to halt the menace. The Guild of Accipitraries, Drovers, and Ankle-Beaters has begun a program of mutating, growing, and training said birds in anticipation of the lucrative contract.
Posted by Chris Kutalik at 12:14 PM