Before I call the deadline for the Undercity Contest (you have two and a half hours to send an entry in), I wanted to sneak in some campaign stuff for current and incoming players. First the recent news then old news as a record.

A Kezmaroki trade-dromon, The Effectuator, sighted a mysterious golden domed barge in the deep seas south of the cantons. The sighting, the third such, is being heralded in backhills hamlets south of Bad Rajetz as a holy sign. In those sad, curiously ignorant settlements there are rumors of the rapid grass fire spread of a schismatic sect that welcomes a barge-like manifestation of the Sun Lord.

In other exotic cult news, St. Jack's Church of the Blood Jesus has passed its sell-by date as the flavor of the month. Doctrinal arguments over virgin births, a shortage of animals suitable for the Sparagmos rites, and a growing annoyance to the Rada have withered the strange sect's recent growth spate. Despite the setbacks, Vatek son of Vatek, continues to preach the Good Word along with the most devout of the nun-maenads.

A wandering band of were-worms is rumored to have taken residence in the Slumbering Ursine Dunes. The growing thorpe of Kugelberg has reported on two small raids that have stolen some property and weirdly top-soil from the fields.

Players' Campaign Hex Map (and as always I remain an Unreliable Narrator): 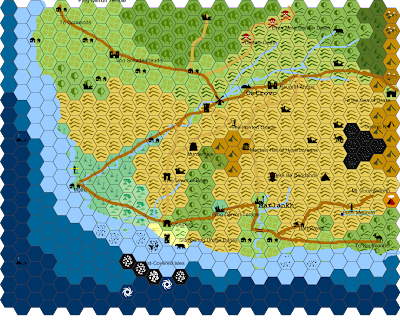 Old News:
Libor the Lugbrious, that most dolorous of highwaymen, has been plying his trade again in the southern bounds of Marlinko canton. The Rada has upped the bounty for his head to 1200 suns.

Vatek, son of Vatek, is claiming to have unearthed a 500-stone beet from his tenant farmer's field in the southlands hamlet of Ctyri Ctvrt. Most strange of all is the twisted face-like blemish near the giant beet's crown. A local shepherd claims to have heard a booming voice emanate from the storage hut where it is currently housed two nights ago.

Dashing Marlankh bon vivant Jarek the Nagsman is reputedly looking for “rough, sporting types” to participate in a “tiger-baiting soiree” at his town-manse. He's offering 200 suns ahead since nary a citizen took him up on his previous 60 sun offer.

The biennial blood rains have been falling all through the Cantons this week. Expect great big buckets of thick sanguine downpours throughout most of the week. Old wives maintain that the rains are due to water miraculously forming into rain clouds over the Scarlet Sea. Men of learning, of course, reject such superstitious claptrap and counter sagely that it's the Lady's beating of the Sun Lord with her silver chains that creates the soil-enriching rain.

One-Armed Jiri, master of the Mako League of the Free-Handed, is seeking nimble minds and stout hearts to retrieve a matter of “trifling importance” from the Mountain Hall of the Hyperboreans. The redoubtable Man Around the Underworld is offering good suns upfront, left arm as collateral, to any soul seeking employment. Interested parties should present themselves at the Square of the Bog Haruspex for further details. Grooming optional, but appreciated.

The eastern hinterland town of Bad Rajetz (known as Rientzdorf by Nemec-speakers) have stopped all exports of their renowned leather goods to Marlankh. No caravan has left the town for going on two weeks now. Speakers of the Rada and fetishists are concerned.

Raugraf Androj Animachus the Younger is celebrating his ascension to the title of his father Androj Animachus the Right Bastard with a two-day fair at his hold just east of Ostrovo. Feats of arms, wrestling, cat-juggling, midget-tossing, a grand melee, giant toad races, and other contests will be held and great prizes of gold and baubles awarded to the victors.
Posted by Chris Kutalik at 9:29 AM