What the Hired Help Say About Ruling the Gygaxian Implied World 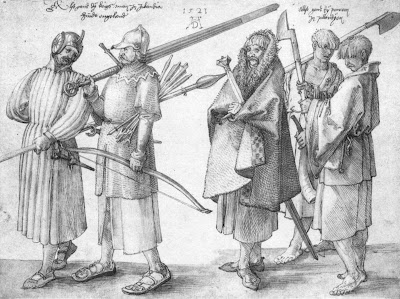 “Who built the seven towers of Thebes?
The books are filled with names of kings.
Was it kings who hauled the craggy blocks of stone?
And Babylon, so many times destroyed,
Who built the city up each time? In which of Lima's houses,
That city glittering with gold, lived those who built it?
In the evening when the Chinese wall was finished
Where did the masons go?”
-Bertolt Brecht

Remember my series exploring the scattershot (yet more far more comprehensive and interesting than is normally given) domain-level play and implied world in first edition AD&D? Longtime readers may remember that I had a few more posts lined up that I never really finished off, posts that have continued to nag me despite me having them buried like the tell-tale heart deep in the drafts box. (You can read the whole series here, here, here, and here.)

Hark! Louder, louder, louder. Argh. I dissemble no more, tear up the planks and let's finish this long due series.

Let's come back around with some Talmudic readings of the section on Hirelings in the DMG (p. 28-31), a section that yields quite a bit of information on what the AD&D domain game and implied world is.

Working Stiffs and the Making of Things
The section on hirelings explicitly begins—with the first sentence—in the context of domain-play and the power arc of the AD&D character: “Most hirelings are dealt with under the section entitled EXPERT HIRELINGS - those which are typically employed at such time as the character in question has an established stronghold. Common, standard hirelings are basically the usual craftsmen or laborers taken on by lower level player characters.”

That's clear and straightforward: one entire class of hirelings revolves around life in a stronghold, the other is more the straightforward useful hacks for adventuring.

A quick look at Standard Hirelings seems to hold this view you have the porters, teamsters, and pack handlers that deal with the copious (and mightily heavy with coinage at 1/10th a pound) amounts of swag being hauled out of murderholes. You have linkboys to free up your torch arm for that Fauchard-Fork and perhaps a valet to shine your boots, high, hard. These stiffs are easy to come by (most if not all can be found in your average village) and mostly work in short stints of work paid by the day.

But now this is where things get (somewhat) interesting. This is where there are hints at a “middle game,” a sort of higher-level play where a character hasn't gone through that long, tough process of carving their hold in this post-apocalyptic AD&D world but has resources enough to start acting on a larger social scale.

Because, see, the Standard Hirelings list is not just the adventuring-specific mooks above, but includes a broader range of semi-skilled and skilled artisans. So you have carpenters, leather workers, painters (limners), and tailors too. Significantly you can hire all these hirelings at a monthly scale but this “assumes that quarters are provided for the hireling, and that these quarters contain a bed and like necessities.” It assumes further that you actually possess a base of operations. 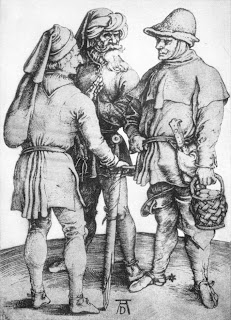 More over it sets up a freeform way to handle production of goods:
“It is not practical to try to determine the time and expenses necessary to accomplish everything possible for the scores of standard hirelings possible to employ, so each DM will have to decide. For example, assume that a player character hires a tailor to make plain blue cloaks for all of his or her henchmen. This will take only about 1 day per garment and cost the stated amount of money plus 5 c.p. (10% of the cost of a cloak) per cloak for materials. However, if the same cloaks were to be fashioned of a material of unusual color and have some device also sewed upon them, time and materials costs would be at least double standard, and probably more.”

That first sentence strikes me as a great example of the overall design philosophy of that edition--a sweet spot for me. It acknowledges the near-infinite imaginative possibilities of each individual campaign and implies that the hireling list (and the following production rules) are just guiding models and that you can and should be specifically tailoring lists of such working folks to your own quirks. Black lotus powder distillers? Pleasure barge shipbuilders? Sure here you go, here's a detailed example/baseline for their wages and what you charge the players.

Spun a different way, this whole subsection is toolbox support for the level of owning a creaky old caravel, running a scurrilous hole-in-the-wall tavern, squatting a cleared-out mini-dungeon, raising the standard of your own free company, or any other thing that I remember being a big post-lower level goal of our play groups as a kid.

And despite the ostensibly more-comprehensive approach to domain-play of the other best attempts of D&D editions from the Companion set to Birthright, AD&D alone is the sole attempt in the game to orient such a specific, granular approach to work and working people.

There is no beancounter automatic table of population growth. To entice these folks to said base the player actually has to put some effort into it, “if the offer is for long term employment, only 1 in 6 will be willing to accept unless a small bonus is offered--day's wage is too small, but double or treble that is sufficient to make 3 in 6 willing to take service.” The implication being that you have to hustle and bribe normal folks (to get over their fears, I suppose) and leave the walled confines of beleaguered civilization.

It's not abstractions like “peasant families” and “domain levels” producing things in the Gygaxian world, but NPCs with at least some identity and face. Frankly, that's a game-world vision I find more human scale and interesting.

Onwards and upwards, next we look at how these sections imply certain things about urban life, guild work, the life of mercenaries, general handwaving of duller aspects of domain-play, etc. Stay tuned.
Posted by Chris Kutalik at 9:18 AM