I have a small laundry list of failings of the fantasy genre that drive me absolutely bonkers. Sitting right near the top of that list—right after the big-tickets like cardboard, Tolkein-rip-off—is that way too-common one of characters whose world view drip with the mundane and modern. Motivations and dialogue that are so jarringly familiar and pedestrian—minus great compensation in other areas—that they invariably yank me right out of that feeling of being somewhere else entirely (one of the great points of fantasy)

What I find it so deeply disappointing about that drek is that fair-to-good novels in another genre routinely succeed in shifting that feeling of being in a different world despite it's painstakingly real-world orientation: historical fiction.

It has passed into cliché, but it's worth repeating the old L.P. Hartley quote: “The past is a foreign country: they do things differently there.” And that's what I love, the same ability--like the best fantasy--to walk around in the shoes of characters that have values, perspectives and motivations mostly different from my own.

Skipping to the chase, here's a list of historical fiction that spans the pre-industrial era that I found particularly inspiring for me as a GM: 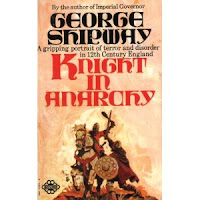 Knight in Anarchy by George Shipway
Brutal and vivid this short novel centers on the life of Humphrey Visdelou, a Anglo-Norman small fiefholder in the Anarchy (the 12th-century period of civil war that serves as the backdrop for Jeff Rients's famous Wessex campaign).

It hovers close to the ground (though Humphrey becomes involved with many of the big-ticket events of the day) and is painstakingly researched with a character and period detail that surpasses the “alien test” for me.

Sadly out-of-print and difficult/expensive to find in the U.S. outside of libraries. (I lucked out and fished one of out the dollar bin of a used bookstore).

The Warlord and Saxon Chronicles, Azincourt by Bernard Cornwell
The novels of the insanely-prolific Cornwell, best known for his Napoleonic-era Sharpe books, are somewhat predictable in their choice of protagonist--invariably a rough, but honorable military man who bucks authority and religion (almost to the point of being an “Eternal Champion” of sorts). Nevertheless he writes some great adventure novels.

Worth checking out in particular are the Warlord books set in historical Arthurian Britain (with some agnostic, believable whiffs of druidic magic), the Saxon chronicles of 9th century England and the stand-alone, recent Agincourt novel.

Renault's attempt to reconcile a more historical Theseus with the assumptions of the Golden Bough. The first book goes through his sojourn in the Labyrinth palace of Minoan Crete, the second with the argonauts attempts to capture the “golden fleece.”

It's also worth picking up her other novels oriented around the Hellenic world.

Q  by Luther Blisset
Opening up with a bang in the heat and turmoil of the Peasant Wars and Reformation in the Holy Roman Empire, this sprawling “thinking persons' thriller” follows an obsessional Inquistor and his quarry, a radical Anabaptist, through several decades and cities in western 16th-century Europe. Interestingly Luther Blisset is a coded pseudonym for a (talented) collective of anonymous Italian writers.

Shadows of the Pomegranate Tree by Tariq Ali
Ultimately depressing but captivating, this novel tells the story of an Andalusian Muslim noble family immediately after the fall of Granada. Good balance to the heavy Christian-center of most medieval historical fiction.

His novel about Saladin is also good if a bit drier.

The Walking Drum by Louis L'Amour
Yep you read that right Louis “the hoary old western novelist” L'Amour. He just so happened to also write a good, if not great early medieval adventure tale that takes a slave and pirate from the coast of the Frankish empire to the splendors of Caliphate Cordoba and points east.

Name of the Rose and Baudlino by Umberto Eco
You've likely heard of the first (or seen the movie with Sean Connery), Eco does a stand up job of bringing to life the details of real life and the social/intellectual trends of medieval Europe.

Baudlino is nowhere as accessible and gripping as Name of the Rose, but worth picking up if you have an interest in Constantinople around the time of its capture in the Fourth Crusade.

Also worth checking out:
The Lymond Chronicles and The House of Niccolo series by Dorothy Dunnett

With Fire and Sword, The Deluge, and Fire in the Steppe by Henryk Sienkiewicz

I, Claudius, Claudius the God, and Count Belisarius by Robert Graves

Gates of Fire by Steven Pressfield

So how about you? Any lovely old favorite historical novels of interest to us fellow fantasy gamer
Posted by Chris Kutalik at 10:37 AM