Read as literature J. Eric Holmes' novella The Maze of Peril is fairly awful, but a read of the book as a window into the pulpy, exuberant kitchen-sink D&D of that good doctor it is supremely enjoyable. One of my favorite sections of the book occurs in a large underworld lake dominated by a pyramid-temple of Dagon.

After the protagonists loot the fishy demonic temple, they are confronted... 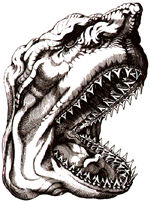 “Out of the black waters of the underground lake rose a triangular dorsal fin. The creature would have been immediately recognizable as a huge shark except for the thick muscular arms and hands with which it drew itself up upon the rocks. As the entire body became visible, the startled adventurers could see humanoid legs and bare feet supporting the fish-like tail.”

Totemic beast cults—and their shape-shifting devotees--have run old in the Hill Cantons history, so I knew I had to have one for my campaign. Thus was born Andimachus, the wereshark cousin-antagonist of the resident godling of the Slumbering Ursine Dunes, the Master. Following are the stats I did for that game (he has been dispatched in a near-thing by the players long ago).

Old salts will tell you of the subtle signs of the human-formed wereshark: a slight greyness of skin, a deadened, hard cast to the eye, a hint of razor among the teeth, a tendency to take positions in the banking guilds.

The monsterish version is inescapable obvious, rearing a full 8-foot tall with the pronounced snout of a shark, sharp-toothed grin, dorsal fin and muscular clawed arms. They are as fleet in the water as their fishy brethren. In this form they can only be harmed by silver or magical weapons.

Despite their bestial rapaciousness weresharks are drawn to soft luxuries in their off hours. Treasure hoards inevitably will take the form of soft, exquisitely-woven silks, velvet cushions, choice wines, fine silver dinnerware, and the like as opposed to straight cash.

Those unfortunates bitten by the wereshark will themselves become victim to lycanthropy on a 30% chance (remove curse to lift). On a full moon—at high tide—there is a 90% chance that the victim will transform into his new form and seek out others of his kind in the murky depths.
Posted by Chris Kutalik at 2:41 PM