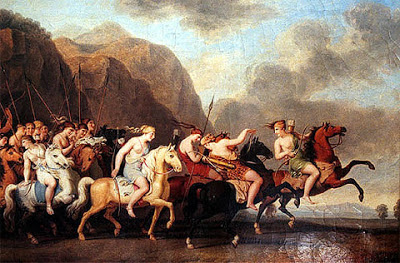 And now the News...
Our new Decade-King continues to stubbornly stay on the lips of Kezmarokis. Seeking to overturn five centuries of cherished tradition of not having to see or hear from the monarch more than the usual “touch the jewels and wave” appearances of the great festivals, the ceremonial monarch announced to great shock that he would deliver a “rousing bit of oratory” from the organic-machine-themed Yakquirby Balcony on Sunlorday.

In other news, noting the considerable erosion and water damage to the external walls of the palace, the Autarchs have (finally after decades) released funding for much needed structural work on the teetering pile. A massive cocoon of scaffolding went up around the exterior immediately, much to the praise of local citizenry.

The Amazons are celebrating again their biennial Ebon Festival of the Pearls on their distant isle near the resting point of the Sun Lord's daily ride. The festival marks both the climax of the black pearl harvest from the swamp-polyps and the victory of that muscle-bounded race of maidens against the invading forces of the Overkingdom in the Twicefold Battle of Vague Suggestiveness now some 112 years ago. It is said that the high-point of the festivities is the public bathing and drinking by their much-feared, rubenesque queen of the blood of 12 male lovers.

And in the identified magic items department...
The Four Brother-Blades of the Evening Red
In the darkness that fell after the last Latter-State Hyperboran necromancer-king was hung with the guts of the last ur-bureaucrat--a time so dark that the chatiness and love of written language so dear to our age was reduced to flashes of the sordid art of epic poetry—four brother hero-champions of the Muhtl people arose. These brothers, though noted for their bloodlust revels and vicious scalping, were unswervingly loyal to each other and when the vicious Muhtl were finally put down by the Kaftor matriarchs—and their own deaths by castration at hand—through dark oaths had their respective souls transferred in part to their beloved blades.

If all four blades are wielded in battle by a single party, each sword becomes +2 to hit and damage. On a natural 20, the blade lands a near scalping blow to a humanoid causing an additional d6 bleeding damage. Striking the four blades together while chanting “hrom, hrom, hrom” (the Muhtl word for “thunder”) will produce Call Lightning once per day at the level of the strongest wielder. All magical powers of the swords are only functional when all four swords are in use.

Individually each blade exhibits a bare, but strongly-willful sentience (INT 5, EGO 15). When touched the sword emanates a tremendous—and malign—sense of potency, a potential warning that the blades seek to turn the wielder into a debased and violent existence of wanton evil. (When wielding the sword, if erections last for four or more hours, call a cleric.)
Posted by Chris Kutalik at 10:43 AM