Last week, I had my fantasy creative writing class take up one of those big ticket items in good speculative fiction: imaginative monsters.

Since nothing will ruin a good fantasy more than a dully-imagined monster—ok, ok dully imagined anything, but bear with me—we spent a good solid two hours messing around with a few ways to free up their imagination.

Hour One: The Exquisite Corpse
I set the classroom up talking about historical bestiaries, those great, colorful catalogues of creatures strange that issued forth from the intellectual fog-of-war of the medieval mind. Thumbing through a slideshow of images from the Physiologus, the Aberdeen Bestiary, the Queen Mary Psalter, and other works of the time we discussed how many of the most fantastical creatures were composite monsters drawing from a combination of 2-4 different animals. 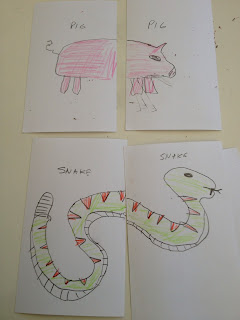 Then we got down to the hands-on exercise. I handed out pairs of index cards instructing them to draw a front and rear half of any animal or monster they could think of with an eye to having them mostly line up to about an inch and half in the center (and labeling each half for reference). After all had drawn 2-4, we collected up the cards randomly shuffling them into front and rear decks. I then had the kids draw them one by one, naming them and assigning characteristics and fell powers to each as we went.

The resulting list was fairly hilarious. We had the dreaded Pigama, a piranha-headed hog with its razor sharp teeth and wallowing, nudging up to the snobby snake-dog hybrid Snog and the poison-farting Snalf. Striking the proverbial iron in its heated state, I had them write them up and people their own budding worlds which has compounded since with a flood of ever-stranger fauna. 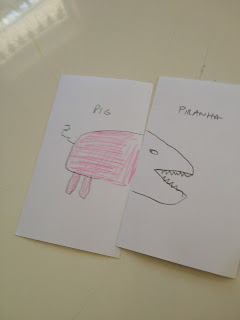 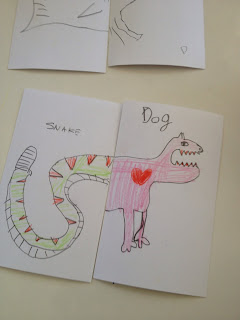 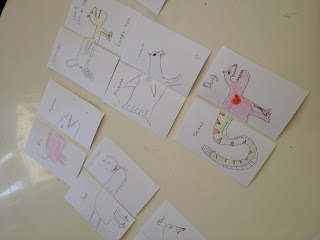 All in all an enjoyable exercise that can certainly be carried over into monster creation for a fantasy rpg campaign.

Next up, a run-down in the second hour of building clay monsters and fighting them out in our classroom arean.
Posted by Chris Kutalik at 3:03 PM