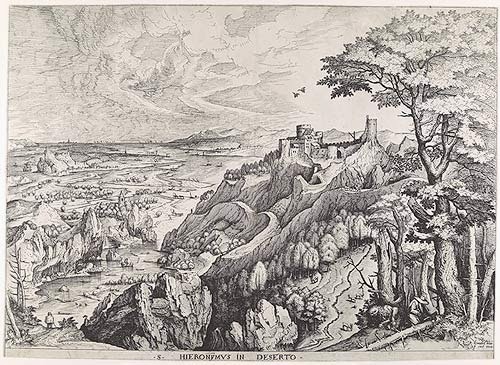 Many a virtual page has been sacrificed on this here blog in elaborating various pointcrawling schemes. One could leave with the impression that I was completely down on hex maps in general.

This is really not at all the case. I still find that hexes still have a great deal of utility. Their numbering system and wide-open organization are ideal for any campaign I run where thorough 360-degree exploration and domain game-like clearing are central activities (such as the new colonizing Feral Shore phase of the campaign). It makes it hella easy in that context to organize the session when the players just say “ok so let's explore some of the hexes around the fort, we will take 21.20 and hop on to 21.19 and 21.18”

But I just can't leave it alone.

When it comes to the nitty-gritty of the actual site organization of a single hex, I tend to fall back on using a pointcrawl nestled right up in the hex. My brain continues to rebel against the yawning emptiness of even the five-mile hex in traditional D&D wilderness hex thinking (that point being made so well here) and it needs to fill in that space with a number of small little “rooms.”

So when it comes down to that kind of micro-exploration, I like having the more focused choices of the dungeon and the point-connector schema mirrors that nicely.

How does mixing the two systems work?

A good starting point for showing what I am on about is to boogie back to my original inspiration for the idea, that wonderful old Avalon Hill warhorse (that I could never figure out how the hell to play with all my preciousness as a tween): Magic Realm. One of the most fascinating and visually-interesting components of the game were the hex geomorphs that allowed you to build a totally new gameboard everytime you played (they also could be flipped to reveal a nifty new purple-hued configuration when the hex was transformed by sorcery, but no need to go into that).

The hexes provide an interesting way to break down the hex into smaller areas and provide a number of constrained exploration choices and dilemmas for a party wanting to scout out the whole area.

My own system is a bit less “geomorphy,” the external connections into the hex are a bit more abstracted and free-form to push back on the “gaminess” and allow for multiple approaches into the hex. I use the same color and connector in my wilderness pointcrawl (rather than restate the whole thing just look here at the text right after the pointcrawl illustration). Here is a semi-hypothetical example.
The only significant difference is the scaling amount of time between points and the dots on connectors that represent extra travel time. On occasion my pure wilderness pointcrawls may include contours, I make greater use of these in the intra-hex pointcrawl.

That's really all there is. As always the system continues to evolve, some concepts getting dropped as too fiddly, others getting more elaboration over time.

Questions? Suggestions for improvement?
Posted by Chris Kutalik at 9:24 AM