News and the War-Bear Marching Song

Even the Hills have slow news day, so here are some bears! 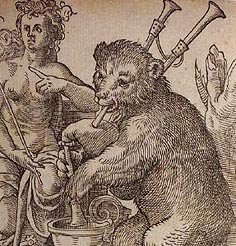 For a city made so jaded by centuries of siege, strange, supernatural shocks continue to rule the news from Kezmarok. For two long minutes it seemed that Lower Kezmarok was delivered from its oblivion.

Mid-morning the barely visible skyline of that half of the city flashed back into corporeal existence along with its terrified citizenry—a score of whom managed to run to the higher environs of the rock before the city ward just as abruptly jerked back into its slow fade. An excited crowd of stevedores who rescued the survivors tell of wild stories of the ward floating in a bubble inside a solid metal tower as the sounds of a great battle issued outside. The survivors have been rushed to the palace of King Ulyosalik for their own safety and comfort.

Goatherds across the Hill Cantons have been reporting a staggeringly large number of night-time mutilations of their flocks. Men of science deny that there may be a connection between this and the recent sightings of large metallic spheres floating in the night sky over the last week.

While awaiting the return of the masters of the Feral Shore, the noted war-bear Preved! has been living up to his reputation among the folk of Kingsten. Okko, the steward, has been forced to listen to countless grousing of couples who right dab in the middle of affairs amorous in nature were interrupted by the sudden, terrifying appearance of the bagpipe-wielding bearling screaming his trademark name.

Despite the disruptions, Preved has seemed to charm the camp and that old timeworn marching song of the bears has become a favorite of the after-work bonfires.

Many a banner flutters above your head,
Many a hero that is famous in story
Count and make ready then, cubs of the forgotten dead,
Fight for your Hetbear and old Medved's glory.

Trumpets are sounding, beornlings are bounding,
Stand to your polearms and march in order;
The kozaks shall many a day, tell of the bloody fray,
When the War-Bears came over the border.
Posted by Chris Kutalik at 12:50 PM