A Wee Bit More on Jumpstarting a Tékumel Revival 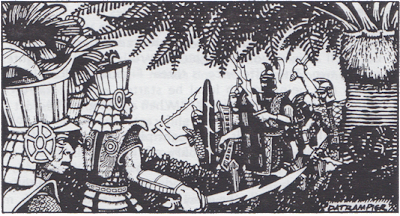 Looks like a few more virtual fronts are being opened on the ether to tackle the Tékumel revival question.
Brett Slocum has set up a new blog, The Eye of Joyful Sitting Among Friends, and is involved there with a parallel discussion to yesterday's. He has a rather simple solution: play more with whatever system you have on hand. I would urge readers interested in such esoteric matters to hop over there and weigh in.
Along the same lines, Howard of the Tekumel Project has launched another blog, Heroes of the Age, to discuss gaming on Barker's planet. Check it out here.

Speaking of playing in the setting more, I am looking to set up a pick-up game of Humanspace Empires at one of the open-game sessions at the North Texas RPG Con this coming June (where I will also be playing in Steve Marsh's EPT game). Drop me a line if you are attending and have any interest in playing.
Less-lazy post coming later. (Because I know you hang on my every word.)
Posted by Chris Kutalik at 11:01 AM