Campaign Artifacts of the Weird

It's a given that long-running campaigns accumulate equally long paper trails. Perhaps less given, but likely frequent, is that collection entails more than just the run-of-the-mill mundane paperwork.
After a while the burgeoning horde of maps, adventure site write-ups, character sheets, tallies of ill-begotten loot, and the like starts to increasingly share dusty cabinet space with the eccentric flotsam and jetsom of creative gaming.
If you are long-suffering GM-type you likely know what I am talking about.
At the tame end are the simple visual aids. A picture yanked from the Internet representing a tapestry or a mudbrick fortress that the characters are seeing. Some props start to work themselves up the strange and obsessional meter—here an old rusty lock to be used in a lockpick challenge or there a bright-painted Oaxacan folk mask.
Put in decades to a single world and you might make up to the masters level. Just remember that magnificent treasure horde of M.A.R. Barker's collection being busily—and lovingly--filed away up in Minnesota.
With three years in the Hill Cantons I am nowhere near that level of things sadly, but sorting though the rather over-packed desk drawer containing my GM material yesterday I was amazed by the strange diversity of stuff. Most of it is in the form of spiral notebooks. Some of these are reasonably sensible brainstorm notebooks, others...others are just a little more odd.
My favorite are the ones from my sketch book, they usually start as doodles more often than not on anyone of the interminable conference calls that make up my day job (your union dues at work).
Occasionally, one actually makes the cut and turns up at the table as a goofy player's map or a cross-section of a place of interest. Sometimes they are purely for my creative jollies, but more often they are the raw fuel or cosmic unconsciousness of a world in creation from the bottom up. (Nine times out of ten a setting detail extemporized and/or co-created with the players at the table.)

I will stop writing and just show a few to give you an idea. 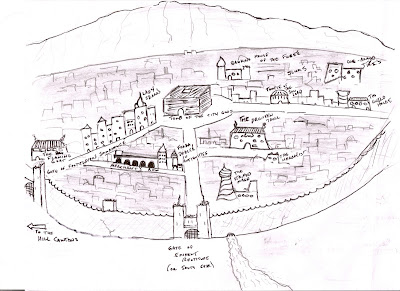 This would be a symbolic map of the insular border town of Marlankh, home base of the San Antonio HC crew. Any resemblance to places both fictional and not is purely coincidental.
Now here's the Big One, the cosmology of the “Over Hill Cantons”. (Click to embiggen for detail.) 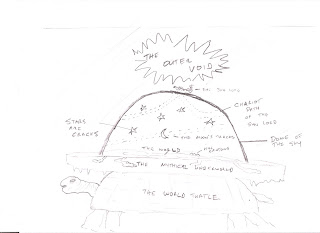 On the back was this hastily-scrawled post-session bullet point jam:
The Supernal Orthodox Temple of the Puissant Sun Lord
The Celestial Lady
At least three secret societies: Evening Star, Morning Star, and the Starry Void.
Old Gods
At least five gods: The White God, Wodan, Svat the Four-Faced, Radegast the Host, the World Turtle.
All I can say is I hope that if I die suddenly that no one paws through all the stuff. “He seemed like such a nice and polite man.”
Now it's your turn, show and tell time. What weird wonders lurk in your cabinet?
Posted by Chris Kutalik at 6:09 PM