Plans for a “face-to-face” second round of the Domain Game are rolling right along. The official count of players opting in is now at ten: two “lord” players and eight “casual” players. (Space for casual players is still open.)
The campaign will come back to the extra-planar wilds of Nowhere, this time centered around a foothold colony that has been clinging on to a section of the southern continent for almost a decade.
While it's a decidedly rough-and-tumble frontier society compared to Elsewhere, a trade town has developed near the obelisk gate and rough trappings of civilized society—and resulting intrigue—are starting to bloom. Players will be navigating through less of the Jamestown-like experience of the Domain Game 's first phase and more of a take-off period. 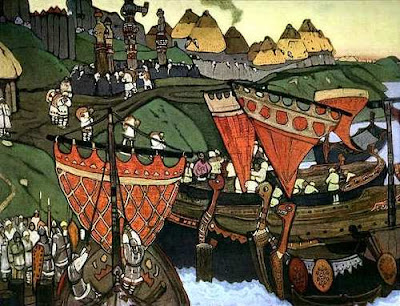 The Three E's
Although there are still a lot of angles to be developed, I am envisioning the campaign as a “deep sandbox” with a meta-theme for player motivation that boils down to: Exile, Exploration, and Expansion.
All of the PCs, indeed all the denizens of the Lands Beyond, have been exiled from Elsewhere. The players are part of the last recent wave of exiles pushed through the gates and have been effectively abandoned to their own devices. The lords will take the bittersweet reigns of their new manor-holds and the other player-notables jockey for the limited positions of power and influence in the fluid borderlands society.

While heavily-sanctioned trade continues back and forth to the motherland, the few traders and officials that make it through the gate are forbidden from sharing news from back home.
Hemmed in by the wilds and mysterious bordering sentient races ranging from the indifferent to the hostile, the hold has remained stable and self-contained--until now. The last wave of newcomers has pushed that containment to a tipping point; pressure for land, ambition, and the sheer boredom of frontier life are pushing the colony to look outward. "Grow or die" is the watchword of the day.
How Gameplay Will Work
The lion share of the play action will be in the monthly session. True to the campaign/off season conception of Borderlands each campaign season will take place over 1-3 sessions. The off-season in which most administrative, training, and other non-adventuring activities will be covered in brief emails between.
After a campaign season and off season is completed the calendar will be advanced from 1-3 years. Thus it's conceivable that players, like in Pendragon, may end up playing descendants of their original characters if we go a real-time year or more.
OD&D vs. Stormbringer
I left the decision open to incoming players and low and behold mirroring the two-party system is some good old fashioned gridlock with votes even divided between two systems.
Personally I lean toward the fresh start of Stormbringer—with a possible deal-breaking qualification. That being the singular fact that Borderlands as written and conceived is heavy invested in core D&D concepts: experience points and treasure as key motivators and the power arc of low/middle/high-level play (all of which map back into the premises above to boot).
Many portions could float autonomously and be adapted pretty readily, but there is a big stumbling block in that Stormbringer barely even has a mechanic for character improvement, and what it does have is the kind of bean-counting system (limited improvement when skill and attributes are checked) that I dislike.
Long and short is that I would have to hothouse an “emulator”, experience/improvement rules that approximate the carrots of D&D and the campaign's themes. Not an insurmountable task, but something I haven't wrapped my brain around completely.
Posted by Chris Kutalik at 4:20 PM