Day of the Dead

We do Dia De Los Muertos up big here in San Anto. Not Mexico big, but plenty big with a month of lead up down here in the Southtown art district and then the day of festivities and remembrances of ancestors past. Everywhere are the grinning skulls, the calaveras.
It is said that Dia came about as the product of old-fashioned Catholic-pagan syncretism. The death festival of Mictecacihuatl, the queen of Mictlan, the Aztec underworld, blending with the conqueror's All-Saints Day. The Lady of the Dead kept watch over the bones of those who passed thus the iconography. 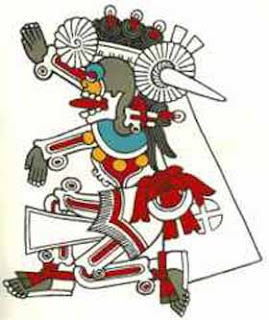 The Hill Cantons has been having its own Dia tribute...well at least the husband and wife team that play the long-time campaign pillars of Mandamus and Uma. Check out their altar complete with some Warhammer skeletons on loan from Desert Scribe's army.

It's a day later than the mopey remembrance holiday of my neurotic Czech ancestors, but I readily embrace the Dia's magical realism—and the chance to remember and celebrate those close who went off to trip through the Elysian Fields or ask Crom the riddle of steel (or something or other).
More on the RPG publishing coop a little later today.
Posted by Chris Kutalik at 9:44 AM