15 Things That Influenced Your Campaign? 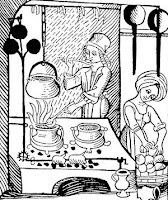 I was about to be a cranky contrarian and post the 15 games that had NO influence on me, but it would also make me a hypocrite since I already caught the wave over at someone else's blog.
So how about something a little different. What were the top 15 things that went into the intellectual stew of your campaign (actual existing or the Platonic Ideal one you are cooking)?
Hill Cantons:
Posted by Chris Kutalik at 10:51 AM