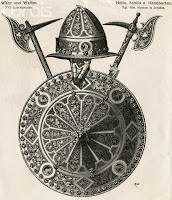 Buying gear for a starting character in old school D&D is often the most time-consuming step. For some players this is a favorite ritual. Should I go for that silver dagger this time or a mining pick and a bag of caltrops? Do I really need that lantern?


For others it's just a pain in the rear. The following random gear charts (revised from a year ago) are geared to the latter--or to the former who are crunched for time.


Note that I have integrated these charts with the chargen charts from the other day for a nice full package. You'll notice that the longer version, for instance, allows extra goodies and rolls dependent on your character's family background. The PDF of this version can be downloaded here.