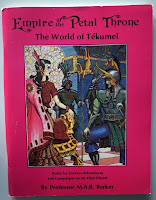 I came along this quote from M.A.R. Barker the other day about his next steps after dropping the needlessly-complex Swords and Glory second generation rules for adjudicating his wonderfully baroque Tekumel:
"After awhile, I began using the simplest possible system with my own gaming groups. As my old friend, Dave Arneson, and I agreed, one simple die roll is all that one needs: failure or success. The players don’t really care, as long as the roll is honest. Who cares if I hit with the flat of my shield, with the edge of my shield, or whatever? The story’s the thing!
A low score on a D100 roll denotes success; a high score signifies failure. A middling score results in no effect, or an event that is inconclusive. Thus, an 01 denotes the best possible result for the character, with perhaps more goodies than he/she bargained for: the foe goes down with one blow, the spell hits the exact target, the character easily swings up onto the mountain ledge. A 100 (i.e. 00), is a total, horrible flop, perhaps death or destruction: e.g. the opponent cuts our hero down, the poison works, the climber falls screaming off the cliff. A 45-65 = a natural result; the fight continues, the struggle to climb the peak goes on, and the like. A sliding scale from 01 to 100 gives all sorts of interesting ranges of success/failure."
There you go, no real rules just a ref and two ten-sided dice. Take that inveterate rules tinkers.
Posted by Chris Kutalik at 6:14 PM