Empire of the Petal Throne, the “Gamist” Early Years 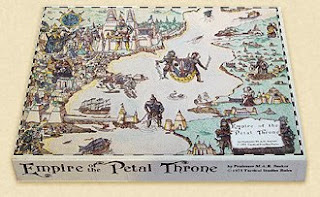 Empire of the Petal Throne is often referred to by old school D&D gamers as the “favorite game I never played”, a notion that I (sadly) cling to myself. Having developed a case of Tekumel fascination after an impulse buy of Barker's Man of Gold novel, EPT also became for me the one and only gaming system I bought in the entire two-decade period in which I swore off gaming.


At the time though, the fiddly-seeming, original D&D-flavored rules seemed far less interesting and evocative than the setting squeezed around. (Likely the nature of the Tekumel beast impels nearly all it's admirers—outside of the group still playing with Barker or other hardcore initiates—to be background-consuming admirers rather than hands-on practing admirers these days.)


These days my thoughts run about 180 degrees in a different direction. OEPT starts to look more and more as a fascinating set of tweaks and experiments building off a core of D&D rules and concepts when they were both still young and fresh. Which is why I find the remarkably well documented --if obscurely filed away--accounts of the game's early days so fascinating. It's a glimpse into a sweet-spot time when a richly-imagined setting firmly rooted in pulp science fantasy added to the excitement of an adventure game—a time before when acting out scenes from Tsolyani daily life became the end in itself.


Take the following account from M.A.R. Barker from the Runequest Con booklet I quoted from yesterday:

“When I first dragged my dusty tomes on Tékumel out of my basement in 1974, I thought of them as little more than background material for a “dungeon” to entertain my friends in our small gaming group at the University of Minnesota. I had been dissatisfied with the background-less, society-less “dungeons” then being played: when one came up out of a “dungeon,” what did one do? Go to a bar, drink, and fight? Go to a “hotel” and sleep until the next “expedition?” Wander around the streets of the “town” where very few buildings had interiors or even shopkeepers? Go to a “temple” to be healed or to “pray” for useful magical benefits, sorcerous weapons, etc.? Go on an “outdoors adventure,” using a set of rules designed to appeal to backpackers? The choices were limited...

The format of the game offered interesting complexities, but little was in print. One of our first referees, who had played with Gary Gygax and had introduced the game to our group, brought in a government. Being a medieval history major, his ruler was a Duke, and the social structure was feudal. The “church” for good folks resembled Catholicism, while the “temples” for “evil” characters were simplistic borrowings from Robert Howard’s Conan stories and the like. Admittedly, we had a great time.”

I love the telling honesty of that last line. The following, fascinating account from one of Barker's original players, Lady Anka'a, gives some texture to what the newly-synthesized campaign was like in its first year. One should note that this original OD&D-based campaign was not yet the OEPT version that was commercially published by TSR. Ironically it was Gary Gygax no less who convinced Barker to create the slightly more-divergent, percentile-diced based system.


(By the way all of this information was found on the Tekumel yahoo group. If you dig this stuff, you should mosey over there and join up. Among other things you can find an old email from the same lady that talks about how Barker developed the original manuscript after objecting to Mike Morand, of Old Geezer fame and the likely DM mentioned above, let his players ice the Archangel Michael. Whoa.)


“So it passed, that one August evening, hot and sticky, we all traipsed down to Klaeber Court--which was the office for the South Asian Studies Department, which Prof. Barker headed. It was not in the usual gaming place, because he wanted this to be private--he said then he planned to publish it and we said we would be discreet about it...

7:00 pm was the appointed time, but we got there and as usual, we hung around and chatted for a while. Eventually, Phil took out a number of green-covered mimeo booklets--two volumes each, and passed them around. Maybe 100 - 150 pages total.

We read through the booklets while Phil told us about the world, and we eventually started rolling up characters. In those days, it was pretty much a copy of D&D in stats and combat. We all got characters and looked through the books and decided what class we would be, fighter or priest or magic-user. It was different from D&D in that there were many more sociological things we had to deal with right at the start. Like picking a god to worship and alignment, though Prof. Barker said alignment was not as big a deal as in D&D, in other words stability and change were not automatically inimical...

Our origin, and that of all the original player characters, was that we originated from the Southern Continent (never seen on maps) and had decided to leave and cast our fortunes in the north. We were supposedly about 18-years-old or so. We each arrived on the shores of Jakalla in a small boat. We landed, sold the boat, and with the few coins we got from that and the clothes on our backs (and presumably a small pack of personal items) we entered the world of Tekumel, and the Tsolyani Empire...

At first the campaign was mostly a dungeoning campaign, with interesting twists. We first fought in the Tlakotani slave arenas for money and earned enough to outfit ourselves, to go into Jakalla's underworld, kill monsters and get gold--kaitars--so we could get better equipment and kill bigger monsters. And we would earn points and go up levels, and do more and better stuff. The usual D&D progression. The first six months or so was mostly that.

But it was fascinating. We encountered monsters we had never heard of before, and strange people and places. The idea this was a metal-poor world and such was made clear to us from the start, but we absorbed a lot through asking questions, and on our shopping trips to outfit ourselves. Later we ended up exploring most of the planet through use of the tube car system.

Those were some of the best adventures I have ever played in, in any campaign. They are still etched vividly in my memory.”

Barker goes on to say in that convention piece that “the original Empire of the Petal Throne was about as realistic a simulation as Monopoly is of Atlantic City of the 1930’s.”Personally though, I would love to see nothing better for Tekumel to return to its “gamist” roots, to a time when those barbarian outsiders explored vast, history-soaked underworlds by torch-light with nasty barbed chlen-hide swords in hand.


Instead of yet another clunky (or narrativist-rooted) edition of rules, why not a return full circle? Why not a whole new, old edition of OEPT that explicit posits itself as a tricked-out, rules-lite version of OD&D with a outwardly, less canonically-obsessed tone? Based on the sales of new, old rules sets presenting heavy designer-flavoring such as LotFP--which has effectively sold out on its entire first print run--my hunch is that the professor would have a hit product on his hands.
Posted by Chris Kutalik at 12:33 PM